November 1st. My Mother-in-law’s birthday. The lucky duck is off an yet another cruise for her birthday this year.  Although, MIL hasn’t always been so lucky with cruises. It was less than three years ago that we received the call to say that on an overseas cruise MIL had broken both legs while disembarking on an island transfer in rough weather. It’s a long winded story and not exactly my story to tell but given MIL has been on three cruises since then, it’s safe to say the whole saga didn’t quash her love of cruising.

As a general, retirement, rule of thumb… my in-laws enjoy one to two cruises each year. I’m rather envious. Having never been on a cruise. Day cruises don’t count!

You see, hubby goes to work at sea on a survey ship for up to a month at a time (occasionally longer). He also suffers from terrible seasickness, so refuses to entertain the idea of a cruise for pleasure. Naturally, I’ve entertained the idea of going on my own or hosting a short blogger cruise out of Fremantle but the cruise liners have only recently recommenced doing those short trips and basically, I don’t get to holiday with hubby nearly enough, so heading off solo, unless it’s for work (like my recent trip to Adelaide), doesn’t really appeal to me.

Coincidentally, our co-host for the Aussie Giveaway Linkup, Jody – Six Little Hearts, is an Ambassador for Carnival Cruises and it just so happens, there is currently a cruise for 4 up for grabs {SEE HERE}. Super easy entry too.  Now that’s a giveaway, I wouldn’t mind winning.

I had a rather interesting email land in my inbox. Considering I receive over 1k in emails a week, I’m surprised this one didn’t fall through the cracks or at least land in my lock and leave spam folder. I’m sharing the email in its entirety. At first glance it almost fooled me, especially given the Woolworths logo at the top. On a much closer glance… 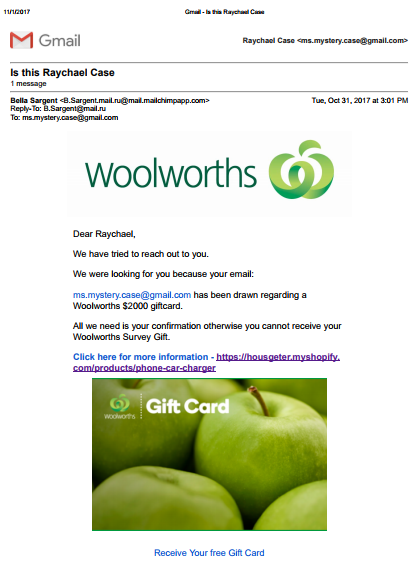 What do you think? Is it worth clicking on the link, filling in a survey and hoping I win a $2k gift card from what appears to be Woolworths? How can you tell if something is genuine and worth following up? As a general rule though, even when you are in the habit of entering a number of giveaways… it’s always best to assume that if it seems to good to be true… it probably is.

Which reminds me of the time, on my birthday, my sister received a winning phone call. She had won a car through a local soccer club raffle. As our family, my mother in particular are prone to playing pranks, she hung up on the caller. Even the official letter that arrived the following week didn’t convince her. It wasn’t until my sister took delivery of the new car that the big win actually sunk in.

I’ve been hearing a lot of competition and email spam horror stories of late. So much so, that I plan on sharing my top tips and hints for keeping yourself safe online, especially when you’re entering numerous giveaways. RIGHT NOW… it’s time to get the Aussie Giveaway Linkup started for another month.

You can review our linkup guidelines and meet our co-hosts Jody (Six Little Hearts) and Felicity (The Baby Vine) HERE. Although, Felicity is currently having a little time out with a new bub keeping her suitably distracted. 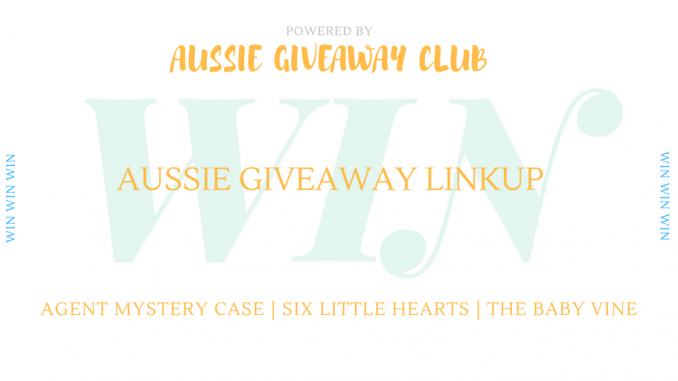 Have you had any wins this past month? Have you joined out our Aussie Giveaway Club Facebook group?