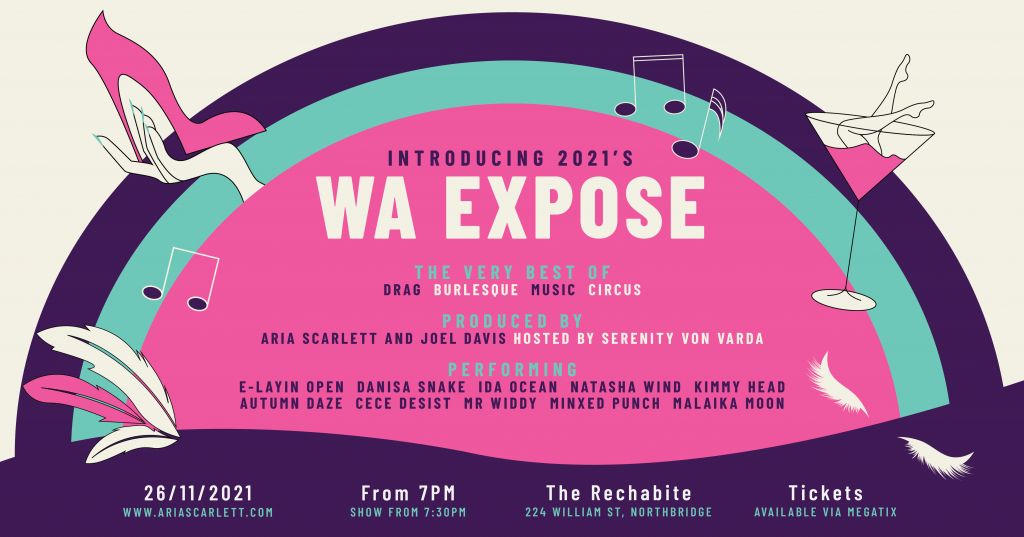 A Variety Show to Ignite the Senses!

Re-working the phrase ‘think globally and act locally’ WA Exposé is a rapid fire variety show like no other. A platform for audiences to experience drag, burlesque, music, comedy, circus and performance arts as a degustation menu.

The rapid fire concept gives all performers the exact same amount of time on stage and invites audiences to experience art forms they might not otherwise seek out. You have a high chance of falling in love with a new art form you might not have considered before. We pride ourselves on bringing performers to new audiences through an inclusive and welcoming space for artists and audiences alike.

WA Exposé consists of 12 incredible acts. Our host Serenity Von Varda is the current reigning Pop Princess and used their reign to start the Live Work Pose ball which raised thousands of dollars for Sisters Inside and the Dhadjowa Foundation.

One of the producers of WA Exposé, Joel Davis, joins us after a highly successful run as Jimmy in Priscilla Queen of the Desert at Crown Theatres earlier this year. Joel’s original electronic music has been featured on repeat at RTRFM earning them a spot on the In the Pines lineup and playing for WAM music festival.

Danisa Snake is an up and coming drag performer to keep your eyes on, having just been awarded Best New Drag Talent at the 2021 Proud Awards.

Cece Desist is a cabaret performer who debuted in 2019 and was quickly snapped up by Lady Velvet Cabaret, she has toured with Perth International Burlesque Festival and premiered her first solo production “Cece Desist’s Extraordinary Playlist” at the Ellington Jazz club in July of this year to great acclaim.

Creator and founder of WA Exposé, Aria Scarlett is known nationally for her work crossing music boundaries, having performed operatic vocals with aerialists, fire twirlers, dance, burlesque artists and even a fire breathing dragon! This year she added hip hop to her repertoire, touring with Downsyde and Moana Maytrix in the theatrical production Ice Land: A Hip h’Opera, produced by Yirra Yaakin Theatre company. Aria’s compositional skills allowed her to write new vocal lines for the production which received rave reviews.

WA Exposé has had incredible success since the debut in December of 2020, now in a new iconic venue, this instalment promises to be the biggest yet. This event is sure to sell out so be sure to secure your tickets now!