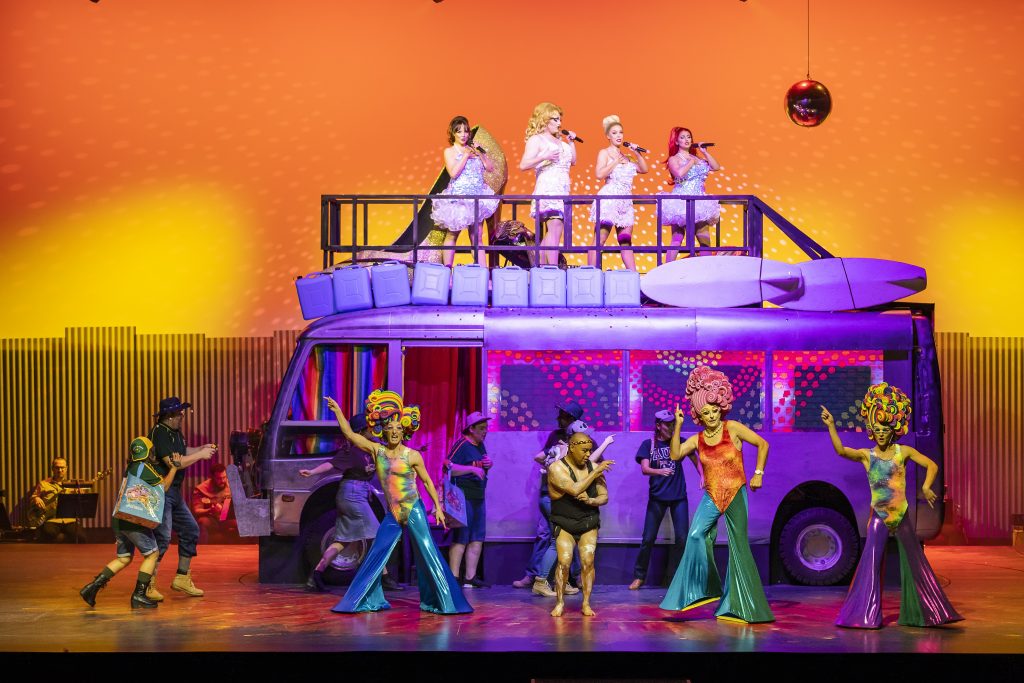 PRISCILLA – QUEEN OF THE DESERT – THE MUSICAL

Following on from the outstanding success of We Will Rock You and the recent The Boy from Oz productions, Platinum Entertainment opened the WA Premiere season of Priscilla Queen of the Desert at Crown Theatre Perth last night.

This stage adaptation of the classic Australian film “The Adventures of Priscilla, Queen of the Desert” tells the story of two Sydney drag artists, Tick and Adam, and a transgender woman, Bernadette, who are contracted to perform a drag show at a resort in Alice Springs at the behest of Tick’s ex-wife wife, Marion.

On their journey across the desert to Alice, travelling in a converted bus christened Priscilla, this unlikely trio encounters eccentric outback characters, misunderstandings both hilarious and serious, acceptance, love and the exuberance of performance.

I’m guessing you would have had to have been living under a rock not to be familiar with this iconic show. For a long while it felt like Priscilla The Queen of the Desert might never park their bus in Perth. Just when we thought we were finally getting our fix, with talk the show would finally make it in 2020, a pandemic hit. With so many shows postponed or cancelled of late, I know a lot of us have been snapping up tickets and then saying a little prayer that we might actually get to use them.

Even before the welcome to country from Samuel Pilot and possibly due to the cancel culture we now live in, the production brings into focus with a voiceover the fact that the show was written in 1994 and includes all of the homophobia, racism and prejudice rampant at the time.

Rather than write off some of these outdated and unacceptable practices to rewrite history, it’s refreshing to see that nothing has been swept under the carpet here. Instead the production acts as a timely reminder of just how far we’ve come by serving the piece as originally written, ping pong ball scene and all.

There’s a whole lot to love about this high energy, road-trip comedy. Directed by Trevor Patient and with a stellar cast of 30 featuring Cougar Morrison as Tick (Mtizi), Nick Mayer as Adam (Felicia) and Peter Rowsthorn as Bernadette, all dishing up incredible performances and vocals to write home about.

As does Melissa Gill as Marion, Luke Hewitt as the lovable Bob and Maita del Mar as Bob’s ping pong popping wife.  Samuel Pilot who gave the welcome to country at the start returns as Mike, with Joel Davis playing Jimmy. The character of son Benji is shared by Angus Roberts, Logan Bin Bakar, Felix Steinwandel and Jimmy Jurjevich.

Dean Misdale mingled in the audience prior to the show as larger than life Diva, Miss Understanding. Happily posing for selfies before racing to the stage to kick start proceedings, expertly whipping us all into a frenzy (not that the audience needed much encouragement) before joining forces to form the show’s impressive Diva collective with Kelsey Skinner, Morgan Cowling and Ruby Voss.

The entire ensemble, who don’t seem to have a moment to rest in this fast paced production, deserve a mention as does the crew behind the scenes. The super quick outfit changes alone would have kept everyone on their toes.

It’s a huge credit but no real surprise that under pandemic conditions and hard border closures Perth can pull off something so impressive given we have so much local talent on offer and currently trapped in the state. If you’ve been looking for the pandemic positives, this has to be up there.

I wish I had the time to single out every single member of the cast. Perhaps a few feature posts here once the dust settles, starting with local comedian Janelle Koenig who gave me (and the rest of the audience) some of the most laugh out loud moments with her portrayal of Shirley. 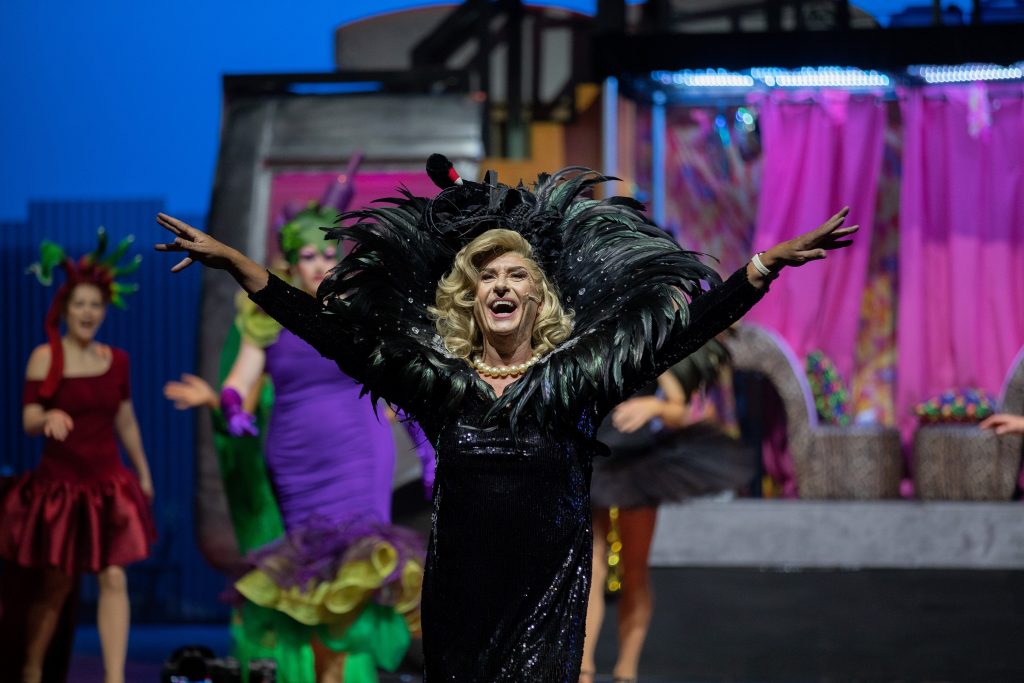 Local stand-up legend and audience favourite Rowsthorn, most known for his role in Cath and Kim is divine as Bernadette, hitting all the right notes with a potentially award-winning performance. For this role, Rowsthorn combines a vulnerability element to his quick witted comic timings and stage presence he has perfected over the years. Having said that, I’m not entirely sure if it was a case of opening night nerves or par for the course character wise but I did feel Rowsthorn fudged a few lines early on in the piece and took a moment to find his groove but seriously, what a groove.

I’m told by friends over East that due to logistics with stage dynamics being on a slightly smaller scale, we have a toned down version of what has gone before which sees us miss out on the aerial elements of the show.

With the high energy both on and off stage, I find it hard to believe the production could be any more spectacular. The fact we have an actual bus on stage, combined with the quirky and efficient lazy Susan centre stage that gives an almost conveyor belt delivery to proceedings, is a big part of that. The design easily taking us from suburban Sydney to outback Alice and more than a few colourful places in between.

The bus, which is actually an old school bus that one of the cast members used to drive is more than just a prop but a big lovable character in itself. Road tripping has never looked so enticing.

Of course there are all the bells and whistles in terms of visual effects you’d expect from the Queen of the Desert. It might be just me and I might just be missing the creative elements at play but I felt the lighting fell short on a couple of instances. Initially when Bernadette takes to the stage in mourning practically in the shadows. Then again towards the end when Tick and Adam move to the runway independently for a little fanfare and the spotlight doesn’t exactly shine on them. Given the performances, especially vocals of all three they deserve the spotlight and more!

Which brings me to the toe-tapping soundtrack. With a catalogue of iconic pop songs such as It’s Raining Men; What’s Love Got to do with It; Shake Your Groove Thing; Hot Stuff’; Boogie Wonderland and I Will Survive, just to name a few, you might be tempted to sing along loudly like the person to my right.

I’m not sure if there is an immersive sing-a-long night for this production but perhaps hold the urge to sing along too loudly or too much. If you can. PLEASE!

Just when you think you’ve finished the feast that is Priscilla Queen of the Desert and it’s time for the curtain call, they roll out the dessert cart by way of an iconic Australiana fashion parade. With the ensemble showcasing a different themed designer gown for a finale that is a fast and fabulous tribute to all things Aussie.

Personally, I would have liked to have hit a pause or go slow button for this part of the proceedings. It was just too much to take in at once. Each glorious gown only gets a moment in the spotlight with the gown’s name on a banner to one side of the stage and the designer behind the creation to the other. It was very much a case of blink and you potentially miss the finer details.

I’ve gone looking for a highlight reel or mention in the program that lists the gowns and designers. As far as I can tell, there isn’t one. I’m guessing that would spoil things. So no spoilers from me either. Having said that, there was one particular gown that paid homage to one of our masked local heroes that had the audience in a fit of giggles.

Fresh out of lockdown and thankfully mask free, the opening night audience was in fine form. With an unbridled enthusiasm from the word go and justifiably so. To a point. While their standing ovation at the end of the night was more than warranted, it’s a true credit to the production that they managed to get the opening night VIP sector off their feet at all. I’ve seen this crowd remain seated for productions of a similar calibre and have been left scratching my head.

Priscilla Queen of the Desert is the crazy and colourful party bus Perth needed post lockdown.

Queen of the Desert

[Worth Casing NEWS heads up… This month we will be discussing the fact people feel the need to munch, crunch and talk or sing their way through a production at our next member chat. Anyone else remember a time when you headed to the theatre in your finest and food was frowned upon?].