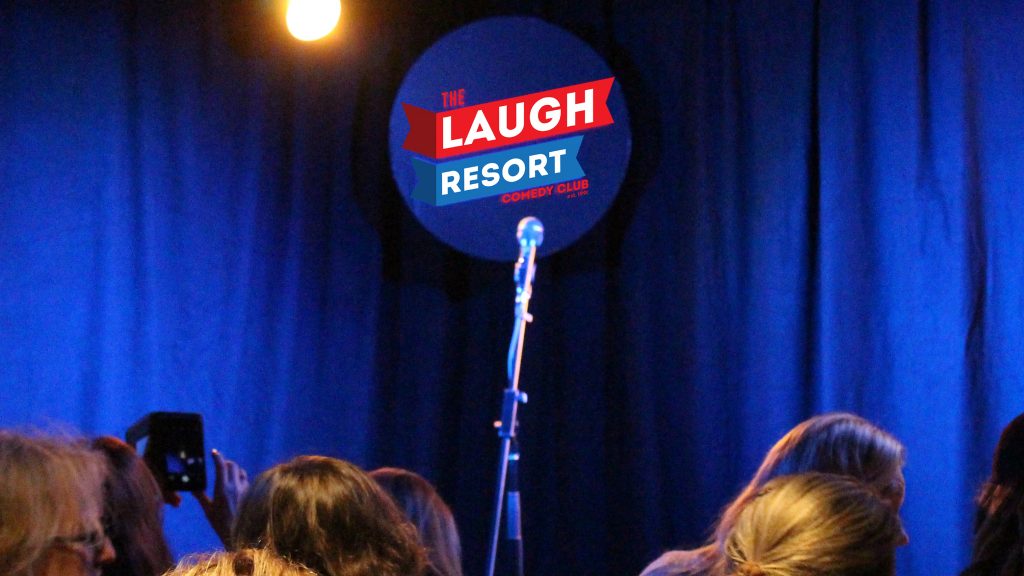 A World of Laughs

I don’t know about you but after all the craziness and confinement of the past year I could do with a good laugh right now. More than a good laugh. But in a safe, still somewhat socially distanced way. Which is why The Laugh Resort Comedy Club and their 9 at 9 sessions are my first point of call for comedy this Fringe.

I started last year (and last Fringe) attempting to jump out of my comfort zone as much as possible. Life is short and all that. Fringe and stand-up comedy in particular are great places for pushing the envelope when it comes to comfort zones. I was really getting into an uncomfortable groove. Thoroughly enjoying bringing a few friends along for the agonizing ride when the universe decided it might like the last laugh by introducing a pandemic.

Having gone from covering events and doing reviews, which had me out 4 to 5 days/nights of the week (if not more), to complete isolation for several months (being immunosuppressed I wasn’t taking any chances) was probably more out of my comfort zone than I ever thought I would go.

Oddly enough, after months of fighting the good fight with a huge case of cabin fever, I eventually found comfort in that existence. Mind you, there were several organised immediate family theme nights. As well as a lot of intervention from family and friends who helped me stay connected and sane from a virtual point. There was also a big variety of new and emerging  platforms for online talent to keep me (and the rest of the world) amused. Comedy and The Laugh Resort’s online programs were a big part of that.

As I slowly and safely reacquaint myself with the real world, I’ve been hesitant to sign up for too many shows this Fringe. As expected with the current state of play, some shows I had signed on to review for interstate visitors have been cancelled due to reintroduced border closures. Crazy times. Even still, I’m super keen to paint the town Fringe as much as possible. Although, I can’t see myself breaking my 56 shows in one year record. What a fun, fabulous and completely exhausting time that was.

This Fringe, Perth’s longest running comedy club presents a curated season of 20 shows in 23 days. Featuring no less than 60 top homegrown and visiting guest comedians from London to Tokyo and Adelaide to Exmouth. Guests who either made it in before border closures or who found themselves ‘trapped’ here during the pandemic. All adding variety to the comedy buffet on offer this year. Featuring sketch, musical, beatbox, storytelling, interactive gaming, live podcasting, queer comedy and pure stand-up. There’s more than a little something for everyone with this year’s line-up.

We attended The Laugh Resort’s preview Fringe show last week and were not disappointed. It was a whole lot of laughs from start to finish. Not all the performers on the night were my cup of tea. That isn’t necessarily a bad thing. With hubby my plus one that night and myself having very different comic appetites. The bite sized format of the show makes this an excellent way to pick and choose the comedy you want to feast on during Fringe.

In terms of comedy, with so much on offer this Fringe, The Laugh Resort’s 9 at 9 was always going to be my go-to. Located upstairs at The Shoe Bar and voted ‘Favourite Venue’ by the WA Comedy industry 2020, I love the venue just as much as the format.

One of my favourite comedians last Fringe was Gordon Southern. We caught a snippet of him during a 9 at 9 performance and were first in line for his very next show. Having found himself trapped in Adelaide during the pandemic Southern returns to Perth Fringe with his new show Nisolation. It’s all about accidentally moving to paradise (aka Adelaide). If you’re one of our email subscribers you would know Nisolation is right up there on my ‘worth casing’ Fringe list this year. As are all the 9 at 9 sessions. No surprises there.

With 9 at 9 showcasing nine performers over 90 minutes, if an artist isn’t tickling your fancy you’re only stuck with them (and in turn, they are only stuck with you) for a short set. It really is the sweetest way to sample comedy.

On the other hand, if you find yourself contemplating opening a bag of crisps and heading to sit on the stage (uninvited) to stare up at a performer because in some delusional state of play (I blame being in confinement for so long) you think it is in keeping with the set being dished up… I would suggest you resist the urge and instead purchase tickets to their show.

Now waving, from a safe distance, to comedic storyteller and host of the preview show, Jon Bennett. And yes, I may have contemplated grabbing someone’s bag of crisps and joining Jon on stage at one point. And yes, for everyone else… this is one of those ‘you definitely had to be there’ moments.

There were a hell of a lot of those laugh out loud ‘you had to be there’ moments at the preview show. So much so, that rather than give you a play by play of what had me in absolute stitches I would suggest you head over and case The Laugh Resort’s Instagram and Facebook pages. They often run giveaways and offer promo codes for discounts for their followers.

Having a reduced audience capacity in such an intimate venue thanks to Covid19 regulations means you are going to need to snap up tickets early. Also, I’m pretty sure your ticket will give you a 20% discount on meals at The Shoe Bar. It’s also a great spot to debrief over a drink after the show. We spotted a Long Island Iced Tea cocktail jug on the special board on our last visit. I’m really hoping that makes a reappearance when I’m back with friends this week!