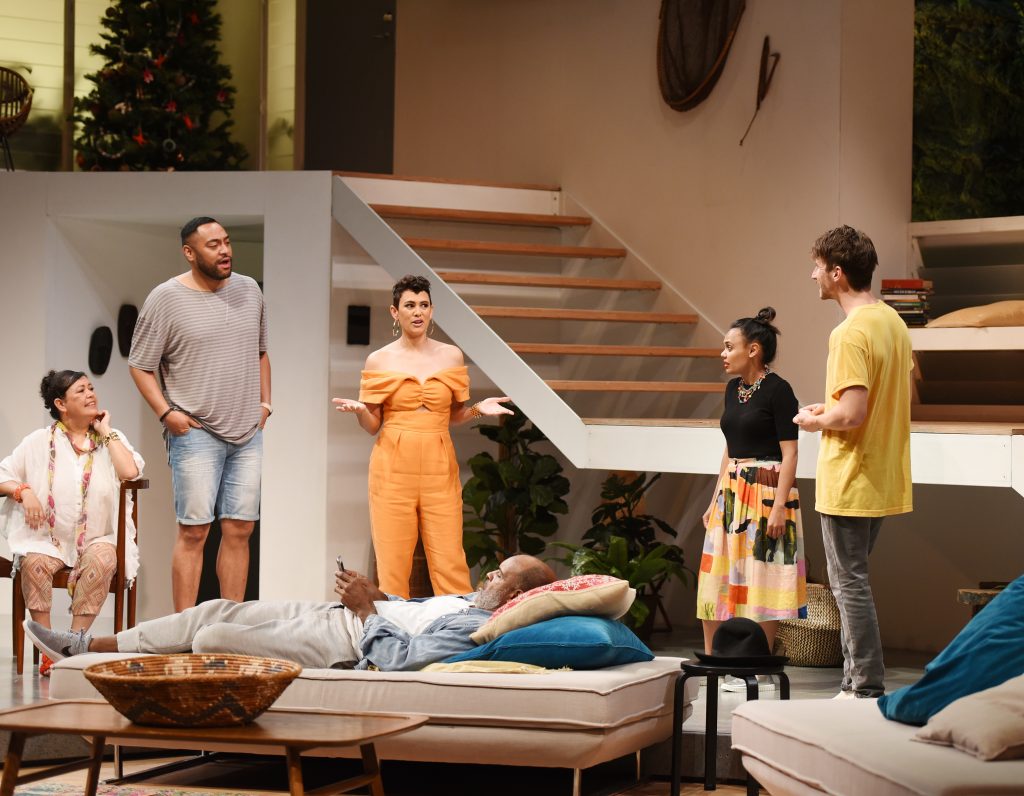 Black is The New White centres around an Indigenous family meeting their daughter’s white fiancé for the first time over Christmas dinner. It’s billed as a mix of Guess Who’s Coming to Dinner and Meet the Flockers and if that wasn’t already a recipe for Christmas dinner disaster, just throw in race relations, politics by way of both fathers being former political rivals and you are just getting started. It’s quite the party. Political correctness, putting on a show and playing nice fly out the window.

For a number of reasons, I’m reminded of my first foray into acting at the ripe old age of 8 where I played an aboriginal as part of a production at my Catholic primary school. I’m under no misconception that I was chosen due to being the most tanned student in my year. Not a natural occurrence. More a case of living at the beach and growing up with a mother who thought getting a tan was a good thing. I spent most of my youth thinking I had olive skin (I don’t!). There’s a photo of me at the beach as a toddler eating a black plum where I’m basically the colour of the plum. It won’t surprise you to know that I was often asked where my mob were from. I never really knew how to answer that one. I still don’t.

Over the years, I may have forgotten the context of the production, the part I actually played and my lines, but I haven’t forgotten the bad taste it left in my mouth. Even as an 8-year-old. Even with super tanned skin, the school still saw fit to paint my skin black for the production. I was the only person that had an issue with that. That’s how it was back then. I imagine if you ran the same production now, it would be approached with more thought and sensitivity or not at all.

I’m also reminded of the first piece I wrote under Mystery Case over seven years ago… Fifty Shades of Black. A piece in reference to my 99.9% black wardrobe at the time. Fifty Shades of Grey was doing the rounds and that was the only reason for the title. Nothing more.

I didn’t give political correctness much thought back then, it was more a case of playing on words and having a lot of fun with it. The PC side of social media town and life, in general, have been a huge learning curve with my dry humour. Which is why this production and Nakkiah Lui’s brilliant style of writing is like a breath of fresh air.

I’m half tempted to take a leaf out of playwright Nakkiah Lui’s books, throw caution to the wind and have a lot of fun here, starting with the full-frontal nudity in the first five minutes with a performer’s member literally swinging rather violently in the breeze for all to see for a good few seconds (feels like ten minutes or more when you are seated next to your mother and aunt).  Lui hasn’t thrown caution to the wind at all, this is contemporary indigenous theatre at its funniest and finest.

It wasn’t all laughs though. There is a serious undertone. A message or two about native title and white entitlement that manages to get through all the frivolity. It’s brilliantly written and executed. There’s also a sense of unease. Well, there was for me. Even the neatly tied up musical ending had me feeling a little left of centre as did a lot of what unfolded.

As the Christmas get together chaos unravels during Black is the New White, I generally felt more ill at ease than anything else. Don’t get me wrong, I still laughed as hard as the next person for most of the show but take race relations, politics and drug use out of the equation and there are a lot of similarities to the chaos I’ve experienced at Christmas growing up with a dysfunctional family. Not so much since moving to Perth where it is just our little family. Can’t say I miss the chaos and drama or that I’m keen to relive it but gosh it makes a nice break to sit back and laugh at someone else’s dysfunction.

The characters and context were more than relatable and it’s hard for me to pick a stand-out performer or a take away moment from the show. The cringe-worthy foot in mouth disease from white fiancé Francis Smith (Tom Stokes), the banter between the political rival fathers, the interactions between designer daughter Rose Jones (Kylie Bracknell [Kaarljilba Kaardn]) and her footballer hubby Sonny Jones (Anthony Taufa) were all hilarious highlights. 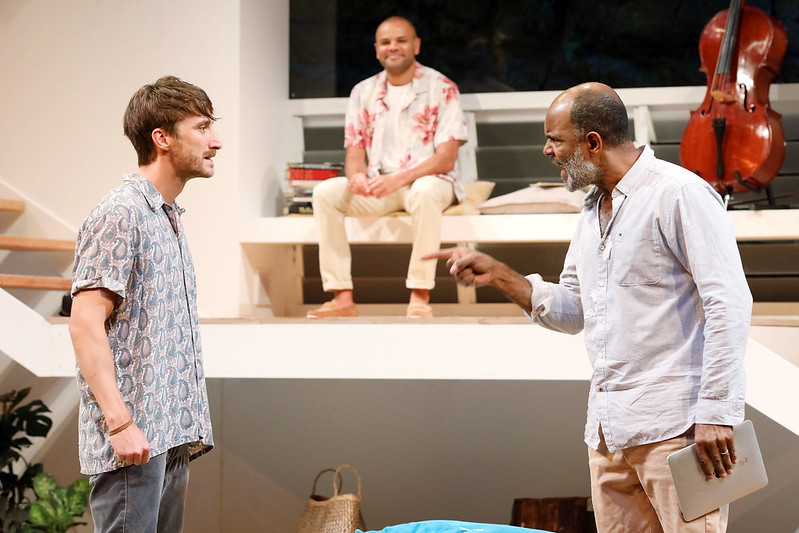 I could easily head back a third time just to watch the narrator Luke Carroll in action. I was impressed with his performance in The Torrents earlier in the year and even more so with this production. Even in the background, Carroll has a certain charisma that commands attention.

We were fortunate to have seen Geoff Morrell in Speaking in Tongues at the Stables Theatre, Darlinghurst, way back in 1996. He didn’t break out any on-point dance moves in that production but he left a lasting impression. He plays the part of Dennison Smith here and his comic timing and moves like Jagger are a work of art. Vanessa Downing, who I vaguely remember as the first Pippa in Home and Away, plays Dennison’s wife Marie Smith and is probably one of my favourite characters, especially her little, what I’m calling, dance with death across the stage following the food fight.

Melodie Reynolds-Diarra who plays mother Joan Gibson and Tony Briggs playing father Ray Gibson both gave incredible performances but deserve an award for holding that leg cocked, mid foreplay scene when the narrator hits the pause button on them. A lot like when Stokes arrives fully naked on stage, it’s hard to know where to look and even harder not to laugh out loud. Miranda Tapsell playing lawyer daughter Charlotte Gibson ties this fabulous cast together perfectly, giving a beautiful and believable performance in the process, even if some of the dialogue was a little less than palatable.

For the record, I’m not easily offended and didn’t have an issue with what was served up on a platter for this production. I took my mother and aunt, who were visiting from interstate together with hubby to a preview show earlier in the week and my favourite plus one (aside from hubby) on opening night. As far as I could ascertain they all laughed and loved the show as much as I did. Having seen the preview, I may have asked my plus one for opening night to read the warnings (adult themes, nudity, coarse language and drug use) before accepting my invitation.

There really is a lot of coarse language throughout the show but to me it is well within context, almost slipping off the tongue and flowing like the free-flowing champagne over Christmas lunch. I did question the need for some of the more vulgar verbalisations. I think they could have easily been swapped out to something a little more palatable and still had the same impact just less of the shock value, which I suspect is exactly what Nakkiah Lui was going for. In the end, it more than works. Coarse language, nudity and adult themes aside Black is The New White is an intelligently written piece that’s on point in so many ways.

The opening night hype did seem to get the better of one or two actors who I believe fudged a couple of lines. They quickly recovered, so if you hadn’t already seen the preview show earlier in the week, you would probably be none the wiser. If you blinked, you would have missed it and the quick recovery each time might indicate the slips of the tongue were part of the act. On both nights, I did have trouble hearing some of the dialogue over the laughter, but I know if the actors kept stopping to wait for the laughter to completely subside, the production would be a few hours long and, in the end, I don’t think I missed anything too crucial.

Having experienced the preview show upstairs in the very back row, I can honestly say you don’t need to shy away from the seats upstairs at the back. You actually get a wider perspective and pick up on little things (not talking about anyone’s member here) going on in the background that aren’t as easy to spot when you’re closer and more focused on front and centre. I can also confirm the show is just as funny if not more the second time around.

Fifty shades of hilarious, Black is The New White takes race relations and political correctness to hilarious new levels. If you are not easily offended and love a good laugh, you will love this production!

Black is the New White