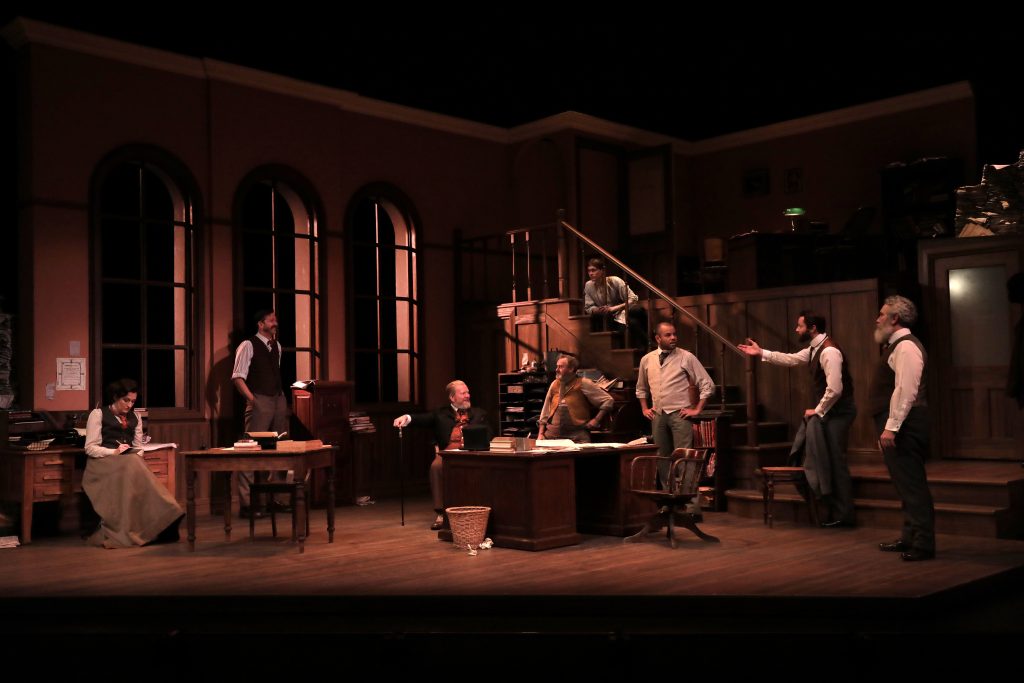 Oriel Gray’s name will take a prominent place in the history of Australian Theatre.” – The Daily News, Perth (1950)

Thanks to Clare Watson and The Black Swan Theatre Company Oriel Gray’s name is finally up in lights! Neon lights at that, with Helpmann Award-winning comedian and actor Celia Pacquola front and centre bringing this neglected Australian classic back into the light.

Oriel Gray’s The Torrents is a period piece set in the 1890s goldfields in the small town of Koolgalla. A newsroom comedy with J.G. Milford (Celia Pacquola) arriving in the town via train to take on a job at the local paper. Smart, savvy and more than qualified for the job, J.G’s suitability for the position only comes into question when it’s discovered the J stands for Jenny.

Jenny’s arrival in town coincides with a trailblazing engineer’s outrageous idea to bring irrigation to the community and debate rages about whether the town should give up mining for a more sustainable economic future. A debate that never gets old it would appear. Meanwhile, newspaper editor Rufus Torrent and his son Ben are vying for Jenny’s favour, even as she pulls apart their chauvinistic assumptions that a woman’s place is in the home and in turn opens the door for the ‘new woman’.

BACK TO THE BEGINNING AND AROUND AGAIN…

I’m guessing there will be a number of conversations surrounding this latest offering from the Black Swan Theatre Company. People might question why this was left on the shelf and only professionally produced once previously in Adelaide of all places in 1996. Others might question the risk director Clare Watson has taken by opting to cast a newbie to the theatre in the lead role. There’s also the set design and period that’s more in keeping with the original script rather than spinning a modern-day twist.

Are they risks though? To a degree. While I don’t believe Watson opted for any easy options here either, by Grundy and not to gild the lily…  it’s the stellar cast and calibre of theatre on offer, as well as Watson’s devil in the detail approach with bringing it all together, that pays the ultimate and what would seem long overdue homage to playwright Oriel Gray. Questions aside, this is an exceptional piece of theatre.

The back story behind this play is almost as intriguing and storytelling worthy as the play itself. So, it’s apt that Pacquola does a pre-show introduction out of character to get the audience up to speed. You get to meet the actor we’ve come to know and love on Australian television through shows such as Eutopia, Rosehaven and Have You Been Paying Attention. Skinny jeans, boots and all.

I initially thought the pre-show improv might have been a special treat for opening night but having returned for the Friday matinee session, with busloads of secondary school children, where the intro from Pacquola was much the same, just adjusted slightly to the school audience, it’s an endearing part of the production. I did question for a moment why Pacquola wasn’t in character and if the familiarity factor would mean I would need a lot of convincing once in character but for the most part, it’s a clever touch interlocking the present with the past, giving the audience a little more of Pacquola than you bargained for and possibly giving her first appearance in character more impact.

While Pacquola is the lead or star of the show and her performance as far as I could tell was faultless, all actors delivered exceptional performances in their own right and deserve just as much recognition. That’s not to take away from Pacquola’s performance, her first foray into theatre, it’s just hard to play favourites with this ensemble piece.

Over two levels with multiple entries the set is a work of art. The wooden panelled newsroom where the play takes place with editorial paraphernalia from that era adds a quintessential and authentic charm to the piece. The arched timber windows adorning the set also help with lighting that gives the set a filter that moves with the mood on stage.

The devil really is in the detail with this production and it was only after seeing the show a second time, where I could take the review hat off, that I could truly appreciate the level of detail. I don’t normally find time to revisit a show, especially in a week where I had five films, six shows, a meet and greet with Matt Preston and an expo to cover but I’m so glad I did. It was even better the second time around.

Now showing until June 30 before heading to Sydney!