From the casualty tents, the fever wards and the operating theatres of the palace; through the streets of Cairo during Ramadan, to the parched desert and the grim realities of war, Pamela Hart, beloved bestselling Australian author of THE WAR BRIDE, tells the heart-wrenching story of four years that changed the world forever.

It’s 1911, and 21-year-old Evelyn Northey desperately wants to become a doctor. Her father forbids it, withholding the inheritance that would allow her to attend university. At the outbreak of World War I, Evelyn disobeys her father, enlisting as an Australian army nurse bound for Egypt and the disastrous Gallipoli campaign.

Under the blazing desert sun, Evelyn develops feelings for polio survivor Dr William Brent, who believes his disability makes him unfit to marry. For Evelyn, still pursuing her goal of studying medicine, a man has no place in her future. For two such self-reliant people, relying on someone else for happiness may be the hardest challenge of all.

As part of the official book blog tour with Hachette Australia for this book, I managed to inhale THE DESERT NURSE in two sittings. It could have easily been just the one sitting but time and work constraints didn’t permit it on this occasion.  Having said that, for me the story isn’t so compelling that I struggled to put the book down but there is a lot to love about Pamela Hart’s style of writing and the story itself that you’ll soon find yourself seeking out a quiet corner for some alone time with this book.

There’s a certain charm to the characters for starters, that helps you develop a vested interest in them early on in the piece. The long-winded more miss than hit romance between Evelyn and William, the more dashing other potential suitor and the war-torn backdrop amid the Australian Army hospitals of World War I Egypt.

War and romance interlock impressively in THE DESERT NURSE but make no mistake, for the most part, as the book title would suggest, this is nurse Evelyn’s story. Evelyn’s struggles to distance herself from her overbearing father to make a name for herself as a nurse with a view to one day becoming a doctor is a truly inspiring story, with or without the love interests, given the era. Love, however, was always going to be on the agenda. This is a grand love story set in the theatre of war after all.

Much like the war at that time, I found Evelyn’s journey to love (as well as becoming a doctor) frustratingly slow and long-winded with her doing everything in her power to avoid it for the most part. Missing the inevitable, right under her nose obvious that could have easily led to a happy ever after and a medical degree a lot sooner but where is the grand drawn out love story in all that?!

There were several moments throughout the book where I wanted to shake some sense into the characters. Evoking this level of frustration did, however, cement my connection to the main characters, also providing me a real sense of how Evelyn would have felt growing up with her controlling father after her mother died.

Without wanting to give too much away (because we aren’t in the business of spoilers here), the book finishes with an element of closure with the war ending but like most good books, I didn’t want this book or Evelyn’s story to end there. I do however love the fact that an injured soldier and his wife, who make a brief appearance in this book, are also featured in THE SOLDIER’S WIFE,  which is what I suspect I will be reading next. Just as soon as I can get my hands on a copy.

‘This book is heart-wrenching proof that all’s NOT fair in love and war, especially for a lone woman in a man’s world’ Valerie Pary 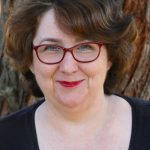 Pamela is an award-winning author for adults and children. She has a Doctorate of Creative Arts from the University of Technology, Sydney. Under the name Pamela Freeman she wrote the historical novel THE BLACK DRESS, which won the NSW Premier’s History Prize for 2006.

Pamela is also well known for her fantasy novels for adults, published by Orbit worldwide, the Castings Trilogy, and her Aurealis Award-winning novel EMBER AND ASH. Pamela lives in Sydney with her husband and their son, and teaches at the Australian Writers’ Centre. THE DESERT NURSE follows her bestselling novels THE SOLDIER’S WIFE, THE WAR BRIDE and A LETTER FROM ITALY.

Thanks to Hachette Australia you could win your own copy of Pamela Hart’s THE DESERT NURSE. To be in the running just click on the image below to enter.

Our virtual book club with reviews, giveaways and the occasional virtual cocktail. Our online reviews don’t provide spoilers, just enough to paint a picture. The real conversation happens after you’ve also read the book with our On the Bookcase community. Want to join the conversation or become one of our mystery book reviewers? FREE membership is opening up soon.

I’m an affiliate for Booktopia, so if you purchase via a link here you won’t pay any extra (you may even manage to get a bigger discount) and I may eventually be able to purchase a bookmark or even a discounted coffee at some stage down the track.