In terms of Fringe shows this year, I’ve got more than a few already under my belt. Some gifted tickets, others purchased to support local friends/talent. My ability to tell it like it is, isn’t influenced by gifted tickets or knowing a performer first or second hand. Having said that, I’m not in the business of posting overtly negative reviews, so not all shows I’ve seen rate mentions on social media and very few warrant a full review. Which brings me to last night’s show. 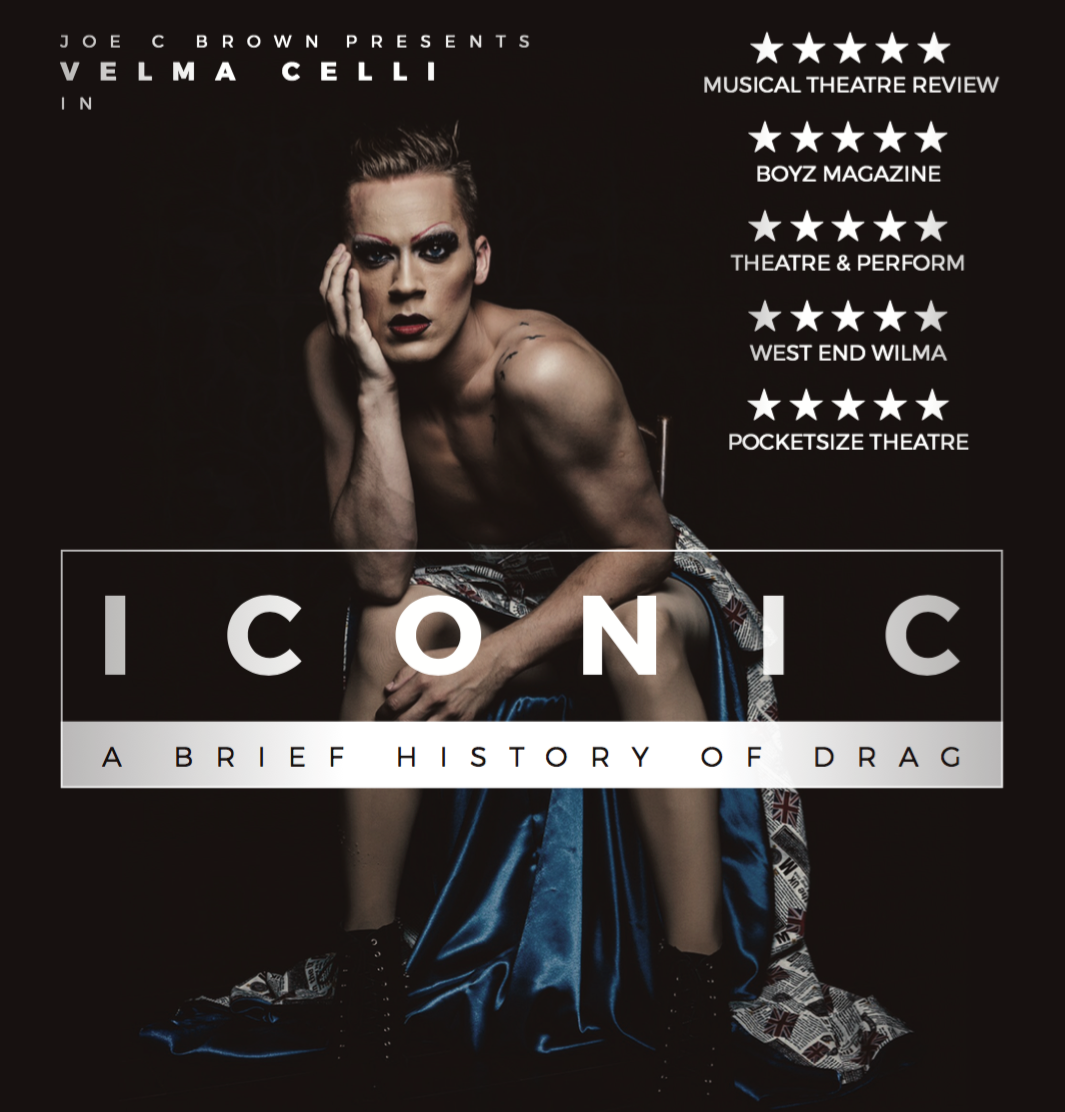 ICONIC – A BRIEF HISTORY OF DRAG

A show I could easily see myself fronting again and again and again. In fact, I’m contemplating tackling the nightmare parking in Northbridge and fronting up again tonight, my only night off since returning from the Gold Coast earlier in the week, with my next night off not for another two weeks. Yes, this show is that good and I’m not one to be easily entertained or amused, so that really is saying something!

IAN STROUGHAIR, the man behind the makeup of the sensational VELMA CELLI, takes us on a passionate pilgrimage through the most iconic drag moments of film, stage and popular culture. Following sell-out performances in the UK, ICONIC – A Brief History of Drag, hits Fringe World 2018 for 10 nights only at De Parel Spiegeltent in the Pleasure Garden until February 25.

Stroughair has performed in hit shows such as Cats, Fame, Chicago and Rent where he received critical acclaim for his portrayal of Angel. With 5-star praise from reviewers across the globe, Velma Celli is a powerhouse who hits all the right notes in his latest show. A wonderfully witty colourful cabaret comprising a collective mix of the music that we all know and love, Velma’s flawless vocals will have you glued to your uncomfortably hard fold up seat.

Due to back to back review shows, I missed opening night in Perth and had to contend with what felt like most of Perth who were in Northbridge for the Saturday night performance.

The opening song, which in drag terms, was more than a little before my time, meant, unlike the rest of the audience, it took me a little time to warm to the occasion and the performer but once warm, some might say charmed into submission, I didn’t want the evening to end. I stood, like the rest of the audience at the end, willing our standing ovation to bring an encore and prolong the inevitable end.

Two songs and some witty working the audience banter in and my thoughts turned to the Rocky Horror Show which opens in Perth next week. Given they are already down one leading Drag, I wondered if an alternative backup (should they need one?) wasn’t within striking distance. My thoughts cemented, when ‘Sweet Transvestite’, later popped up on menu with Straoughair making the song and the stage their own.

And this stage was made for Stroughair’s drag alter-ego Velma. The back-up singers to me were a little weak in parts but rightfully (and supportively) so. As you would expect from such a strong character, Velma owned the stage both in terms of vocals and stage presence.

Under all the glitz, glam and sparkly stiletto heels, Velma’s entertaining guide to a history of drag, provided an insight into drag through the years via quotes, stories and reminiscing.  Carried out in such a way that truly captivated and charmed most of the audience. I personally didn’t want anyone or anything, coming between me and Velma from the second song in. Which is why I was completely dumb founded when someone in front of me (with a much better vantage point) left their seat, to go to the bar with just ten minutes to go and I was almost wanting to punch the person behind me that talked the entire way through, until I realised they were interpreting for a friend that spoke little English.

It’s a 4.9 out of 5 worth casing stars from me.  What would it take for me to make it 5 out of 5? That’s between me and Velma but in all seriousness, taking ‘brief’ out of the equation. Like I said earlier, I just didn’t want this show to end.

Highlights of the night and there were more than a few included an impressive rendition of Bowie’s ‘Under Pressure’, the hilarious Diva vocal impersonations (everyone from Cher to Britney) and of course the encore performance which I’m not about to go into specifics and spoil things for you. Go case it for yourself!

ICONIC – A BRIEF HISTORY OF DRAG now showing at De Parel Spiegeltent, Fringe World Pleasure Garden until 25th February. You can find out more and purchase tickets (from $26.50) through www.fringeworld.com.

I was gifted tickets to this show. As you would know by now gifted tickets, products or services do not impact my ability to tell it like it is.