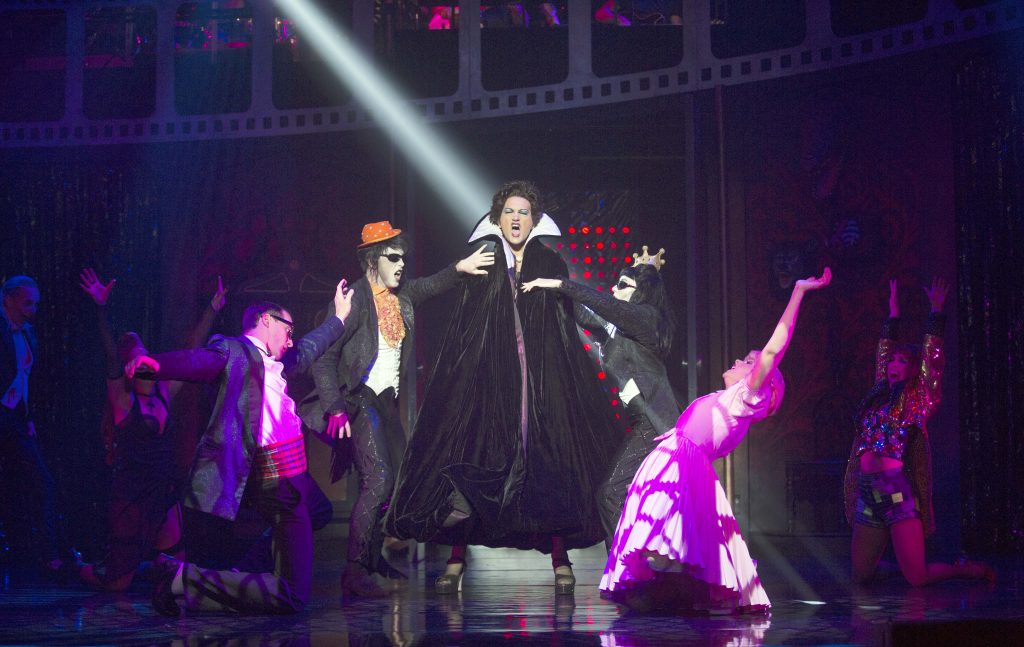 It’s just a jump to the left…

Having attended a quick media call earlier in the day and whet my whistle, I thought I knew what was coming in terms of the new lead Adam Rennie, who took over the role of Frank N Furter a short time into the Adelaide leg of the tour. Taking over from someone, I grew up with on the Central Coast. Someone, that over the years had made the show and the part his own. It was hard, even for an old seasoned reviewer like myself, to keep the review hat firmly in place and not draw comparisons or hold certain expectations.

I must admit, much like my overlooked mid-morning coffee, I was luke warm following the midday media preview. Captivated to an extent but not entirely convinced, which had me nodding in agreement with the promo posters which lined the walkway leading up to Crown Theatre…

‘Adam Rennie is a star in the making’ The Courier Mail 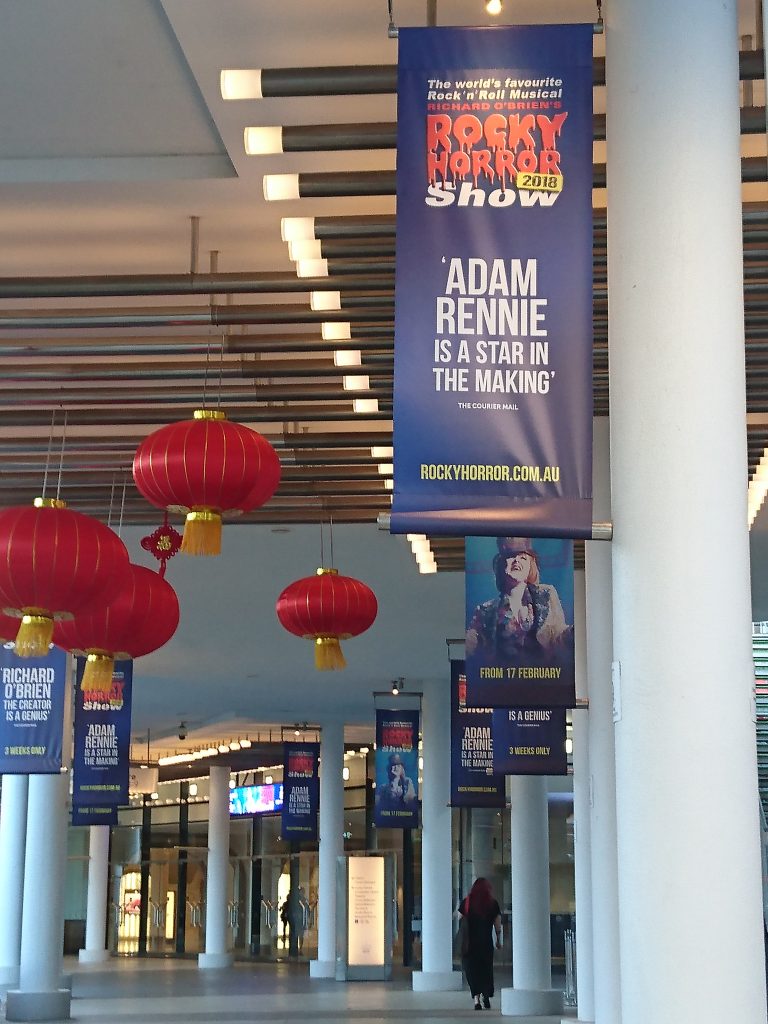 As you would expect, there was an air of anticipation in the audience for opening night for the Rocky Horror Show here in Perth. Thing thing is… with this iconic show and its massive cult following, it wouldn’t matter what night it was, that level of anticipation, that air of excitement is always going to be there to a large extent. Regardless of whether you are a long standing cult follower or popping your Rocky cherry for the first time, it’s hard not to be swept up in the atmosphere.

I believe it’s that air of anticipation that feeds the cast, transforming their already flawless performance into something more and I truly believe our new Frank N Furter came into his own (& all over the stage) and completely owned it as a result. So much so, that I wonder if those promo posters should now have an amendment. Adam Rennie is a star. No longer in the making. I’ve gone from luke warm to 69 shades of delight. I know you will too.

This isn’t a one man show though. The Australian production has a stellar cast. Adam Rennie in the role of Frank N Furter, Kristian Lavercombe who astounded audiences in the 2014/15 tour as Riff Raff, musical theatre favourites Amanda Harrison as Magenta, Nadia Komazec as Columbia and Brendan Irving as Rocky. Playing the roles of Brad and Janet, the naïve young couple caught up in a situation they don’t understand, are Rob Mallett and Michelle Smitheram. The ensemble cast includes Geoffrey Winter, Bianca Baykara, Ross Chisari, Hollie James, Hayley Martin and Stephen McDowell.

With special guest Richard O’Brien as The Narrator.

Yes, Richard in all his lycra tights glory, deserves a stand-alone special mention. For those requiring a virgin guide to the show, Richard wrote the musical stage show which has remained in almost continuous production from when it first opened at London’s Court Theatre back on June 19, 1973. Richard also co-wrote the screenplay of the film adaptation, The Rocky Horror Picture Show released in 1975, appearing in the film as Riff Raff.

And then a step to the right…

This time round, Richard O’Brien’s Rocky Horror Show saw itself kicking off in the refurbished Festival Theatre at the Adelaide Festival Centre in December 2017, before heading to Brisbane and now Crown Theatre, Perth. Audiences and critics alike have been completely won over by Adam’s exuberant portrayal of the mad scientist but it is Richard’s take on The Narrator and his complete love for the show that had the audience, myself included, skipping to a collective beat each time Richard graced the stage.

The Rocky Horror Show is a true classic. Definitely, one of the most endearing and outrageously fun shows you will ever see. Holding a unique place in theatre history and in the hearts of its cult following. A show defying the decades and continuing to grow in popularity with millions of people all over the world having now seen (and continuing to see) the productions. Many singing and dancing in their seats along to classics like Sweet Transvestite, Dammit Janet, I Can Make You a Man, Touch-a Touch-a Touch Me, Over at The Frankenstein Place and of course, The Time Warp. 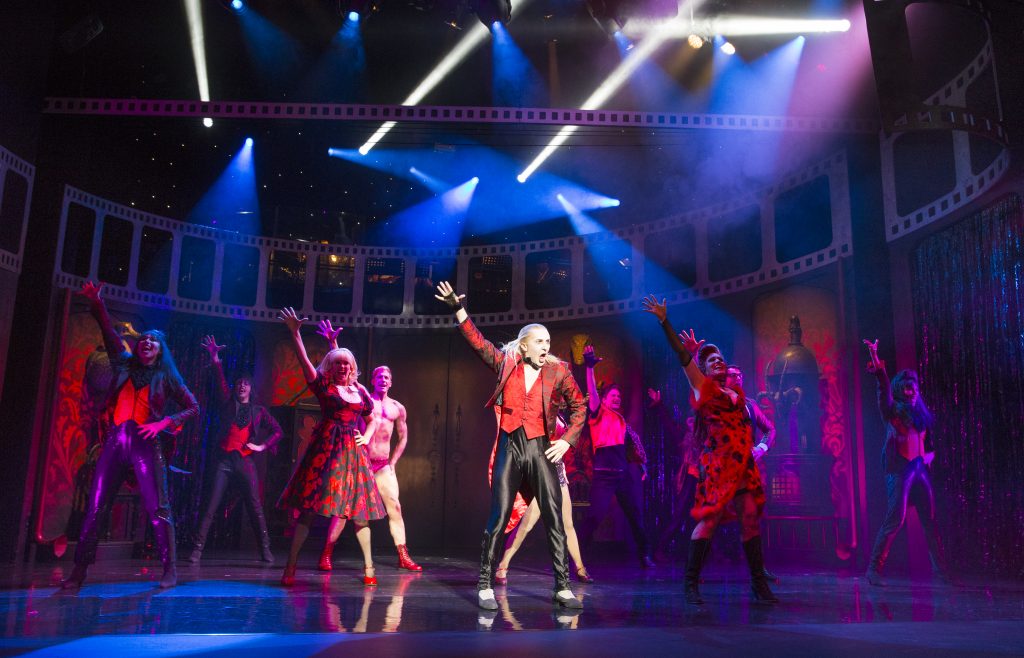 So, give yourself over to absolute pleasure, and let’s do the Time Warp again and again and again while it’s showing here in Perth. I’m planning on heading back for a lot more. It’s an absolute given. Following a small break after the Perth season, the show then heads to Melbourne. Perhaps I need to speak to Club Jetstar about timing my next Melbourne trip for the opening there. Now there’s a thought.

As expected, I’m giving this show 5 WORTH CASING STARS OUT OF 5.

For bookings and more information head to: ticketmaster.com.au

I was gifted review tickets to opening night. As you would know by now, gifted tickets or sponsored posts don’t impact my ability to tell it like it is.