Thanks to MADMAN Entertainment we have 5 in-season double passes to the THE TRIP TO SPAIN up for grabs for 5 lucky readers. There’s also an actual culinary trip to Spain on the cards as well! 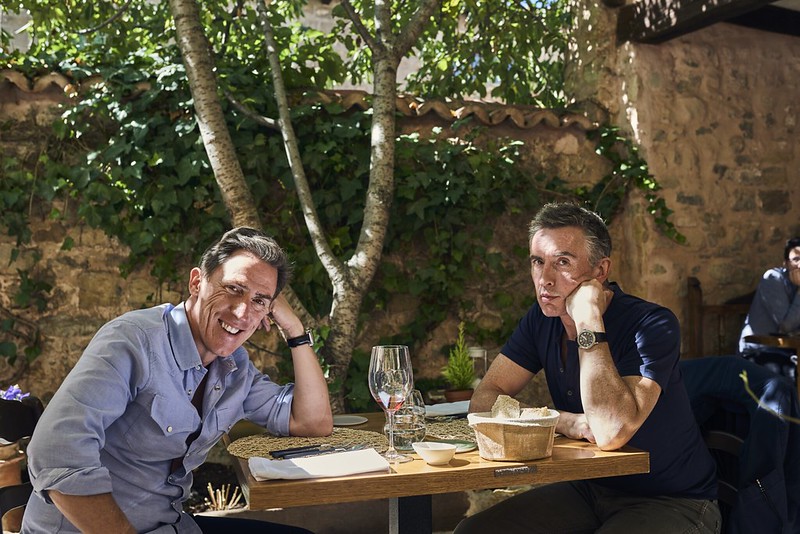 THE TRIP TO SPAIN

If you ask me it should be called ‘A Taste of Spain’ because that’s exactly what you get. A taste of the food and a taste of the countryside with a big dish of Steve and Rob’s comedic talents. Six meals in six different places on a road trip through Spain from the North Atlantic to the Mediterranean coast- visiting Cantabria, the Basque region, Aragon, Rioja, Castile La Mancha and ending in Andalucia.

Steve, now 50, is still chasing love – he wants to get back together with his ex-girlfriend Mischa, but she is with another man. Rob’s acting career is going from strength to strength, his family life is fulfilling – he has had another child since Steve last saw him.

Steve has just starred as a chef in a US TV series and is asked to do a set of restaurant reviews in Spain to publicise the show. As usual Rob will write the newspaper articles, this time using Don Quixote as inspiration. Meanwhile Steve is hoping to write a more ambitious book based on this trip and his earlier experiences in Spain. He imagines himself in the tradition of writers such as Orwell, Hemingway, and Laurie Lee. After all, Steve is now an Oscar nominated writer.

Much like the two previous films The Trip and The Trip to Italy, Rob and Steve follow a similar format with witty conversations and hilarious impersonations on their travels, as they play semi-fictionalised versions of themselves. A format that seems to work. It’s probably just me but unlike the first two courses, I felt the third course dropped pace and lost its appetite around the ¾ mark. I found myself wanting more of the food, travel and witty banter side of things and less of the ho-hum.

Thanks to MADMAN Entertainment, we have 5 double passes to The Trip to Spain up for grabs for 5 lucky people. To be in the running, check to see the film is screening near you (here) and then register your details by clicking the button below.

The Trip to Spain is in Cinemas nationally from August 3. If you do manage to see this one, pop back and let me know what you think and make sure you head to Madman Entertainment for your chance to WIN a culinary trip to Spain.