A boy band with a jaw dropping twist, WRONG DIRECTION, had their debut performance at The Ellington Jazz Club in Perth last night. A 10 pm show, part of the Fringe World line up, which due to venue constraints resulted in a lot of waiting around outside while the prior show finished.

Was this show worth the wait? Read on…

I must confess, I wasn’t entirely sure what to expect with this one. I’m not a fan of the modern day boy band and their replicated so called winning formula. Much to the eye rolling and disgust of my three daughters, I’ve been known to call One Direction… One Nation. So a comedy cabaret that takes a comic aim at boy bands kind of peaked my Fringe World interest.

I’m not sure if it was the lateness to a rather long day but I kind of thought I might have taken a wrong direction in signing up to review this show. The fact that hubby had arrived home from a month at sea and I chose to drag him along when we could have been at home literally ‘de-briefing’. There’s also the fact that the venue is an intimate one room affair. This means it doesn’t have the facilities for you to sit and have a long leisurely drink or two before the show, unless you’ve actually purchased tickets to the show before.

At 10pm on a Sunday evening, lining up in Northbridge, I honestly wasn’t feeling this one.

Thankfully the long, much needed, pre show drink did eventually come…. bring on The Ellington’s special Dark & Stormy for just $10 and the show starting almost 20 minutes late. It gave me a chance to finally catch up with hubby, while enjoying more than a bit of eye candy talent while the band set up. 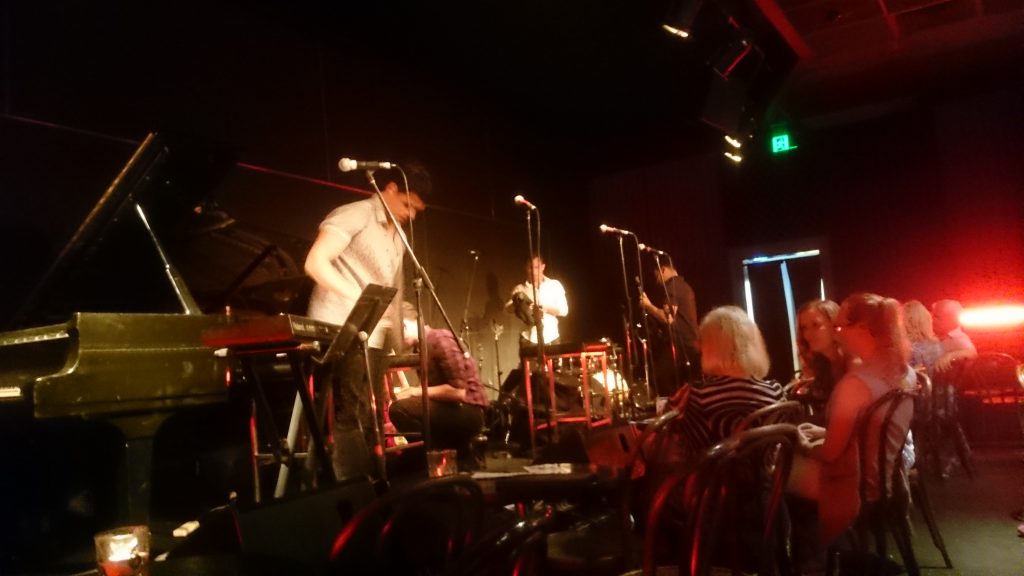 Then the show started with a bang and I was finally feeling it, as were most of the audience going on the shocked facial expressions and the uncontrollable laughter factor around the room.

Rather than singing about girls, Wrong Direction sing some of the most jaw dropping, politically incorrect songs you will ever hear. This hilarious production will have you rolling around on the floor laughing and needs to come with a warning. Not for the easily offended or faint hearted, unless you’re related to the band.

NOT a show for a first date or one to bring your mother to. Especially if you are dating one of the boy band members and they’ve written a song about your sex life taking a ride on dark side. True story… I think.

Was the show worth casing?

Even with the late start and the slight feedback issues at the start of the show, which the band seemed to adopt as part of the performance, I’m giving this show 4 out 5 worth casing comedy cabaret stars. The four WAAPA trained lead performers, all talented in their own right, know their shtick and how to work an audience.

I’m not convinced this was the right venue for this particular show. I’d be keen to see Wrong Direction take on a slightly better direction with a bigger stage, allowing more room for their boy band maneuvers and antics. Although you could argue the limited space to move, only added to the performance in this case. I would definitely be keen to hear more songs added to their set, pushing the show out to a full hour.

WRONG DIRECTION | FRINGE WORLD PERTH
Tuesday 31 Jan | Start Time: 8:00pm | Tickets From: $16
Quick tip… if you are planning on seeing the show, purchase your tickets early. Doors at The Ellington open roughly 30 minutes prior to listed show start. You may need to queue outside while waiting for the show prior to finish. For the full cringe worthy factor, I’d be inclined to bring your mother-in-law, sit front row and possibly contact Wrong Direction prior with your details and see if they can’t actually send a little inappropriate song lovin’ your way.

** I was gifted tickets to Wrong Direction** As always, gifted tickets or not, reviews, opinions and the ability to get into the groove (or not) are my own.