Making a spectacular splash at Crown Theatre Perth till January 22nd, Singin’ in the Rain is everything you could want in a musical and more! 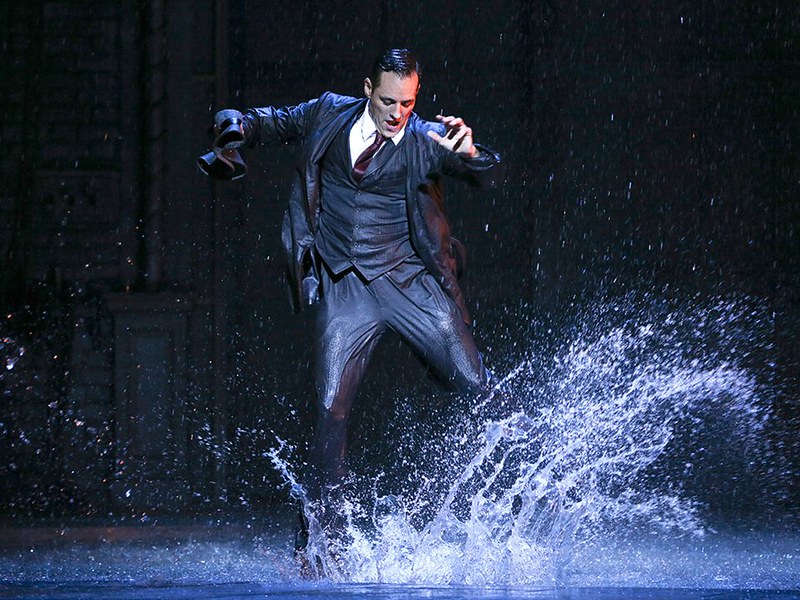 SINGIN’ IN THE RAIN

I’m going to keep my review, relatively short and sweet for this one. Mainly because I’m still in super relaxed holiday mode but also I’m currently in an internet free zone. Which basically means I need to find and climb a huge mountain, stand on one leg and pray to the social media gods while hitting publish. While I could wait until I’m back in the land of the social media living, this fab musical is only in town for a strictly limited time and it’s just too good not to share. Definitely worth casing in my books.

I was lucky enough to attend opening night on New Year’s Eve and sit front row with hubby, my plus one for the evening. In the splash zone. A zone that comes with a weather warning on your ticket and a rain poncho on your seat. There’s also some very specific instructions as to when your poncho needs to come into play and a whole lot of fun and shenanigans trying to actually get said poncho on in the dark while remaining seated.

I must confess, it’s probably one of the best ways I’ve spent New Year’s Eve and one of the most charming musicals I’ve seen since moving to Perth (8 years ago now). Which surprised both hubby and myself because we honestly didn’t think we could top last New Year’s Eve.  We also didn’t expect we could truly believe all the hype that surrounds this production.

A production that I’m sure you all know, is adapted from one of the world’s best known and loved romantic comedies. Set in Hollywoodland, it tells the story of the very first Hollywood musical, when black & white silent films first found their voice.

The title and encore song Singin’ in the Rain, was the true highlight for me. You’ll honestly find it hard not to sing along or elbow the tone deaf person next to you, who does attempt to. 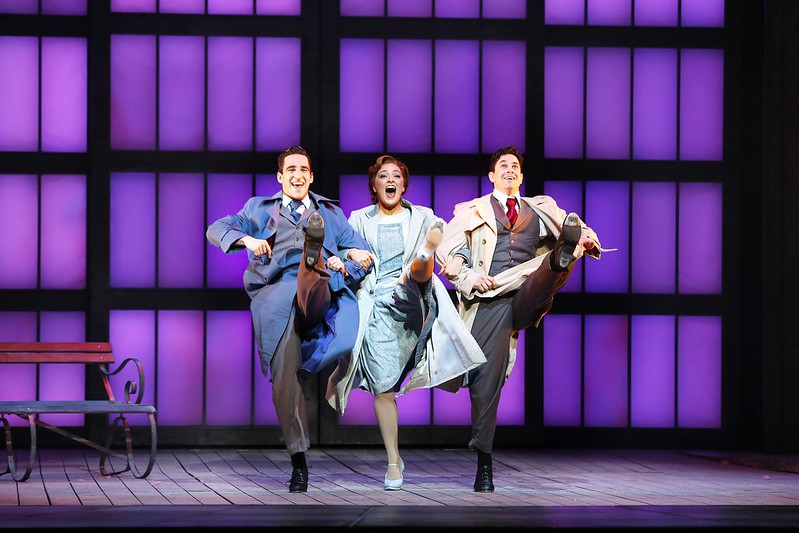 Following Adam Garcia’s departure from the show due to injury, Grant Almirall and Rohan Browne alternate as the charismatic Don Lockwood the musical’s leading man. For opening night in Perth that privilege fell to Almirall.

Jack Chambers who plays Cosmo Brown, Don Lockwood’s trusty sidekick steals the show in his comic role. Gretel Scarlett sings and dances her way into the leading man’s heart, charming the audience along the way playing the lead romantic interest Kathy Selden, a young and talented starlet trying to make it in Hollywoodland. 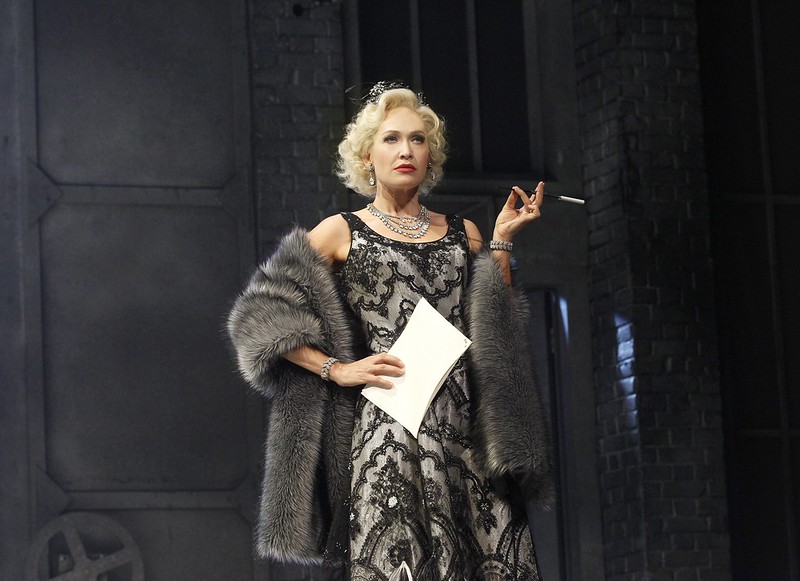 While there are three standout performers leading this musical, I feel a fourth performer deserves the same recognition. Erika Heynatz, is for me, one of the stand out comic leads for this show. Her comic timing is impeccable.

While Erika’s character Lina Lamont is without a doubt the most annoying character on stage for this show, there is still a certain cringe worthy charm to her impressive performance and her character.

From the get go, I was completely captivated by the costumes, the choreography and the set design itself. Initially, it goes from several shades of grey to something far more colourful. 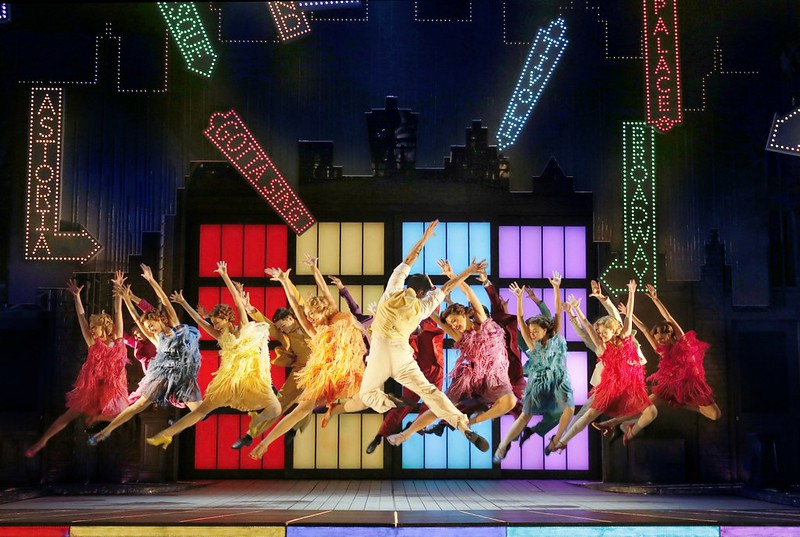 There’s something about that era (1920s) that exudes opulence and old Hollywood glamour. An era of gentlemen, fine suits and making an effort, even when completely drenched and literally singing in the rain. Why even the clean-up crew at intermission, those tasked with removing over 12 thousand litres of water from the stage, were dressed the part.

Just as my front row tickets came with a weather warning, I feel the need to provide a few tips for this particular production… call them warnings or think of them as learning from my  experience.

SINGIN’ IN THE RAIN TIPS:

I honestly think, if you don’t mind getting a little (or a lot) wet, it is worth trying to obtain tickets in the splash zone (first three rows). Although, I’m heading back soon to sit a little further afield. I’m guessing elevated seats will actually offer a different perspective. Not only on the splash zone shenanigans which had everyone talking at intermission but also the choreography, particularly the tap dancing.

If you are seated in the splash zone and have prior warning (unlike me), don’t bother with having your curly, frizzy hair straightened. Wear waterproof makeup/mascara and avoid suede shoes. YES… I was kicking my heels up in suede heels in non-waterproof mascara on NYE. NO… the rain poncho doesn’t cover you to the floor and yes if you’re not careful, you can still end up wet. We are talking about thousands of litres of water hitting the stage and some of the splash zone!

Under no circumstances should you make eye contact with the performers in the encore performance like I did. I strongly suspect it only eggs them on and makes you more of a wet weather target.

If your bag allows it, pack a small washer, towel or even a sturdier rain poncho.

If your budget allows, I would splash out and take advantage of one of the packages Crown have on offer right now. Like the Hollywood Package that includes an Adult A reserve ticket plus a souvenir program and your choice of house sparkling, white wine, red wine, beer or a soft drink. At just $95.95, a great saving of up to $54 per ticket.

You could also make a real night of it. Start out at one of the fab restaurants at Crown (I suggest Nobu or Rockpool) and finish with a night at one of their three hotels… Crown Tower, Crown Metropol or Crown Promenade.

What can I say… it was 5 out of 5 worth casing stars for me, for this sensational show.  A show that left me smiling from ear to ear and looking like a drowned rat. A show that I wanted to revisit, even before I’d had time to remove my poorly applied rain poncho and dry myself off. Who wants to join me?

Singin’ in the Rain 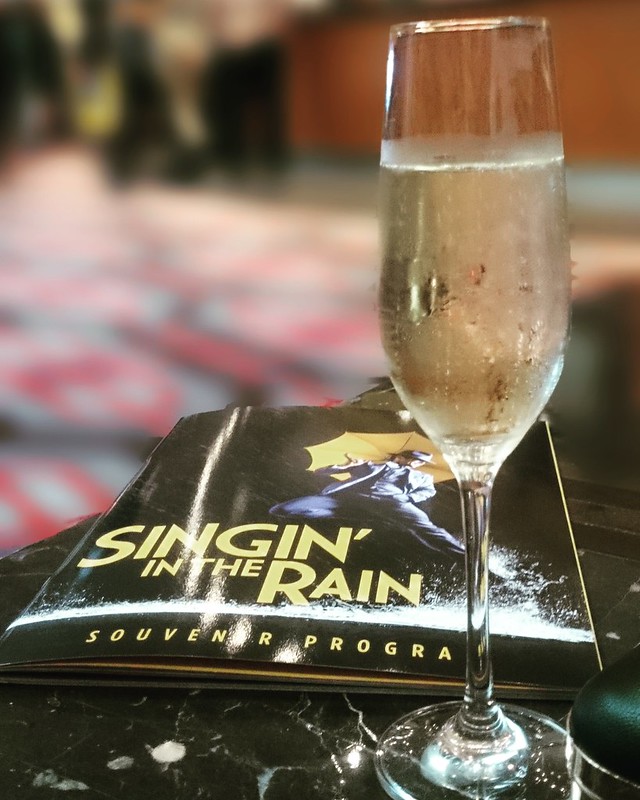 Please note: I was gifted tickets to opening night. As is always the case, opinions are honest and my own and not influenced in any way by gifted tickets, the glass of complimentary bubbly consumed prior to watching the production or the fact it was New Year’s Eve.