I’m feeling rather musical today, following opening night for Little Shop of Horrors at His Majesty’s Theatre in Perth on Saturday evening. Although I must confess, the following day, I did a little home office makeover that required a trip to my local nursery, for a new pot plant and I just couldn’t bring myself to look a single plant in the eye, let alone bring one home with me.

Laced with somewhat dark humour and a catchy song or three, Little Shop of Horrors is one of the longest-running off Broadway shows of all time. Inspired by the 1960 Roger Corman film of the same name, this rock musical version of Little Shop of Horrors premiered off Broadway in 1982 before enjoying a successful run on Broadway and in London’s West End, eventually inspiring the 1986 film version by veteran puppeteer Frank Oz that starred Rick Moranis and Steve Martin. Popular songs from the musical include ‘Feed Me’, ‘Suddenly Seymour’ and ‘Somewhere That’s Green’.

The cult musical comedy has been making big waves and earning rave reviews on its tour across the country, with the musical ending its journey with a limited season here in Perth. This was my first experience with Little Shop of Horrors. Hubby on the other hand, my plus one for the evening, joined the Little Shop of Horrors cult in the early 80s and seemed to know like most of the audience what was coming next.

The humorous yet rather bleak tone was set early on in the piece when iconic SBS newsreader Lee Lin Chin unexpectedly hit the black and white screen for a newscast, where we catch a glimpse of the disaster about to unfold on earth at the hands of alien plant life.

It is at this point that we head back to the beginning. Mr Mushnik’s down and out florist shop on ‘skid row’ where floral assistant Seymour Krelborn stumbles across a new plant species, naming it ‘Audrey II’ after the co-worker he has a mad crush on. 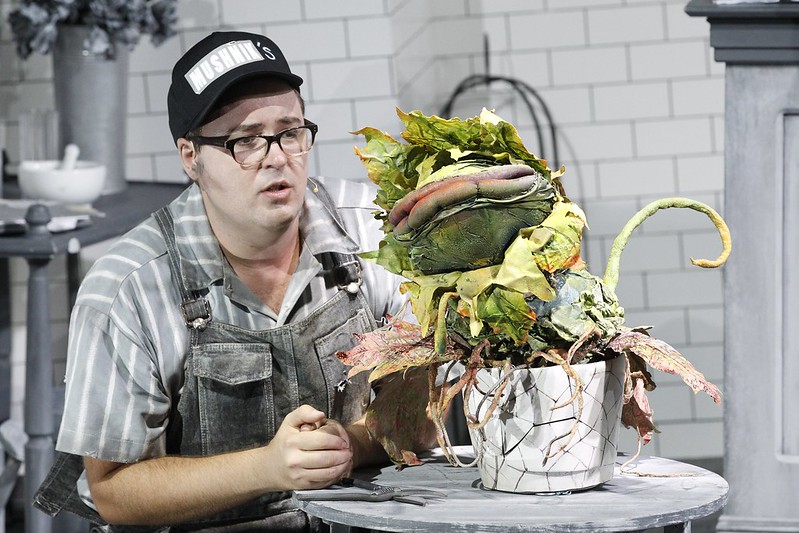 Much like the black and white newscast, the simplistic set itself is initially several shades of grey. Colour comes slightly into play when we are introduced to Audrey II. A pot plant that starts out rather small but its point of difference makes a big impact, giving Seymour and the florist shop their apparent ticket to fame and fortune.

The exponential growth of the alien plant eventually takes on an enormous, even more colourful form covering the entire florist shop set in the second half of the show. From here, the musical much like the growth of the plant goes into a colourful overdrive, with the plant engulfing the set and disturbingly most of the cast along with it. 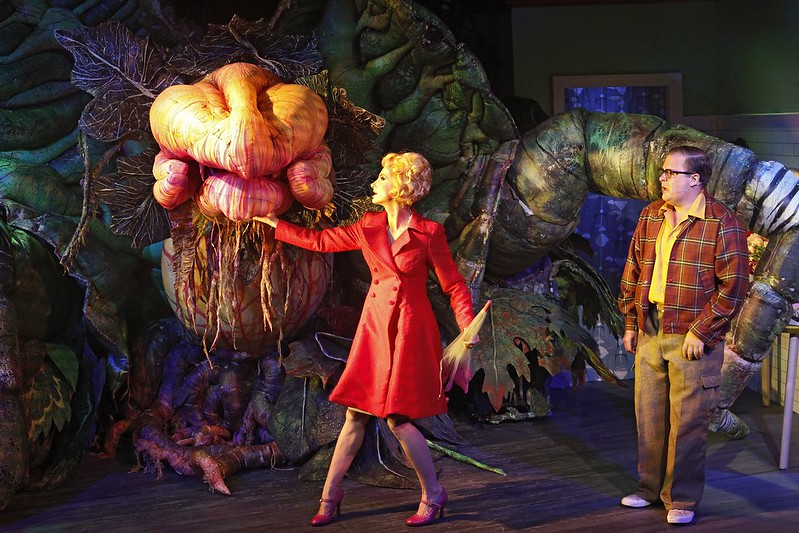 The performances and the impressive puppeteering are captivating and faultless. Even if you don’t have a history with the musical, like myself, this is definitely a show worth seeing before it closes in Perth. While I certainly can’t see myself joining the LSH cult any time soon, I would definitely put this production in my top 5 for musicals that I’ve seen in Perth in the last 7-ish years.

If you are familiar with the original show and are heading to see the musical, I’d be keen to hear how you found it. Even though it has been far too many years since hubby has seen the film, he enjoyed the humorous take on the dentist. He claims it made a nice change from the maniacal dentist played by Steve Martin in the 1984 cult classic film and there was some talk about the ending being a little different to what he recalls of the film.

As I haven’t seen the film, I’m either going to have to take his word for it or track down the film and compare for myself. I’m a huge Steve Martin fan, so I’m guessing movie night at my house might be on the agenda this coming weekend. Thanks to Instagram stories, you might even say… you’re all invited (completely kidding here, I don’t do IG stories).

Right now, I’m off to finally pick out a plant for my new home office. One that hopefully has a limited growth rate.

** I was gifted tickets for opening night. As is the case with all my reviews here on AMC (sponsored, gifted, invited or gatecrashed), opinions, thoughts, fear of plants and selection of my plus one are my own.

For more information on the musical and to book tickets head to www.littleshoptour.com.au