Disney On Ice presents Magical Ice Festival, which kicked off in Perth this week to the delight of Disney fans young and old.  I should know, I’m most certainly one of them. 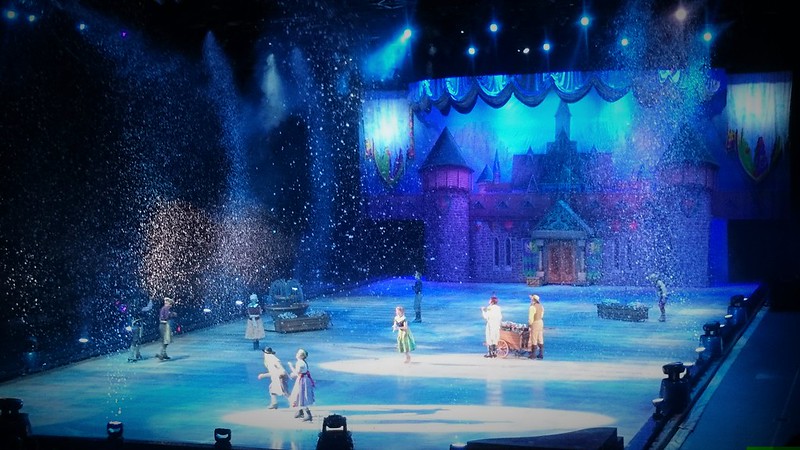 I must confess, it’s been over 11 years since we last attended a Disney on Ice performance as a family. It was at the Wollongong Entertainment Centre in 2004, for Disney Princess Classics. What a show. We were seated in the nose bleed section because tickets back then weren’t as affordable as they are now. I admit we may have needed better vision or binoculars to really appreciate the skating technique in those seats but what was clear from the outset, Disney know how to do spectacular that resonates with the masses and my family love Disney on Ice.

Even though my girls are now so much older and this is typically a show aimed at a much younger audience, they were all surprisingly super keen to attend. Their keenness didn’t equate to dressing up or singing along, so I may look to adopt a much younger family if I decide to head back before it closes on Monday. And yes… I’m considering heading back. Dressing up even, because Love is an Open Door and as far as I’m concerned… a Disney on Ice spectacular.

Just going on audience perception, taking into account the jumping up and down in their seats factor, there were two standouts for this performance.

The first took us Under the Sea with The Little Mermaid, a visually spectacular performance, where it was hard not to be captivated by Sebastian the Crab’s energetic performance or be swept away with Ariel’s impressive aerial acrobatics, high in the air when the mermaid found her legs. 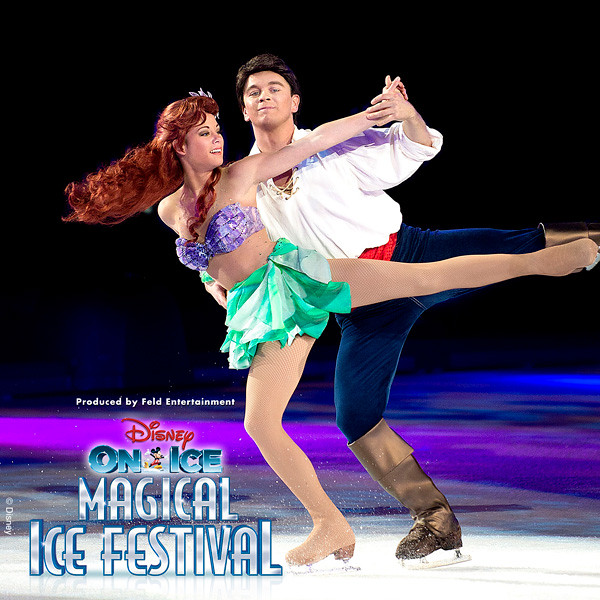 The second standout will come as no surprise given half the audience were dressed the part for Frozen. It kind of left me wondering why Disney went with the current line-up and didn’t just bend to popular demand and call it Disney on Frozen Ice.

Two complete hours dedicated to Frozen would certainly appeal to the younger audience members but I think the current line-up actually appeals to a much wider demographic. Something for all generations young and old. Enough Frozen to satisfy the masses but not too much to tip the poor parents, that have been force fed it of late, over the ‘let it go’ edge.

As it was, the show line-up included four Disney films. The Little Mermaid, Beauty and the Beast, Tangled and Frozen. All condensed into bigger than bite sized dishes, providing audiences with an almost, all you can feast on 2-hour buffet. And what a feast it was, ending with a super sized Frozen dessert.

For me, who is rather old school, it was Beauty and the Beast, followed very closely by (don’t hold it against me) the Mickey Mouse Club component of the production. Which is basically how the show started. Four iconic Disney characters (Mickey Mouse, Minnie Mouse, Goofy and Donald Duck) our hosts for this magical Disney journey with a talented troupe of back up ice skaters. 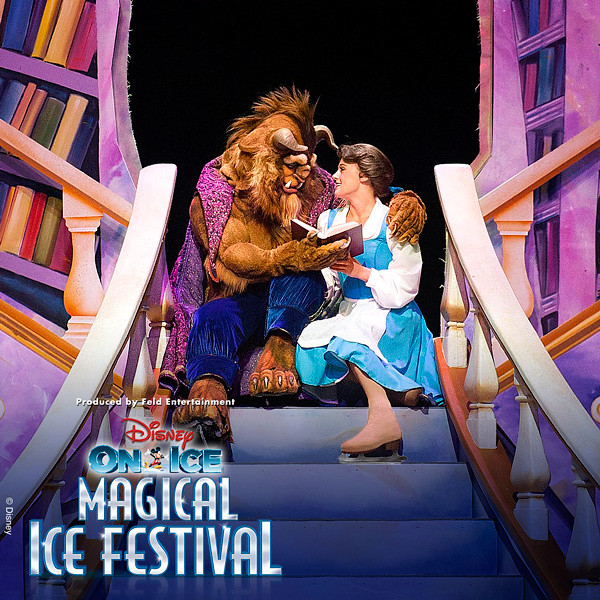 Speaking of the skating element to the show. Completely mesmerising. There were no falls or mishaps on the ice on this occasion and you weren’t really left with the expectation that there might be, like one experiences when watching ice skating at the Olympics. There were a couple of really tiny moments that had me second guessing if a skater had just saved themselves from a small fall or if it was in fact part of the show and the performance. For the most part though, the performances were seamless, captivating and a real testament to the performers and their world-class skating abilities.

Which brings me to Tangled the Disney film that brings the story of Rapunzel to life. I’m not entirely convinced there was enough, if any, letting of the hair down. Don’t get me wrong, I was still enchanted by the performances, I just didn’t think the condensed Disney on Ice version kept true enough to the story for this particular one. Something that possibly boils down to trying to fit so much Disney magic into so little time.

LET IT GO… because love is an open door 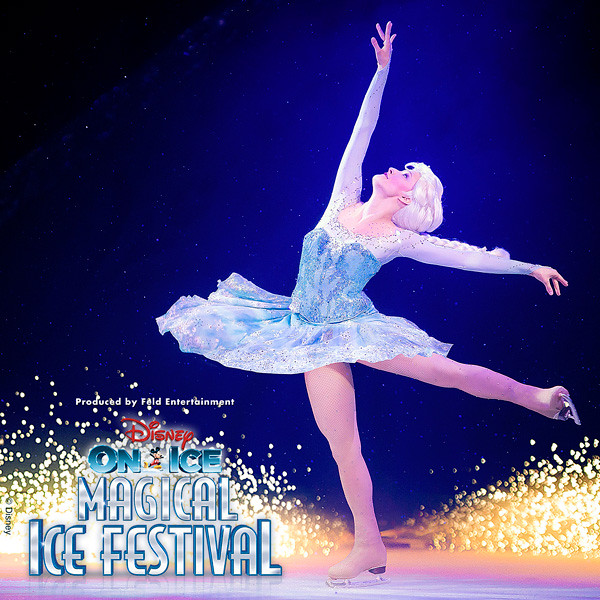 I must confess, I somehow missed the entire ‘Let it Go’ Frozen movement. My girls are a tad older, get to make their own decisions when it comes to movies and generally head off to the cinema with friends. So I haven’t actually seen the movie or listened to the song in its entirety. Which means, I was probably the only adult at Perth Arena on Saturday morning that didn’t actually know all the words to ‘Let it Go’ or cringe in anticipation of that particular song.

As the realistically looking fake snow started to fall, I may have started singing “let it snow, let it snow” and found myself wishing I was part of the front row action. With the little ones and their parents, not too far behind, nudging closer to the action by the snowdrop.

Oddly enough, I belted out ‘Love is an open door’ for a good 30 seconds before my girls gave me the ‘act your age, not your shoe size… you’re about to be disowned’ look. Of course their looks of disapproval only fueled the fire. There’s something about that song that makes me want to hop in my car with a bunch of bloggers and start lip syncing my heart out.  {To all my blogger friends… I’m keen if you’re keen}

My girls, although older thoroughly enjoyed the entire show. While they weren’t jumping up and down in their seats or singing along, like myself & the under 10s in the audience, they were certainly singing, dancing and cheering on the inside.

IN REVIEW (hints, tips and more):

Allow extra time for parking and cloaking your prams (if you decide to bring them).

Don’t be alarmed by the huge lines outside, once they get flowing, they tend to move pretty quickly.

Once inside you’ll need money and time to peruse the merchandise area. It’s extensive, slightly expensive and hard to say no to.

It’s a 2 hour show with a brief intermission. Eat and drink before you head in and then head somewhere nice for lunch afterwards (if seeing the morning show), rather than fork out a fortune for snacks at the venue. At the Perth venue, bottles of water are $5 and I believe that’s one thing you can’t actually take from home and through the security check. Correct me if I’m wrong, I’m also led to believe you are allowed to take your own snacks (within reason).

Keep in mind this is ultimately a performance targeted and adored by small children. So you may need to put up with having your seat kicked constantly and being hit in the head with wands and other merchandise purchased before the show. Some of this merchandise flashes brightly like a burning in the back of your eye strobe in the dark. If you’re prone to headaches/migraines it can be rather in your face.

Pick your plus ones wisely! This show is for all ages; so don’t feel you need to borrow a friend’s small child to attend if you don’t have one of your own. Your experience is probably going to be on a completely different level and a lot more fun though, if you do have a little Disney fan with you, especially if you are sitting front row. So many little ones couldn’t contain themselves to their seats throughout the show and it was an absolute delight to watch.

If you take teens with you (like me) and feel like belting out a song or jumping up and down in your seat, be prepared to be disowned. If you bring your Disney hoe hum hubby along for the ride, be prepared for them to be on their phones catching up on the sport occasionally (not mine of course but I did notice a few in the crowd).

Disney On Ice presents Magical Ice Festival. A jam-packed show overflowing with the magic factor that we’ve come to know and expect from Disney on Ice!

Currently in Perth until Monday 6 June before heading to:

Thanks to Disney On Ice presents Magical Ice Festival I have a fabulous prize pack up for grabs for our Melbourne readers:

To be in the running to WIN this fab prize pack, please comment below letting me know who your favourite Disney character is and why!

Tickets available through Ticketek. For more information and to view a clip from the show visit www.DisneyOnIce.com.au.

I was gifted tickets for my family to see the show. All opinions, crazy jumping up and down in my seat and really bad singing during the show (that may or may not have annoyed my teen daughters) are as always 100% my own.