For almost four years now, I’ve been partaking in a personal challenge of sorts. I basically attempt one new thing a week. For semi obvious reasons, I call it my… One New Thing a Week Challenge. Not necessarily a bucket list, more an active effort to get me out of a bit of a rut I fell in while playing house, where I lost a sense of my old self when taking on my role of wife and mother.

Some weeks my one new thing is something extraordinary like starting this blog or designing a handbag. Other weeks it’s super easy like trying a new food, with a lot more varying degrees of difficulty and adventure in between.

The challenge very rarely makes it to the blog. That may change. Even if it does, I can guarantee you will never see me jumping out of a perfectly good plane. It’s not my style.

Last week my one new thing was popping my Karvan Coffee Eggspresso cherry at Sugar and Nice following that viral video. This week it was attending my first ever Oz Comic-Con event. Although, I’m not sure event is the right word here? Convention perhaps? Eye opener? Let’s stick with event for now.

I must confess I’m not convinced this Oz Comic-Con event is entirely my thing. I felt slightly out of my element and a lot out of the loop but I am somewhat captivated by the Cosplay element to the event. Completely fascinated. Thoroughly hooked even.

I spent a large percentage of the day at Oz Comic-Con ‘casing’ (it just sounds better than stalking) the Cosplayers. In particular Lady Jaded (pictured below with my daughter), who only gave birth to her first child 7 weeks ago and the charming Variable. Both women highly regarded within the Australian Cosplay industry. 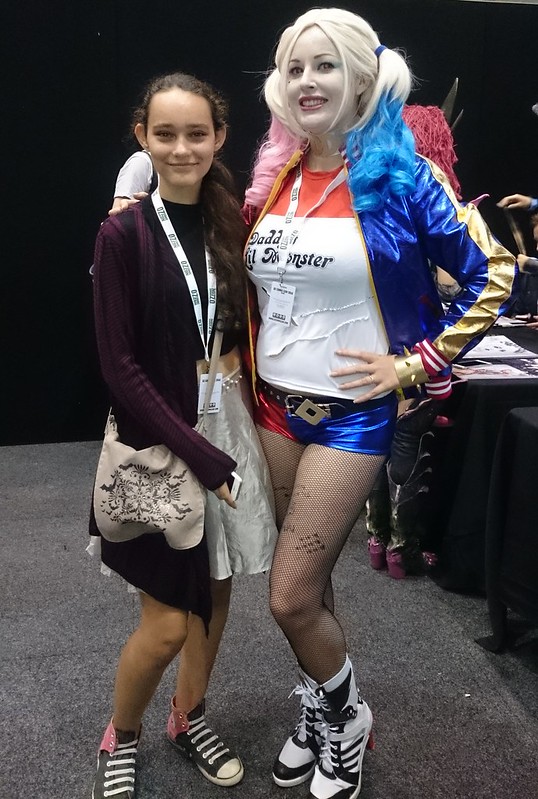 I must confess I had a number of preconceived notions when it came to Cosplay. For starters, I’d assumed Cosplay consisted of a bunch of super fans, forking out far too many $$ for mass produced costumes of their favourite pop culture characters and then throwing a convention to parade around in them. I couldn’t have been more wrong. Hangs my not geeky enough head in Cosplay shame.

Yes there are some that purchase the mass produced outfits but there is also a large and dedicated following that create their outfits from scratch. The amount of time and energy that goes into making these costumes is mind blowing. 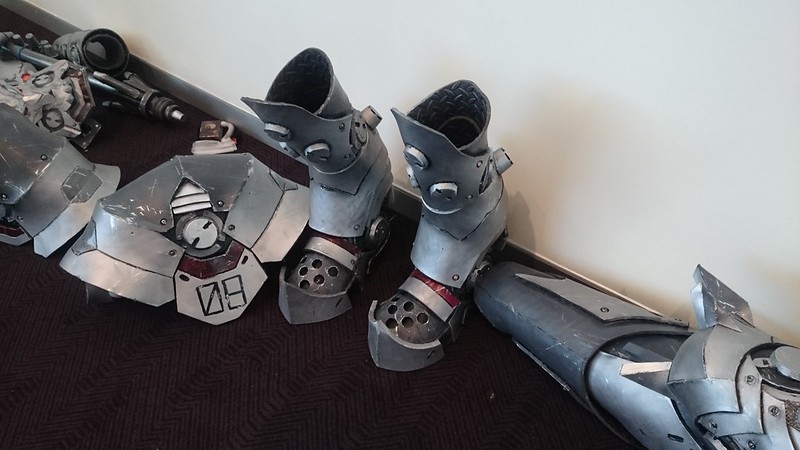 The costumes themselves are more than impressive. The intricate detail and the innovative design approach is something to be admired. You really have to get up close and personal with the creations to appreciate just how serious the business of Cosplay is when you take it seriously.

Cosplay (コスプレ kosupure?), a contraction of the words costume play, is a performance art in which participants called cosplayers wear costumes and fashion accessories to represent a specific character.[1] Cosplayers often interact to create a subculture and a broader use of the term “cosplay” applies to any costumed role-playing in venues apart from the stage. Any entity that lends itself to dramatic interpretation may be taken up as a subject and it is not unusual to see genders switched. Favorite sources include manga and anime, comic books and cartoons, video games, and live-action films and television series. From Wikipedia, the free encyclopedia

My three teen girls that are Oz Comic-Con veterans (for their age) and right into Cosplay, insist I still don’t understand the culture completely but at my age, given my lack of television and pop culture watching over the years, it’s a start.

I’ve been half joking with my girls following the event that I plan on returning next year with a Mystery Case character and costume. Once again they insist, I’m getting it all wrong. So very wrong. And yes I probably am but I wouldn’t mind having a huge shot at proving them wrong. Only I’m not sure how to approach it or what exactly it will look like.

I think the easiest way (if there is one) would be to create a comic book character, only an online one, as a series for the blog. The adventures of Mystery Case springs to mind but seriously… I’m time poor, not that great at illustrating, creatively challenged and if that wasn’t enough… way to add just another demographic to the blog that is already jammed packed with too many demographics as it is.

I’m not sure you, the blog or the rest of the world are ready for that side of me. My girls would insist no one is.

There’s also the fact that if it hadn’t been for my talented aunt I would have failed sewing at school. I had to basically outsource the mini skirt I signed on to make in year 10 for my end of year assessment. Thank goodness I did because it would have fallen apart at the seems when I was forced to model it at the end of year showcase. Making even more of a showcase of myself in the process.

I should add the skirt didn’t start out to be a mini skirt, just my bad attempt at hemming and then trying to fix said hemming by cutting away the evidence and starting again meant it was several inches shorter than first planned. Clearly, I’m not a seamstress. I can sew a button on, if I’m desperate but I wouldn’t count on that button having any real staying power.

I strongly believe, after spending time with the serious side of Cosplay this weekend, that being able to create a Cosplay costume from scratch, even the less complicated looking costumes, requires a tremendous amount of skills I just don’t own. Not that that has ever stopped me before?

Catching up with Lady Jaded and Variable at Oz Comic-Con to chat about the Australian Cosplay culture this weekend has certainly sown the Cosplay seed and I’m now full of crazy ideas of what my costume might look like.  Lady Jaded and Variables own Cosplay endeavours provide not only inspiration but also highlight their passion for the culture which to me is almost bordering on obsession.

Lady Jaded in particular, naming her child after what I believe is one of her favourite characters. There was also her Star Wars themed wedding where for starters, Lady Jaded’s father dressed as Darth Vader to walk her down the aisle.  I’m not sure I’m ready to take things that far but I wouldn’t mind dipping my little toe in the Cosplay water and seeing where it might take me.

For a newbie who isn’t exactly up to date with or in the thick of the culture, I had a great time at Oz Comic-Con. Cosplay was certainly what kept me most entertained throughout the day. 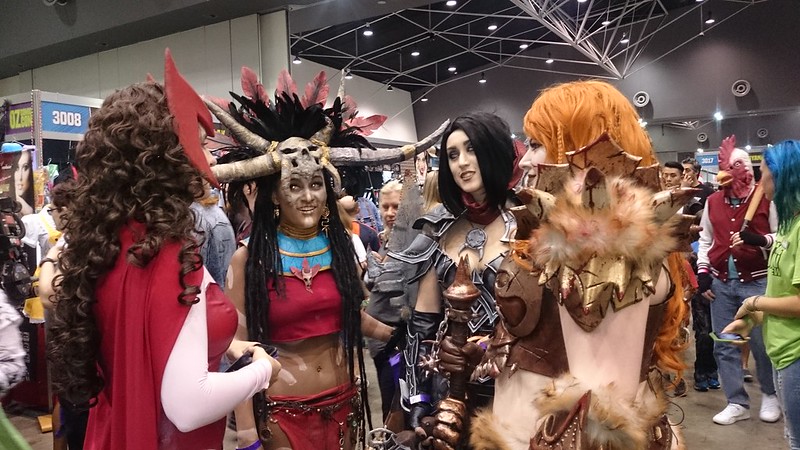 Oz Comic-Con TIPS from a newbie

I’m not a huge fan of lining up, so I would suggest if you are planning on attending one of the shows across the country, you purchase tickets online beforehand.

The lines for purchasing tickets on the day were massive for most of the day and into the early afternoon. In terms of the Perth event, there were also large lines for food and drinks within the complex but if you took a break and a five minute walk outside, it wasn’t so busy.

In Perth, packing a small picnic and taking advantage of the sunny grassed area out the front (or back depending on which way you look at it) is also a great idea. You’ll avoid the long lines and have more money to spend on merchandise.

My ONE Oz Comic-Con gripe

I’m not sure if it was an end of day thing or I was just super tired and easily irritated by that point but my only real let down moment at the event had everything to do with the host for the Cosplay Active Awards.  I honestly found her hosting style a variation of lame, super lame and cringe worthy. If it wasn’t for the captivating Cosplay costumes, I wouldn’t have stuck around.

Her time filler…. ‘a guy dropped my bag of gummy bears on the floor rendering them uneatable and made me cry’ story together with the high five-ing trip around the audience had me wanting to tackle her for the mike and put an end to the cringe fest.

I’d say you had to be there for the gummy bear story but gosh you really didn’t. Perhaps if she’d actually eaten the gummy bears, things might have gone a little better? Yes, I know… ‘she’s the cat’s mother’ and I really should have spent less time cringing at her and more time finding out her actual name.

Having watched the two judges (Lady Jaded & Variable pictured below) present earlier in the day, I think either of them or even the host for their panel (also pictured below) would have done a much better job. 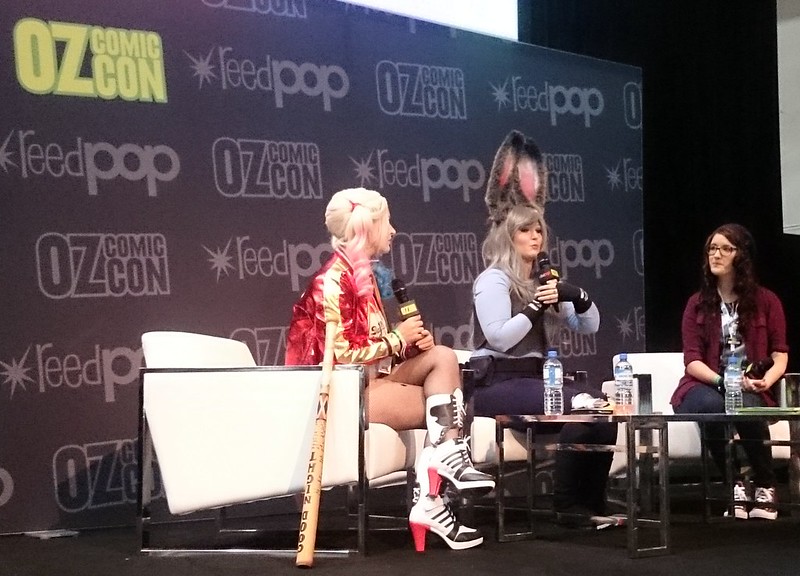 If you were also there on the Saturday afternoon for the Cosplay Active Awards, I would love to hear your take on the hosting side of things, as well as the fab Cosplayers and if you had a stand out favourite? I had a few that I spotted throughout the day, some of which didn’t actually make it on stage, which surprised me. I will have to case the ins and outs of the Cosplay Active registration for next year.

Overall, my three girls, who go every year, have apparently seen a better guest line-up in previous years but they still had a fantastic time. My eldest actually headed back for more on the Sunday. If I wasn’t already heading to a charity event, I would have been tempted to join her.

In an effort to distract me from my Mystery Case Cosplay character ambitions, my girls have each thrown a few more appropriate Cosplay ideas my way for next year. Both in terms of an individual effort (where they hopefully won’t disown me in the first five minutes) and a more acceptable (to them) united family approach where I blend in. I would love to share a snippet, if only to get help deciphering what exactly they are on about but apparently I need to keep it under wraps for now.

More Oz Comic-Con photographic highlights will hit the blog for Worth Casing Wednesday. Who knows, I may even be wordless this week.

Right… so who thinks I should create a Mystery Case Cosplay character/costume and if so what should she look like? Who thinks I’m having a mid-life crisis? Who thinks I may just be missing my hubby who is currently at sea and finding time consuming and elaborate ways to distract myself? Who thinks I completely nailed my One New Thing this week?

Shutting up now… and handing the mike to you!