Tuesday November 17th marks the 5th annual World Prematurity Day. Which has me revisiting a post and a time in my life that touches on my youngest daughter’s premature birth.

While I consider ourselves rather lucky in terms of our healthy daughter and our very brief time in neonatal care, it was still a rather stressful time.

A time that I really could have done with some support and understanding outside the medical profession and our family, who were also struggling. Support that is now available through the Life’s Little Treasures Foundation, Australia’s leading charity dedicated to providing information, support and understanding to the parents of babies born premature or sick. They even have a 24 hour support hotline.

On Friday at the Kids Business Bloggers Brunch in Melbourne, I was lucky enough to catch up with Shusannah Morris, Co-Founder of Life’s Little Treasures Foundation and Australian of the year nominee. I was impressed with Shusannah’s drive and passion together with her commitment to supporting families of premature and sick babies throughout Australia. Life’s Little Treasures Foundation is really doing some amazing work right across the country. Not only in supporting families but raising awareness.

I was shocked to learn that there are an average of 76 premature births per day in Australia. Most of which spend months in neonatal care. I know how disruptive and stressful a month or so can be, especially when your child is struggling. There’s also the flow on effect it has to those around you. I couldn’t imagine five months or more, as was the case for Shusannah and her daughter born premature. Having a support network during this time is an absolute godsend.

World Prematurity Day is a chance for everyone to learn more about the causes and implications of premature birth and Life’s Little Treasures foundation has teamed up with Medala this year to continue doing just that.

Setting the scene and trying to remember back to a rather dark time in my life. I was almost 30 weeks pregnant. I’d been in and out (mostly in) hospital from the 20 week mark with what we thought was pre-eclampsia but turned out to be HELLP syndrome, turning more yellow by the second with my liver not wanting to play the game, or any game.

It was a hugely stressful time, we had just sold our house with removalists and hand over taking place in a few days time. With all my time in hospital, we hadn’t really had a chance to start looking, let alone secure our next property.

The week prior, I’d been moved to a private hospital four hours away that was close to the John Hunter hospital in Newcastle (NSW) with a neonatal ward in case we needed it. Sydney (less than two hours away) also had neonatal but they were full to overflowing and this wasn’t considered an option at the time.

We had family an hour or so away from Newcastle and my two daughters aged 1 & 2 were staying briefly with my mother while hubby continued to pack up our house.

Things weren’t going well on all fronts.  The removalists didn’t show (although hubby kept this from me at the time), my twice daily blood tests were getting worse and my girls were missing me and possibly causing stress for my mother and her OCD partner at the time. Miss 2 also had an accident while running in the house and broke her collar bone which just added to the stress.

I honestly felt like I was on a runaway train with no chance of getting off.

I distinctly recall my doctor arriving for his usual afternoon rounds, with the nurse not too far behind him but rather oddly for him, on this occasion he took a seat. He had my latest blood test results in his hand and it wasn’t good.

I’d been through a similar thing with the last pregnancy and managed to get to the 35 week mark, so I honestly wasn’t prepared at not even 30 weeks for what came next….. ‘we need to transfer you NOW, it’s time to have your baby’. Coma and life expectancy for both myself and the baby were also mentioned at some point but I wasn’t really hearing it. I was in denial. Trying to talk my way out of this nightmare. Wanting desperately to gain back some control. Knowing my husband was several hours away and not contactable.

I’m pretty sure I went through all the stages of grief in three minutes, I begged, pleaded, got annoyed, wasn’t having a bar of it and somewhere in between the tears, fears and tantrums I finally acknowledged the gravity of the situation and accepted I really had no choice. Strange looking back now, that I thought at the time I had accepted what was to come and had some control over the situation.

An ambulance was called to transfer me to intensive care at the public hospital and just as it arrived, so did my mother and two babies. Not exactly how you want your little ones to see you. I remember writing my will in the back of the ambulance and a brief note to my hubby about what not to do with the children if I wasn’t around, thinking that it was a given that if it was written, I wouldn’t need it.

Unfortunately, I’d left strict instructions with my husband that morning to finish packing the house and get settlement finalised before returning.  I even made a joke that if my over dramatic family called asking for him to return to not listen.  With no mobile phone and me being transferred to intensive care, there really was no way for me to personally contact him. I did try.

I did get a brief moment to make a call but there was no answer at the house, so the next person I phoned was my youngest sister, she was two hours away and I knew if anyone could get through to hubby she would be the one to do it.  Not only did she do that, she found a babysitter for her two small children and raced to be by my side.  By the time she arrived my blood pressure was through the roof and I was a nervous wreck on my own thinking about having a baby ten weeks early.

I’m certain my sister’s arrival calmed me and my blood pressure enough, that I managed to convince my doctor to wait until my hubby arrived before proceeding.  Being the control freak that I am and having only had a three hour labour with my first and a 30 minute with the second, I also tried to negotiate an induction over a Caesarean.  Which might seem strange given my current state of health but I knew with a ten week premmie and a 1 and 2 year old, I would struggle even more with a Caesarean.  I was given six hours (which probably had more to do with the theatre schedule than appeasing me), unless my health deteriorated in the meantime.

I desperately tried to find someone attached to neonatal that could reassure me and explain what was to come for my ten week premmie child and what I could expect but the wonderful doctors and nurses were busy doing what they do best, saving lives.

Five hours later, hubby arrived and was seen by both the priest and our doctor. I honestly had no real idea just how bad things were, or how bad I actually looked. None.

Meg was born with both my hubby and sister in the room. The neonatal team arrived and raced Meg away and put a central line and what seemed like a multitude of other lines in and I continued to struggle. It was several hours later before I was able to see Meg again and even then it was brief. Poor little 1.6 kilo Meg kept forgetting how to breathe so was administered with a small dose of caffeine (at least that’s what I think they said at the time).  I remained in intensive care and had a few issues during the night but was released to the ward later the next day. 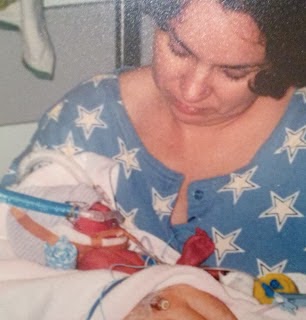 Meg spent just under a week in neonatal and was then moved to the special care nursery. Our time in neonatal was isolating and exhausting. My ward on the opposite side of the hospital felt like a whole suburb away. Two babies died while we were there and several others were touch and go. It was heartbreaking.

When it was time for me to be released we both made the move back to the private hospital so that I could continue to stay with Meg while she needed to be in the special care nursery.  Two weeks later we were allowed to come home and it was a tough three months of daily physio and three hourly expressed feeds, along with everything else that comes with having three kids under three and moving into a new house.

There is a lot more to the story (including why I’m wearing that awful star nightdress) but it’s taken me several years to get this much out and I’m not sure I will ever be ready to share the rest online.  It’s really hard to look at my now almost 15 year old daughter who is the second tallest in the family and think of her as the sickly little one with a hole in her heart that fitted into the palm of her father’s hand.

On a funny note, the very first time my eldest (two at the time) met her little sister in the special care nursery, she took one look at her all small and sickly with cords everywhere and said “NO”…. “I’ll take that one over there” and pointed to the ten pound diabetic baby in the corner.  Miss 2 also thought the blue book was the instruction manual for the new baby. If only!

Have you shared your birth story online? Did it go to plan?

Were you aware of Life’s Little Treasures Foundation and the fact that there are 76 premature births each day in Australia?

Linking up with My Home Truths for ‘I Must Confess’ Monday.