Just a word of warning … I’m so far from wordless this week, I may need an intervention as I share just some of the highlights from my recent Melbourne mystery tour.

As I go through the short supply of poorly taken photos on my phone from my recent trip, it’s becoming clear that I’m rather new to the travel blogging side of things and I was having far too much of a good time trying to fit everything in that photos were not my priority.

As a result, I may need to rethink my ‘photos or it didn’t happen’ approach to blogging because let me tell you … it did happen and right now it’s hard to know where to start with the over sharing for this trip.

The whole solo travelling thing is foreign to me. Why travelling full stop has been a long green with envy time coming. I was becoming rather tired of living vicariously through other bloggers and all their adventures, especially seasoned traveller and up and coming travel and lifestyle blogger Zita Hooke from It’s Time who is currently based in Toowoomba, Queensland and has just taken a year off to do some serious travelling.

I’m pretty sure it was a comment on one of Zita’s travel posts, where I joked about my upcoming trip to Melbourne not comparing with her latest overseas trip, that instigated this last minute ‘hook up’. I jokingly suggested Zita join me for a blogging blind date on this trip, not thinking for a minute this would appeal or be an option but secretly hoping it might and the next thing you know, I have one pretty cool travel companion flying in to join me.

I honestly couldn’t think of a better person to hold my hand on my first blogging mystery tour. A blogger after my own travel heart, who is in it for the memories and experiences but not necessarily the extreme adventure side of things. You could say playing it safe travel but still playing.

Even with my mystery blogging agenda and opportunities, meeting Zita really was the biggest highlight of my trip to Melbourne. I may have had a little too much fun with the blogging blind date angle and driven Zita around the bend with our cosy room and my crazy antics, but for me the trip was a whole lot of fun thanks to her flying in to join me.

Finally meeting a handful of my online Melbourne friends after years of being virtual friends was right up there for highlights. Especially Emma Bruty (above with Zita) who was a huge help with some of the behind the scenes blogging on Ms Mystery Case when I was going through more than a rough patch with my health last year. I’ve known Emma online for over 8 years, so it was nice to finally put a voice to the face and have a real hug after years of virtual hugs. 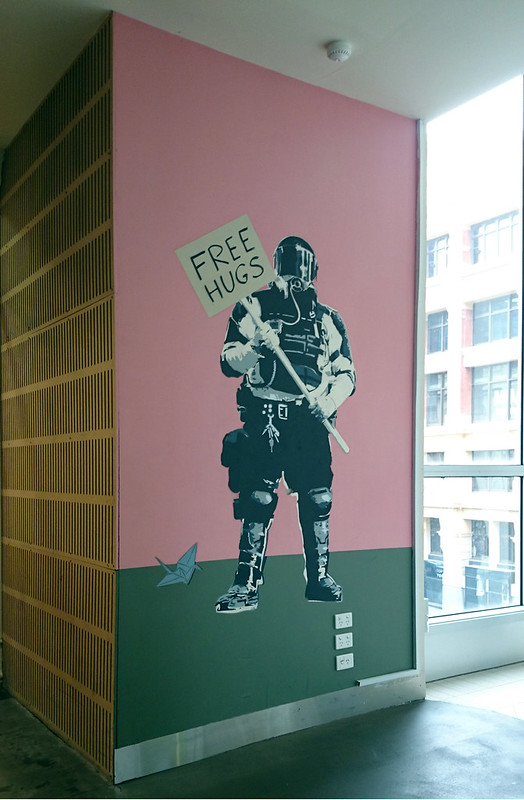 It was fantastic and a little bit surreal catching up over an intimate brunch at 1000 £ Bend with Sarah Barret (Creating Contentment) and Emily Hawker (Em Hawker Blog), two of the most down to earth and glowing from the inside out bloggers you will ever meet.

A funny thing happened on the way to brunch, only it wasn’t so funny. Apart from the fact we slept in and had a mad rush to get ready, I developed a dodgy swollen foot on our wild and windy walk thanks to me leaving home without my meds. I arrived at the brunch limping and needing to commence proceedings without one shoe. I was looking and feeling rather unkempt, something that would have made me feel ill at ease and run in the opposite direction under normal blogger meet ups but these amazing women were so welcoming and just gorgeous inside and out, both online and off.

It was only after we parted ways, that I realised I hadn’t actually managed to put any jewellery or lipstick on that morning or get any photos of us together. Talk about keeping it real and failing at the photo side of things, we were far too busy catching up and enjoying a nice meal.

There were also are couple of events on the agenda for our Melbourne mystery tour. On Friday evening we were lucky enough to catch the Australian premiere of the Austin to Boston film at ACMI and briefly catch up with Ty Johnson, the director of this enchanting film about 5 old VW camper vans, 4 bands, 3 thousand miles touring together over 2 weeks.

I had huge plans to drag Zita who also did an overnight flight with no sleep, like myself, to the after party at 1000 £ Bend but in the end knowing we had a huge day planned the following day we headed back to our motel just after midnight to finally get some much needed sleep.

Saturday night had us catching the cheesier than cheesy musical Strictly Ballroom. Zita had already attended the show in Sydney, so it was interesting to hear her take and discuss the difference of the show after almost a year playing. At the end of the show there was a meet and greet with the cast, who were collecting donations for the Mother’s Day classic they were participating in the following morning.

I really enjoyed the show and can’t wait for the musical to hit Perth. I just know I’m going to have a lot of fun on the red carpet for this one with my blogging friends!

There was also a lot of casing the menu on this mystery tour. We were mostly playing this side of things by ear as we explored this fifty shades of glorious grey city in between events. It was quite by accident that we stumbled on The Quarter in a little lane way near Flinders Street Station. 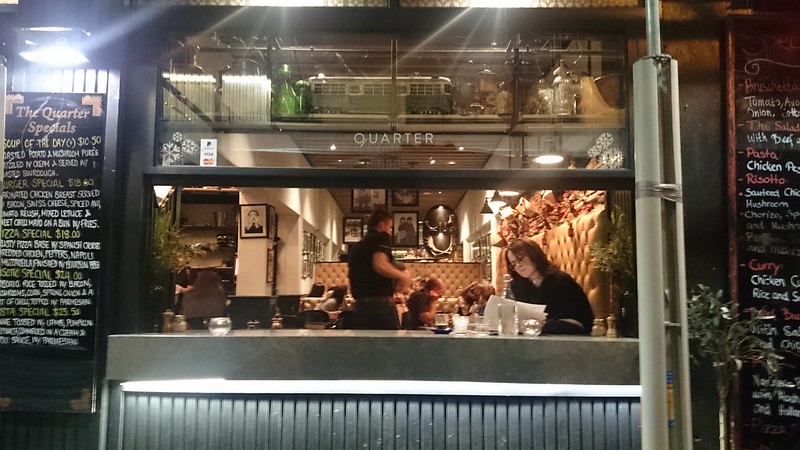 A lane way lined with restaurants with open air seating options under large umbrellas with gas heaters to keep you cosy. It was the atmosphere and the aromas that not only enticed us in but set the scene for the perfect blogging blind date night. After a night like this, I could easily see myself moving and completely entrenched in the Melbourne cultural scene.

Now there was a tiny bit of forced shopping that first day, when the layers the locals suggested weren’t really hitting the spot and Zita arrived without a jacket. I remember thinking ski gear at 4pm might be a new trend and then eyeing off some rather ugly thermals. It didn’t take long to  climatise and work the layers to our advantage.

It was a look out our hotel room window while thawing out, where we noticed smoke, bright lights and sirens coming from across the road at Southern Cross Station that saw the most surprising alteration to my mystery tour. A little bit of excitement that turned out to be a group of soccer supporters having more than a bit of fun with flares.

It wasn’t the soccer, flares or chants as such that presented an opportunity for adventure, more the realisation that we were within walking distance to Etihad Stadium and there was a footy game between St Kilda and the Western Bulldogs (I think) the following day at a time I’d earmarked for a spot of serious shopping.

Having never watched an AFL game live or otherwise and knowing how envious hubby would be, I jumped at the chance. Why, I even gave up an afternoon of DFO outlet shopping to make the game and was even prepared to line up in the cold and purchase last minute tickets at the gate.

I know, if you’ve been following the blog for a little while you would appreciate just how out of character this is for more. Why I suspect my hubby believes I may be allergic to sport and sporting venues. He also wants to touch base with Zita to find out how this all came to be and to confirm she didn’t need to drag me kicking and screaming to the game.

The fact we were heading to the Her Majesty’s Theatre for Strictly Ballroom afterwards and possibly overdressed worked to our advantage. The gorgeous women from Foodworks who are sponsors and have dedicated seats in the stadium, approached us as we waited in line, offering us their spare tickets to the corporate member area. We were seated right next to the St Kilda coaches box.

Now I’m pretty sure I just might be the worst person to watch a game of footy with. I don’t get half of it, especially the yelling abuse from the stands at the umpires (is that what they are called?) or the game itself because hubby is too transfixed when he watches the game to be bothered explaining it to me but we couldn’t have picked a better game to watch, apparently.

I believe it was one of the top 5 comebacks in AFL of all time for St Kilda that game, who went on to win the game when it looked a near impossibility and we just happened to be sitting in the thick of it with rather passionate St Kilda supporters. An interesting way to kick start my AFL adventures. I’m pretty sure thanks to Zita Hooke, I might just be hooked!

‘Who are you?’ were the first words thrown at me from my hubby when he heard just exactly what I’d gotten up to, not just with the footy but the entire weekend. I think he was rather envious, which makes a nice change given the shoe is usually on the other foot with him constantly travelling with work.

If you have a blog post worth casing this week, this is the place to link up.

BUT wait … there’s more. Only it will have to wait for another time! What have YOU been up to this week?