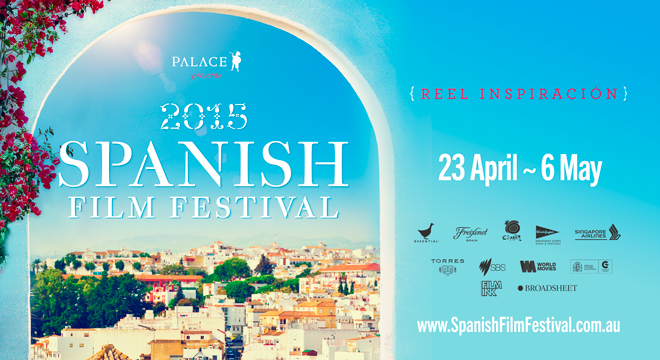 With the Spanish Film Festival returning to Perth from 23 April to 6 May, I’m hosting a little Spanish fling in the way of a giveaway this week.

With 37 feature films showcasing this year from Spain and South-America, I’m having a hard time deciding which films I should case first.

The special events are of course on the top of my list…..

The Festival opens (Thursday 23 April) with the biggest Spanish box-office hit in history, the mischievous romantic comedy SPANISH AFFAIR. A charming film which pokes fun at cultural differences as it tracks a young southerner who tenaciously seeks to win the heart of a Basque girl.

The after party rolls on at ‘The Bakery’ with drinks courtesy of Torres Wines, Spanish treats from Kamal’s Quarter and entertainment from Randa and the Soul Kingdom. With ‘The Bakery’ due to close soon, this will be the last after party for all Luna Palace’s foreign film festivals. So to me, this is definitely worth casing.

Another special event screening (Thursday 30 April), featuring THEY ARE ALL DEAD, a black comedy starring the beautiful Spanish actress Elena Anaya (Best Actress Goya-winner for her role in Pedro Almodovar’s The Skin I Live In).

As part of this special event, guests will be treated to complimentary Torres Wines, cheese plates and live entertainment prior to the feature.

Nominated for the Academy Award for Best Foreign Language Film, the Closing Night film (Wednesday 6 May) WILD TALES is out to prove that there is an animal in all of us. A buffet of dysfunction and bad behaviour from everyday people, pushed to their limits in a wicked anthology of six standalone short films that are unified by a theme of vengeance.

Far too many funerals and the most disastrous wedding springs to mind. Actually, the wedding featured in this film, has surprising similarities to my own wedding. It was painful to watch, to say the least. There’s a fine line between pleasure and pain and this film crosses the line on so many levels…. definitely worth casing!

As part of the closing night special event, guests will be treated to complimentary Torres Wines, guilty treats and live entertainment prior to the feature.

Aside from the special events, there’s plenty worth casing throughout the Festival. MARSHLAND is a particular award winning standout. This 1980’s set crime drama swept the Goyas (Spanish Oscars) this year, winning 10 awards including Best Film, Director, Actor and Original Screenplay. The film is a must-see for fans of True Detective.

Those in the market for a feel good, almost Hollywood style romance need look no further than GET MARRIED IF YOU CAN, INSTRUCTIONS NOT INCLUDED and SORRY IF I CALL YOU LOVE.

Foodies will love the mouth-watering documentary FINDING GASTON and there’s even something for children and all those kids at heart this year with DIXIE AND THE ZOMBIE REBELLION.

We have 5 double passes to the 2015 Spanish Film Festival up for grabs.

So I’m able to send tickets to you in time, this giveaway is going to be rather short and sweet.

For your chance to WIN, just leave a comment below letting me know which film you would most like to case with a friend and why.

5 winners. Game of Skill. Entries close 23/04/15 at 9 pm (WST – Perth time). Admit two pass valid for one session only. Subject to availability. Valid even with ‘no free tickets’ listings. Not valid for opening/closing night or any special events. Not transferable or redeemable for cash. Not valid on public holidays.

For more great GIVEAWAYS, head over and case our weekly Aussie Giveaway LinkUp!