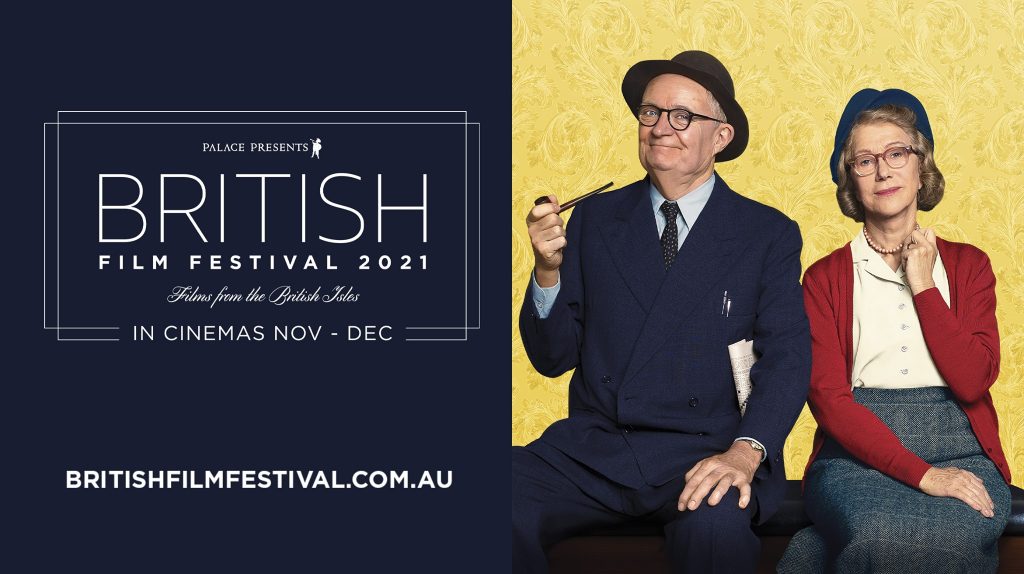 The Best of British Film coming to Perth

Presented by Palace Cinemas in association with Luna Palace Cinemas, the British Film Festival celebrates the best of British in a remarkable line up of 31 films, a number of which are screening for the first time in Australia.

Excellent performances from Festival favourites and brilliant newcomers will delight audiences and ignite their senses in a line up which includes the best contemporary cinema, documentaries and the chance to experience some of the most significant British films of the 1970s on the big screen.

The Festival opens with the highly anticipated Australian Premiere of THE DUKE, a heart-warming tale based on a 1961 true story of 60-year-old taxi driver Kempton Bunton who steals Goya’s portrait of the Duke of Wellington from the National Gallery in London, featuring beautiful performances from Jim Broadbent and Helen Mirren.

Kenneth Branagh has written and directs BELFAST, a personal eulogy to his hometown. Starring Jamie Dornan and Judi Dench, the film is a poignant story of love, laughter and loss in one boy’s childhood, set amidst the music and social turmoil of the late 1960s Northern Ireland.

Edgar Wright’s psychological horror fantasy LAST NIGHT IN SOHO starring Anya Taylor-Joy and Thomasin McKenzie, follows an aspiring fashion designer who is mysteriously able to enter the 1960s where she encounters a dazzling wannabe singer. The director has issued a message for patrons, urging them not to divulge the plot so as not to spoil it for others.

Documentary highlights include MY FATHER AND ME, a personal film from acclaimed documentary filmmaker Nick Broomfield about his relationship with his father, renowned industrial photographer Maurice Broomfield.

For music lovers ERIC CLAPTON: LOCKDOWN SESSIONS, is an intimately staged concert film from Clapton and his band, following the recording of a new live album, featuring acoustic renditions of past hits, and filmed in the English countryside during the pandemic.

The amazing life story of legendary author and sister of Joan, Jackie Collins, is told in LADY BOSS: THE JACKIE COLLINS STORY which reveals the untold story of a ground-breaking author and her mission to build a one-woman literary empire.

Food and wine lovers will rejoice in SPARKLING: THE STORY OF CHAMPAGNE, a documentary exploring the world behind the pop of the cork, narrated by Stephen Fry, plus high drama of one evening in a restaurant in BOILING POINT which follows an emotionally scarred London chef who struggles to keep it together, starring Stephen Graham.

This year’s Festival  features a special sneak preview of the highly anticipated OPERATION MINCEMEAT starring Colin Firth and Matthew McFadyen, based on  the Allies’ deception effort to keep the Allied invasion of Italy hidden and outwit German troops in WW2. Also based on true events, but during WW1, is THE WAR BELOW which centres on a group of British miners called upon to dig a strategic tunnel in no man’s land.

This year’s not be missed retrospective, ‘7 FROM THE 70s’ features a sublime selection of the best British films from the 1970s,  four of which  celebrate their 50th anniversary in 2021. A CLOCKWORK ORANGE (1971), Stanley Kubrick’s cult classic has been described as a disturbing and thought-provoking sci-fi film and will be presented in 4K restoration where possible; also from Kubrick, BARRY LYNDON (1975), set in 18th century England stars Ryan O’Neal as an Irish rogue who wins the heart of a rich widow and assumes her dead husband’s aristocratic position.

Loosely based on The Who’s 1973 rock opera of the same name and directed by Franc Roddam QUADROPHENIA (1979) is both an invigorating coming-of-age tale and depiction of the defiant, drug-fueled mod subculture of early 1960s London.  Directed by Joseph Losey with a screenplay by Harold Pinter, THE GO-BETWEEN (1971), depicts a torrid tale of love and forbidden love and stars Julie Christie and Alan Bates. The wonderful family film, THE RAILWAY CHILDREN (1970), adapted from Edith Nesbit’s much-loved 1906 novel of the same name, follows the adventures of the Waterbury Children.

THE LAST BUS is a touching adventure across Britain starring Timothy Spall, which follows the journey of a pensioner who travels from Britain’s most Northerly to its most Southerly point, using only local buses.

Olivia Colman, Colin Firth, Josh O’Connor and Australian star Odessa Young star in MOTHERING SUNDAY, a romantic period drama set in post-World War I England about a maid who secretly plans to meet with the man she loves before he leaves to marry another woman.

FALLING FOR FIGARO from acclaimed director Ben Lewin, is a romantic comedy starring Danielle Macdonald and Joanna Lumley about a young woman who quits her job and ends things with her long-term boyfriend to chase her lifelong dream of becoming an opera singer in the Scottish Highlands.

MISS MARX is the story of Karl Marx’s youngest daughter Eleanor who followed in his footsteps fighting for social justice and starring the mesmerising Romola Garai.

Timothy Spall stars in IT SNOWS IN BENIDORM about a man searching for his missing brother and THE OBSCURE LIFE OF THE GRAND DUKE OF CORSICA which is an intriguing meditation on life, love and architecture set during a pandemic in two different eras.

For Bowie fans, the biopic STARDUST follows a young David Bowie, played by Johnny Flynn, on a 1971 road trip across America when he was developing his Ziggy Stardust persona; NOWHERE SPECIAL is a poignant drama starring James Norton as a terminally ill man searching for the perfect family for his son; THE ELECTRICAL LIFE OF LOUIS WAIN starring Benedict Cumberbatch and Claire Foy, is a historic drama depicting the extraordinary true story of the eccentric British artist who transformed the public’s view of cats.

The full programme and tickets for the British Film Festival are now on sale, including the limited pre-Festival release of specially priced eTicket Bundles, exclusively at Palace Cinemas.