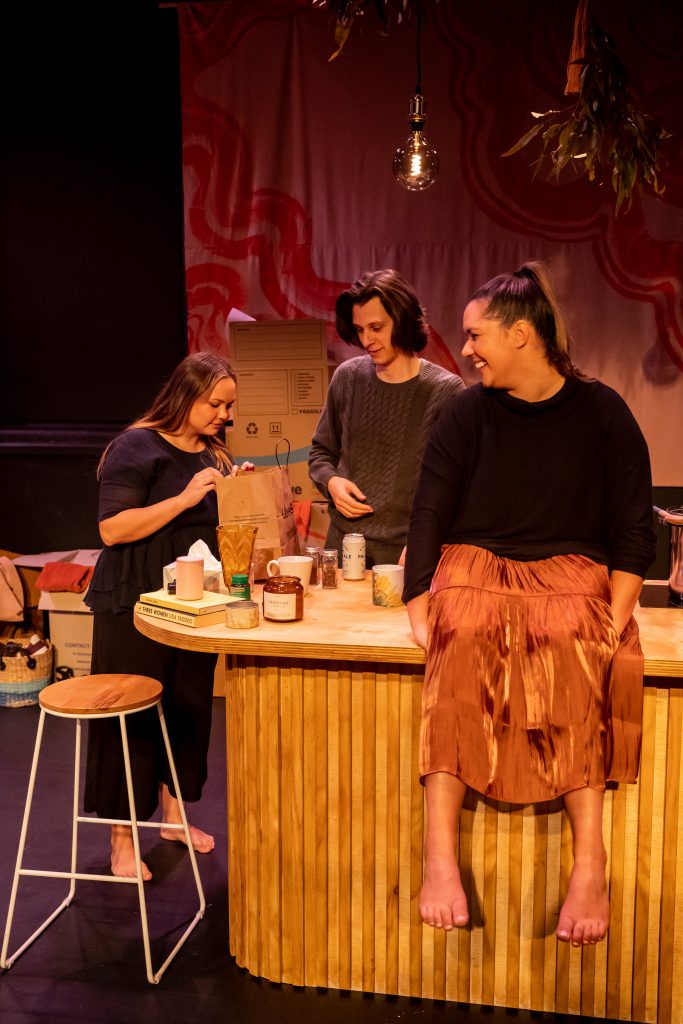 Following a successful run during Fringe World earlier in the year Kalyakoorl Collective bring a further refined edition of FIRE to the Blue Room Theatre as part of the Winter Nights program. Having missed the show during Fringe, I’d be interested to hear the comparison from anyone that has seen both. What was presented on opening night was touchingly relatable.

With the last week of the performance season aligning with NAIDOC week it’s rather apt that this exceptional piece from Kalyakoorl Collective, a brand new First Nations Theatre Company gets another moment in the spotlight.

FIRE follows the journey of two sisters as they learn to rebuild their fractured relationship after becoming estranged during their childhood. Two sisters, two sides, and everything that has been left unsaid. Holly and Lyss haven’t seen each other for years, so of course living together is the perfect idea. But what happens when the memory of someone you held so close, is a far distance from the person in front of you now?

Written and performed by Ebony McGuire (Cloudstreet) alongside Nadia Maritich (CO_EX_EN, Bilya Kaatijin), FIRE combines dance, poetry, song and storytelling to take audiences on a captivating almost therapeutic journey. Who needs therapy when you have family and sisterhood? No matter how fractured. Hmmm… possibly everyone!

My first foray into acting was in primary school. I think I was around 6 or 7. I was tasked with playing an aboriginal in an end of year play that was showcased at our local bowling club of all places. For the record, I was born in Australia and my heritage is Dutch, French and English. As there were no indigenous students at my school, I believe it was my mop of black curly hair and olive skin (more from spending far too much time at the beach without sunscreen than actual olive skin) that sealed the deal rather than any real acting ability on my part.

While the premise of that play back in the 70s is long lost on me, the fact they still felt the need to paint my face black at the time hasn’t. I still recall how weird it was being the only person that had issues with the paint aka boot polish. It just felt wrong. I’m sure if I could recall the play itself I would be dealing with several more shades of wrong. It certainly wouldn’t have been allowed to proceed today. Thankfully.

It’s refreshing to now see initiatives such as the First Nation team behind FIRE that bring the culture into a new light with theatre companies such as The Blue Room Theatre fostering these endeavours more appropriately and in turn opening the language, culture and storytelling to a much wider audience.

I must confess, for many years I held a number of misconceptions when it comes to indigenous culture, especially the language. Almost treating it like a forbidden fruit and not really knowing why. The main misconception being that it was a secret in-house dialect. Reserved for only a chosen few. When the truth is many Aboriginal languages and dialects became extinct because their speakers were forbidden to use native language over many years under white Australian assimilation policies.

Having recently had another slow and tender introduction by way of Award-winning Noongar singer Gina Williams on opening night at The Perth International Cabaret Festival at His Majesty’s Theatre, I have a new appreciation and growing interest with this beautiful but endangered language. It’s a truly captivating language if you stop to appreciate it.

It was this new appreciation that had me lapping up the translated introduction to FIRE as well as all the cultural aspects of the production. The relatability for me came from the fractured sister relationship (you might recall my personal post: what doesn’t kill you… ), the dysfunctional family dynamics especially in relation to their grandmother and the different aspects of grief.

Amongst the chaos and packing boxes (which were almost anxiety inducing for me having moved 24 times) I welcomed the heart warming comical elements especially from ‘the boyfriend’ (Christopher Moro) who played the part to perfection.

It wasn’t just the comical elements at play that warmed my heart, it was also the authenticity, rawness and relatability of all three characters and the believable dynamics between them. Filled with comedy, culture and a whole lot of koort (heart) FIRE has a relevance that needs to be seen by a much wider audience.

While a relevant and relatable tale in any culture, FIRE is a powerful First Nations work of art that is a true testament to a culture and language that really deserves more than a moment in the spotlight. The cultural snippets of song, dance and dialect offered up in Fire have reignited a fire in me to learn more. It’s these aspects that have me giving this production 4 stars as well as putting it on our Worth Casing top 5 list for must experience during NAIDOC week.