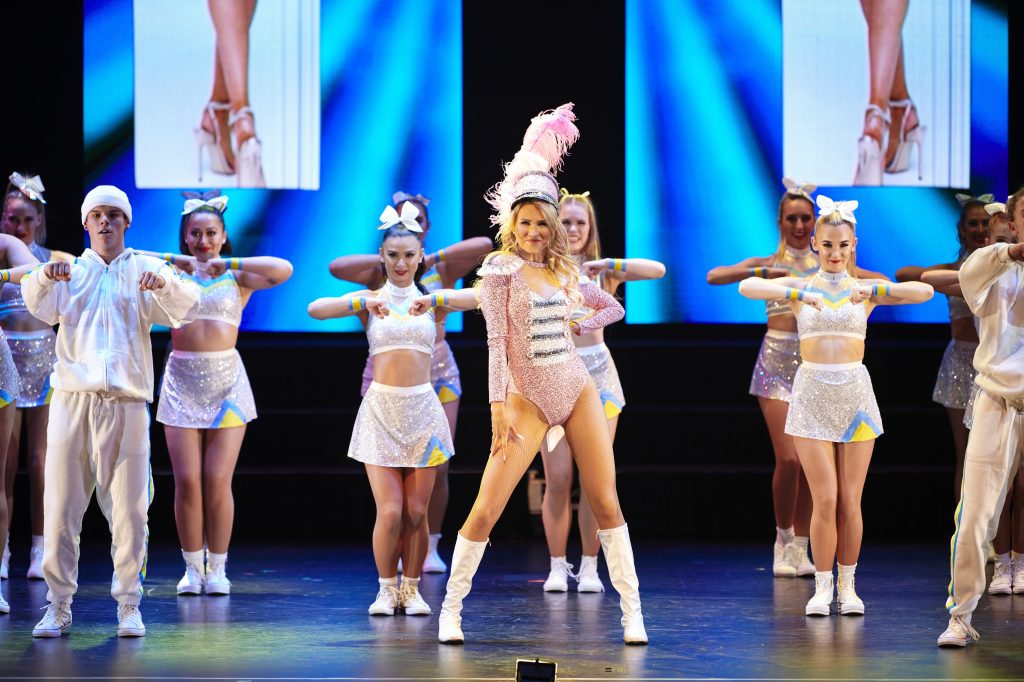 Action-packed and exploding with memorable songs and dynamic dances,

Legally Blonde is so much fun, it should be illegal!

Crown Theatre foyer was a sea of pink with a scattering of leopard print for opening night of Legally Blonde last night. With venue restrictions now lifted it was nice to be back at the theatre in what appeared to be a full house.

Having only seen the original movie in its entirety once, I did initially question if I needed to revisit the film or pick up the book before attending. The consensus was mixed, with seasoned fans slightly horrified by my question in the first place. Some even going as far as suggesting they were more worthy to go in my place (I directed them to our giveaway). In the end, time wasn’t on my side to revisit the film but I’m pleased to report it didn’t matter. Opening night was an absolute blast for me. From start to finish. I wasn’t alone in this regard.

With a fully WA ensemble, understandably the audience for opening night seemed to consist of a large component of family and friends. Which meant it didn’t take too much bending and snapping to whip the audience into a full blown frenzy. It was obvious from the get-go that we were sitting pretty in the family and friend zone, who provided us with a steady stream of yahooing and screaming throughout the production which only added to the experience.

Having said that, it wouldn’t matter what night you attended or how many friends of the ensemble were in the audience, Legally Blonde is one of those fun-filled productions that warrants a high energy, overly enthusiastic audience.

No matter where you are in terms of familiarity with this production, you aren’t going to be disappointed. Although, I’m assuming if you have a full blown love affair with Legally Blonde you are going to be even more in love. There’s a whole lot to love about this music from Hama Productions.

If, on the odd chance, you are a relatively newbie, let me break it down for you…

Based on the much-loved movie of the same name, this life-affirming musical follows the transformation of fashion and style devotee, Elle Woods, after her life is turned upside down when her boyfriend, Warner Huntington III, dumps her before leaving California to attend the prestigious Harvard Law School.  Determined to get him back, Elle follows Warner to Massachusetts and ingeniously charms her way into Harvard; but, from there, things don’t quite go according to plan.

While Elle’s adventures don’t go to plan, everything on opening night seemed to go off without so much as a hitch. Personally, I felt the music was overpowering the vocals in one or two parts but my ears aren’t probably what they used to be and you seriously couldn’t fault the production overall.

Interestingly, the show’s director John O’Hara who also plays Professor Callahan passed the baton to alternate Steve Simmons for opening night who seemed to hit all the right notes. I’m hoping to return for seconds this week to see John in action.

Elaina O’Conner was an absolute natural as Elle bringing an air of accomplishment and energy to the stage that’s hard not to love. Elaina’s almost instantaneous outfit changes were as impressive as her repertoire and stage presence.  Elle’s beautician friend, Paulette played by Annie Aitkin gives some of the most powerful performances of the production.

Lloyd Hopkins as law lecturing assistant Emmett Forrest has more than a certain charm.  Vincent Hooper who plays Kyle takes charm to a whole new level. Out of all the main players in this musical Vincent possibly has the least amount of stage time but the most amount of presence. He knows how to make an entrance and keep it.

Greg Jarema playing Warner and Charlotte Louise as his new love-interest Vivienne both warrant mentions as does Zowie Simpson playing Brooke Wyndam together with the entire ensemble. With an incredibly large cast and creative team it’s impossible for everyone to rate a mention here. Although deserved.

Which brings me to the dogs. Yes… there are two real life dogs in this musical. Both Bentley (Bruser) and Phoebe (Rufus) are utterly adorable and pretty much steal the show each time they are on stage and I’m not even a dog person.

On the surface Legally Blonde makes a high energy chorus line to your heart via your funny bone. Scratch the surface, go beyond the girl meets guy, girl and guy date for umpteen years, guy dumps girl for superficial reasons, girl goes to extreme measures to change herself to win the guy back and there’s a lesson or two in this for all of us. Dig a little deeper and you have to question if it’s not best to just sashay your way back to the theatre for more of this fabulousness.