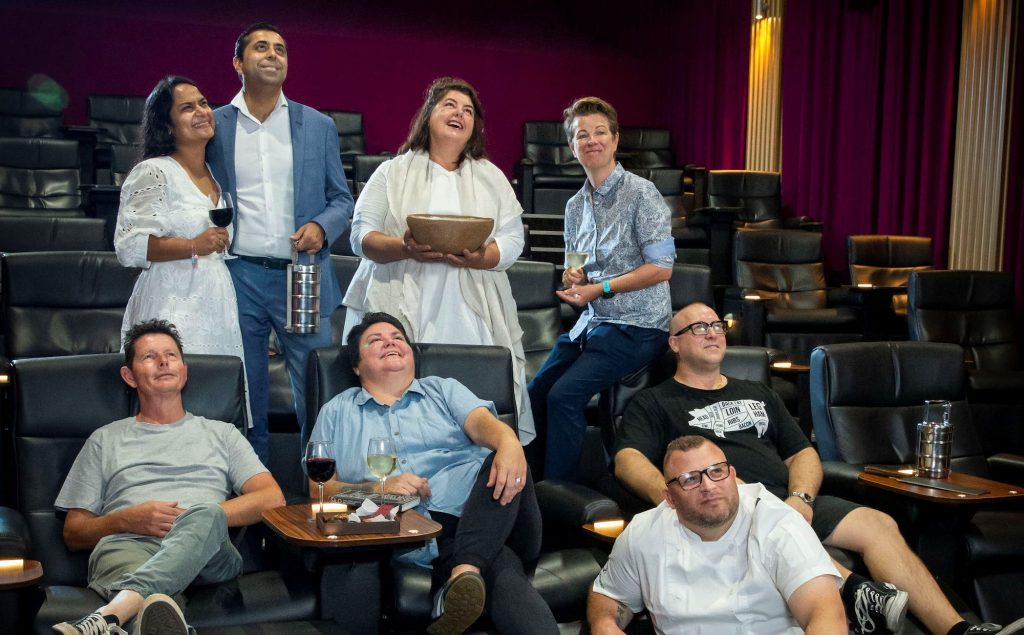 Each screening has a thoughtfully curated food and beverage experience at its heart.

From Damon Gameau​, the director of That Sugar Film, comes 2040​.

An aspirational journey to discover what the future could look like if we simply embraced the best that exists today. This is the narrative the next generation needs to see, to aspire to, and to believe is possible.

I’m not normally a huge fan of documentaries. It was the clever style in which this particular film was delivered, together with it’s incredibly important take-home message that made this my favourite film for 2019. An interesting and welcoming choice for this Festival.

Ottolenghi and The Cakes Of Versailles

An extravagant feast for the senses, exploring the mouth-watering intersection between food, culture, and history. Documenting the collaboration between world renowned chef Yotam Ottolenghi​ (Plenty, Simple) and the Metropolitan Museum of Art in New York, OTTOLENGHI AND THE CAKES OF VERSAILLES follows five visionary pastry makers. A veritable who’s who of the dessert world is assembled – including Dominique Ansel and Dinara Kasko – as they race against the clock to construct a decadent food gala based on the sumptuous exhibit: Visitors to Versailles​.

The Perth preview for this one came with a delicious cup cake and had me heading for the nearest pastry store on the way home, as well as adding a few more locations to my travel bucket list.

A culinary legend provides a frustrated office worker with a new recipe for life in Julie & Julia, the true stories of how Julia Child’s (Meryl Streep) life and cookbook inspired fledgling writer Julie Powell (Amy Adams) to whip up 524 recipes in 365 days and introduce a new generation to the magic of French cooking. Stanley Tucci (The Devil Wears Prada, Supernova) co-stars in director Nora Ephron’s delicious comedy about joy, obsession and a whole lot of butter. Bon appétit!

Having completed my own cover to cover cook book challenge a few years back, I’m not sure I’m game to revisit this film and reignite that fire. Our viral Eggspresso foodie audience (now at over 5m views) might persuade me otherwise. They’ve certainly encouraged me back into the test kitchen this past month.

Remy (Patton Oswalt), a resident of Paris, appreciates good food and has quite a sophisticated palate. He would love to become a chef so he can create and enjoy culinary masterpieces to his heart’s delight. The only problem is, Remy is a rat. When he winds up in the sewer beneath one of Paris’ finest restaurants, the rodent gourmet finds himself ideally placed to realize his dream.

I haven’t revisited this cute film in ages. WA Good Food Guide… you had me at French themed lunchboxes.

Middle class housewife Ila is trying once again to add some spice to her marriage, this time through her cooking. She desperately hopes that this new recipe will finally arouse some kind of reaction from her neglectful husband. She prepares a special lunchbox to be delivered to him at work, but, unbeknownst to her, it is mistakenly delivered to another office worker, Saajan, a lonely man on the verge of retirement. Curious about the lack of reaction from her husband, Ila puts a little note in the following day’s lunchbox, in the hopes of getting to the bottom of the mystery.

This begins a series of lunchbox notes between Saajan and Ila, and the mere comfort of communicating with a stranger anonymously soon evolves into an unexpected friendship. Gradually, their notes become little confessions about their loneliness, memories, regrets, fears, and even small joys. They each discover a new sense of self and find an anchor to hold on to in the big city of Mumbai that so often crushes hopes and dreams. Still strangers physically, Ila and Saajan become lost in a virtual relationship that could jeopardize both their realities.

I  attended the Perth preview of this delightful film that included a little Indian cuisine pre-film to whet the appetite. Having glimpsed the menu, I could happily return for seconds and thirds with this one!

Cloudy With a Chance of Meatballs

When Flint Lockwood’s (Bill Hader) latest contraption accidentally destroys the town square and rockets up into the clouds, he thinks his inventing career is over. Then something amazing happens as delicious cheeseburgers start raining from the sky. His machine actually works! But when people greedily ask for more and more food, the machine starts to run amok, unleashing spaghetti tornadoes and giant meatballs that threaten the world! Now it’s up to Flint, with the help of weather girl Sam Sparks (Anna Faris) and Steve, his talking monkey assistant, to find some way to shut down the machine before the world is covered in super-sized meatballs!

Much like the sponsor Harvey Beef this film has been a family favourite, it would be an interesting experience to revisit this one with my now fully grown foodie family.

Starring Johnny Depp and Judi Dench and Julliette Binoche, Chocolat tells the story of Vianne (Binoche) when she arrives in a tranquil, old-fashioned French town. In her very unusual chocolate shop, she creates mouth-watering confections that almost magically inspire the straitlaced villagers to abandon themselves to temptation and happiness. When a handsome Irish Gypsy (Depp) arrives in town, Vianne is finally able to recognize her own desires.

Given my French heritage and sweet tooth, as well as the fact I’m a bit partial to a Sue Lewis Chocolatier creation, I could easily see myself revisiting this film with friends. This is one of those foodie occasions where it would be safer to leave my chocoholic hubby at home. I don’t share good quality chocolate. With anyone.

THE TRUFFLE HUNTERS follows a handful of men, seventy to eighty years young, in Piedmont, Italy, on the search for the elusive Alba truffle. They’re guided by a secret culture passed down through generations, as well as by the noses of their cherished and expertly trained dogs. The documentary subtly explores the devastating effects of climate change and deforestation on an age-old tradition through a visually stunning narrative that celebrates life and exalts the human spirit.

When our trip overseas cancelled due to Covid I turned to food experiences and a lot of foreign film to sooth the soul. As a family of five foodies who all love their truffle, I was excited to see the invite to the Perth preview of The Truffle Hunters land in my inbox. I was also having a hard time picking which family member would join me. I joked at the time that I was planning on taking some truffle salt to waft in the air during the film for a more immersive experience. All these months and a number of lockdowns later, I still haven’t seen this film.

So, YES… this is most certainly on the top of my list this festival. Having just taken delivery of a gourmet truffle hamper, you can expect a truffle party at my place afterwards.

Variety is the Spice of Life…

Variety, for me, really is the spice of life and there is certainly enough film variety to satisfy the most discerning of taste buds with this festival. The mouth-watering menus accompanying each film are guaranteed to take your cinema experience next-level.

With travel currently limited and my passport feeling neglected, I’m heading to film and theatre for a little escapism these days. The more immersive that experience the better and this combination of film with perfectly paired fine food hits all the right notes for me.

Having seen all but one of the films (The Truffle Hunters) from the tasty line-up, it will be the menu that pulls me back in to revisit a film given I’m already playing a game of catch up with films missed during lockdown. There is also a rush of new releases keeping me busy a few nights each week right now.

As I drool over menu choices attempting to select my favourites, I’ve made it easy for you to ‘Case the Menu’ for each film. You just need to click through on the TICKET/MENU links above for the film/s that interest you.

While we are on films and Event Cinemas, they are running Family Saver Sessions this school holidays with tickets for $11 on select films if you are a Cinebuzz member.

Not a member? It’s free to join at cinebuzz.com.au.