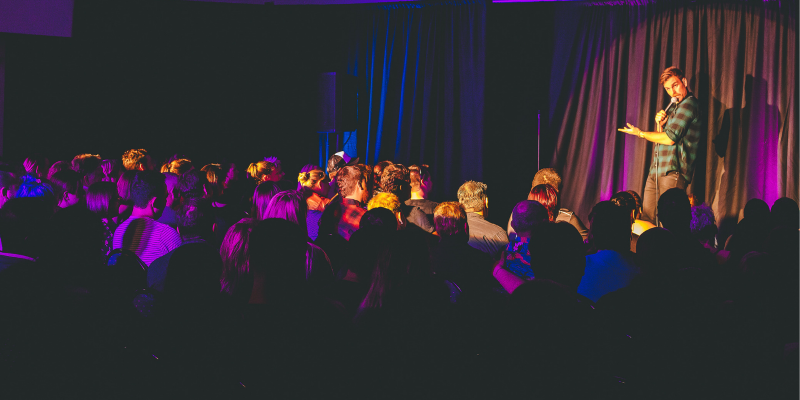 The 2021 edition of the Perth Comedy Festival brings together world class comedians and homegrown favourites for a month-long celebration of laughter and LOLs with shows at the Regal Theatre (Subiaco), Astor Theatre (Mt Lawley), Comedy Lounge (Perth CBD) and Freo Social (Fremantle) from 19 April – 16 May.

A Scotsman granted a travel exemption by the Australian Government, a metal-loving iso-cook with over 2M social media followers, Australia’s favourite adopted son of comedy and a foul-mouthed existential purple puppet are just some of the highlights of this year’s festival.

Funny folk from around the world who call Australia home will perform alongside some of the best local talent Perth (and Australia) has to offer in what promises to be a much-needed month of laughs.

The Festival is pleased to present comedic powerhouse Daniel Sloss (SCO) who has been granted a special exemption from the Australian Government to perform his highly anticipated 11th solo show Hubris – Friday 30 April at the Astor Theatre and Saturday 1 May at the Regal Theatre. At just 30-years-old, but performing since he was 16, Sloss has firmly established himself as one of the world’s most significant and successful touring stand-ups of his generation.

Foul-mouthed quarantine cook and metal-head Nat’s What I Reckon performs On Purpose –  Saturday 8 May at the Astor Theatre; a show that promises to be an epically entertaining evening featuring previously unreleased videos and never-before-seen outtakes.

Australia’s favourite adopted son of comedy, Arj Barker, delivers his brand new solo show We Need To Talk over three nights from 6 – 8 May at the Regal Theatre and one of our nation’s best comedians, Akmal, spins comedy gold with his new Live show – May 14 and 15 also at the Regal Theatre.

With sell out shows in LA and New York early last year, then spending 12 months locked in a room with a typewriter, Randy Feltface, delivers Purple Privilege at the Comedy Lounge on Friday 30 April and Saturday 1 May. The foulmouthed, existentialist, sober, vegan puppet is best known as a frequent collaborator with Sammy J, but this year performs his well-honed comedy hour solo.

The loosest Aussie Bloke there is, Alex Williamson, performs Oi Mate Saturday 1 May The Astor Theatre and ARIA Nominee for Best Comedy, Anthony Salame, is back in Australia after an 8-year hiatus from live comedy – performing at the Astor on 8 May.

ABC darlings Gen Fricker and Nina Oyama perform at the Astor; Triple J’s Fricker returns with a new hour of stand-up performing Live at the Astor Theatre on Friday 30 April and Saturday 1 May, whilst actress, comedian, writer Oyama, best known for her role in the ABC comedy series Utopia, performs Nina Oyama Is Doing Me Right Now on Friday 30 April.

Winner of Best Newcomer Sydney Comedy Festival 2019, Chris Ryan, performs Big Hair, Big Dreams on Friday 7 May at the Regal Theatre and 2019 Raw Comedy State Finalist (NSW), Floyd Alexander-Hunt, gives us Think Floyd on Saturday 8 May at the Regal Theatre; combining quirky charm with virtuoso violin these newcomers are not to be missed.

The Perth Comedy Festival presents two Gala’s at The Regal Theatre on 28 April and 5 May as well as showcases for our friends south of the river at Freo Social on 29 April and 6 May.

The Biggest Comedy Show on Earth runs Thursday – Sunday throughout the festival (29 April – 8 May); it’s speed dating with comedians and it’s excellent value.

Get your tickets via
www.perthcomedyfestival.com