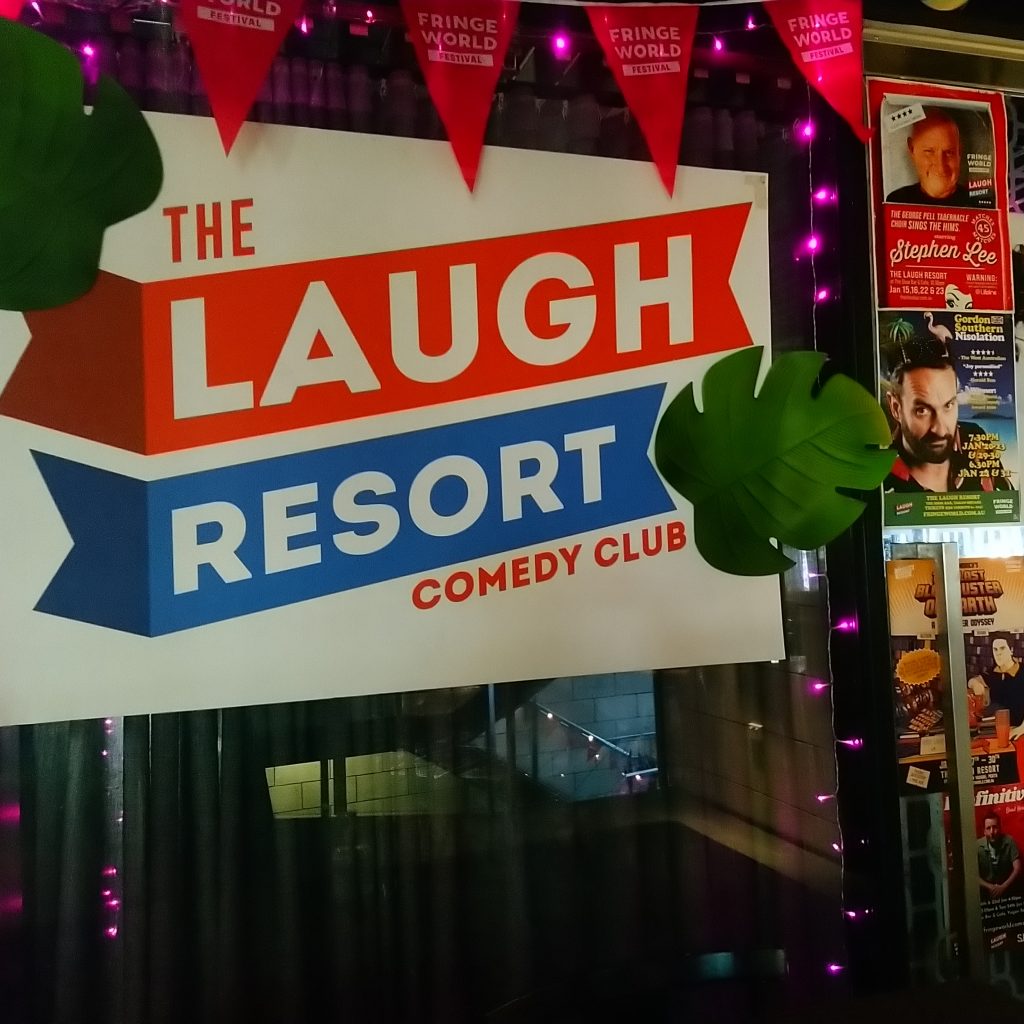 Last night saw us back with The Laugh Resort Comedy Club, one of my favourite hubs for comedy this Fringe. Located upstairs at The Shoe (Bar & Restaurant) there’s a whole lot to love about this Comedy Club all year round.

The Laugh Resort was incorporated in 1991 by a group of WA comedians to encourage and promote all forms of live comedy entertainment. It has been a not-for-profit from the get-go providing income and opportunities for Perth comedians as well as enhancing the Perth Comedy scene in the process with a changing weekly lineup of the newest and best local, national and touring comedic talent.

From Aussie legends such as Greg Fleet and Chris Franklin, to international comedy superstars Tim Minchin and Stewart Lee, many a comedy icon has dropped in to grace The Laugh Resort stage. It’s also been a launching pad for comedians such as Dave Callan, Rove, Claire Hooper, Jim Jefferies, Xavier Michelides and Hughesy.

Last night it was Australian comedian Scott Limbrick’s turn in the spotlight for the world premiere of his debut solo show The Last Blockbuster on Earth. Usually based in Victoria, Scott was due to premiere the show during Melbourne’s International Comedy Festival in 2020 when after a quick trip to Perth he found himself locked in the state and living with his partner’s parents for almost a year.

Scott’s comedy career has already taken him to some interesting places. He has presented for Comedy Central UK, written for the BBC, ABC and SBS Comedy, performed as part of the Footlights and Soho Theatre Young Company and is a house sketch and improv performer at Melbourne’s Improv Conspiracy Theatre.

Welcome to the Jungle

Just one of a handful of accidental WA resident artists this Fringe, Scott brings to Perth a high-energy, surreal character sketch show, set inside the last remaining video store on earth with a multitude of characters coming to life for one lively and laughable hour.

Having fired up the VCR, our host with the most  takes us on a mind bending genre journey of the VCR ages. Condensing a decade of cinematic history over one hilarious hour. Everything from action films, family comedies, biopics, French New Wave, and my favourite of the genres… drama.

As someone that predominantly reviews films and live theatre, this sketch show that combines the two was always going to tickle my fancy. I just didn’t realise how much so. I was taken back to the good old days when our stay at home date nights (because our babysitter of choice had a life) would have us, perusing the Blockbuster aisles at length. With the promise of an escapism of sorts with the world at your fingertips through videos and later DVDs.

Half the fun was choosing the films to bring home and taking advantage of the special deal that usually included two overnight blockbusters and five weekly films. With differing tastes, there were constant battles over genre and a lot of compromise on my part. Watching hubby flick through the Netflix menu at length to find a common thread just doesn’t compare.

So it was interesting to head back to a different time with this show. Scott was killing me softly one pie chart and movie genre at a time. The perspective here is witty with an underlying brilliance that had me wishing there was a VHS of the show to take home, so I could hit the pause and rewind buttons to make sure I hadn’t missed something.

There were a lot of take homes from this show. More so for one particular audience member who almost stole the show at the end. So yes, this sketch show does have a little audience participation element. Nothing that would have you heading for the back row. All a whole lot of fun!

The only thing that would have made this show better for me (aside from a VHS of the show), is a Superman style phone booth on stage for quicker outfit changes.  Scott is, however, the master of quick outfit changes. If there was an award for most outfit changes in under an hour this Fringe Scott would most certainly take the cake.

The Last Blockbuster on Earth

The Laugh Resort at The Shoe Bar, Yagan Square, Perth