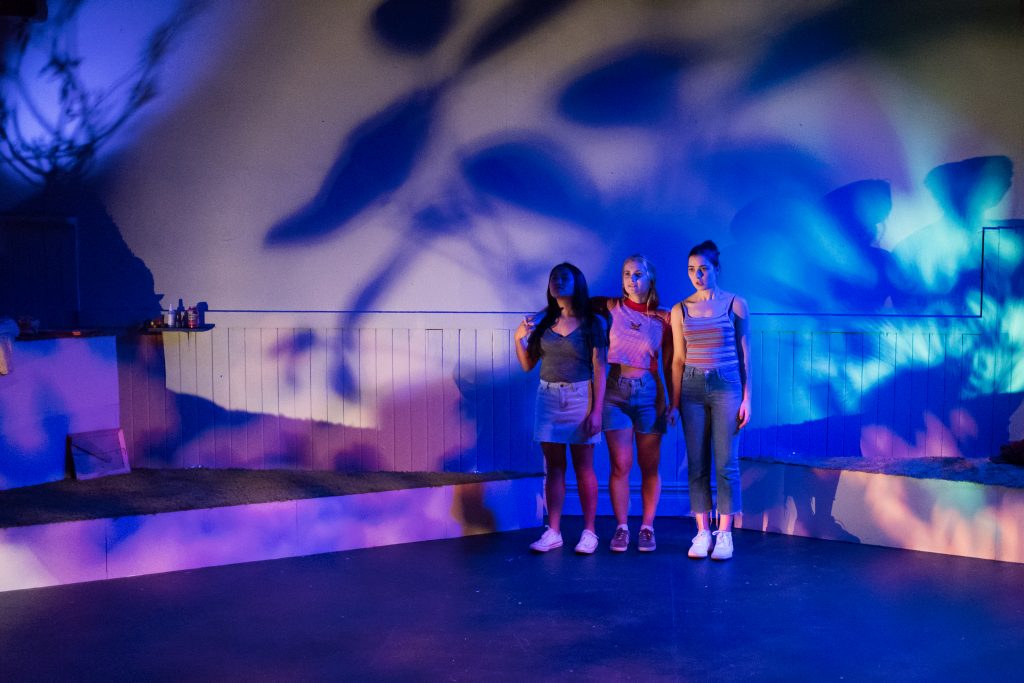 See You Next Tuesday

See You Next Tuesday is the latest project from critically acclaimed local theatre company Static Drive Co. A fierce, feminist and funny romp through puberty and the sexual life of a teenage girl, now showing until July 6 at The Blue Room Theatre.

Uniting the talents of some of Perth’s most exciting up and coming artists, the script was originally developed as part of the Barking Gecko & Australian Theatre for Young People’s ‘Fresh Ink’ writing development program and is a breath of fresh and frank feminist air.

Seventeen year old Evie loves algebra, hates it when people skip foreplay, and never sleeps with the same guy twice. A comedy born from all the things that Dolly Doctor never taught you, SYNT is hot of the press and bursting with attitude. Sex, drugs ‘n’ fractions; it’s girl-talk on a whole new level.

As I mum of three teen daughters, I was a tad apprehensive going into this play. I’m currently living through the teen years with, for the most part, three really great and easy-going daughters. Do I really need a frank and fresh take on reality and more attitude? Can my current reality not include an ignorance is bliss, get out of jail free card? Do I really want to see how the other half live? Is this production going to slap me in the face with a big dose of reality and put me in the other half camp? Is it time for me to join over-thinkers anonymous?

Walking on set to get to our seats I felt like we’d entered the twilight zone, as we refer to it at home, in regard to the state of play with our three teenage daughters’ bedrooms. Clothing scattered from one end to the other, discarded soft drink cans, a Nintendo Switch box displayed proudly on a shelf and music blaring helped set the scene and was not lost on me.

A few minutes into the production, my head was spinning when the three actors are all speaking different dialogue at once. I was feeling like we had in fact been transported into one of our girls’ rooms with speech bubbles now permanently over their heads, giving us more than an insight into their minds. Something you might think a parent would find useful?

Knowing what your teen is thinking and feeling, an ability to read behind the lines, occasional insults, miscommunications and misconceptions… should be a good thing. Almost a superpower… Right?! It actually left me feeling uncomfortable and a little ill at ease, to say the least given the sexual context. It also, in all honesty, had me looking, very briefly, for an escape. Oddly at no point (apart from when I read the flyer for the show*) did I feel the need for a translator as I sometimes do when conversing with our girls and their friends.

Ten minutes in and I was beginning to appreciate that perhaps not knowing the full workings of a teen’s mind and just getting through this stage, like any other stage of parenting might be our best chance at relationship preservation and getting out the other side relatively unscathed. Being able to find the funny side and an ability to not laugh out loud when conversing with teens might just be a better superpower to aim for.

Once I took the parenting hat off, I enjoyed this play more than I thought I would. It’s cleverly done. Three actors playing the one role, at once, offering a fresh and often unsettling perspective on life, love and all that comes with puberty in this modern age.

Without wanting to throw spoilers into the mix, Evie’s superpower and outfit changes perplexed me and were the basis of our post-show debrief over drinks at the bar. Grandeur, delusion, entitlement and a sense of self-importance also came into play but again I’m possibly putting my parenting hat on here and too far removed from my awkward teenage years and now at a stage where I’m a little delusional, thinking I somehow skipped that awkward and often naïve phase of my teenage years.

Equal parts hilarious as it was confronting, given I’m a mother of three teen daughters. See You Next Tuesday is fairly tame in terms of warnings… just the two. Coarse language and adult themes. Adult themes does, however, cover a lot of ground here but in the scale of things and showing my age (not that I haven’t already with three teens), it’s along the lines of the orgasm scene from When Harry Met Sally.

Hubby my plus one for the night, enjoyed the film just as much as I did and while he struggled with the moments in the play where the actors all talk at once, he left his parenting hat and the hang ups that come with that at home so it was purely a case of too much going on and wanting to hear all of it. For me it summed up the workings of the teenage mind and the chaos that comes with that beautifully.

The show doesn’t make me want to head back in time and relive or revisit those years personally. It does have me grateful that I’m more than on the other side of it and technology wasn’t so prevalent in my dating days. It also has me looking at my teens in a frank and fresh, keeping my distance (unless needed), ignorance just might still be bliss kind of light. Which given the state of play right now, can’t be a bad thing.

SEE YOU NEXT TUESDAY

*NOW… Can someone please explain NSFW to me and while you are at it, we need to have a conversation about Netflix and Chill (NFAC)???? To me… Netflix and Chill is the modern take on ‘Would you like to come up for coffee?’ when generally coffee is the last thing on the menu. Although perhaps I was hanging in the wrong circles and dating the wrong guys back in the day and coffee actually meant coffee to most? Happily married for almost 24 years, I’m without a doubt wanting a coffee if it’s offered and a binge on Netflix while actually chilling on the couch with or without hubby always makes for a nice relaxing night in. After a week of five films, six shows and an expo, I could do with some chill right about now.