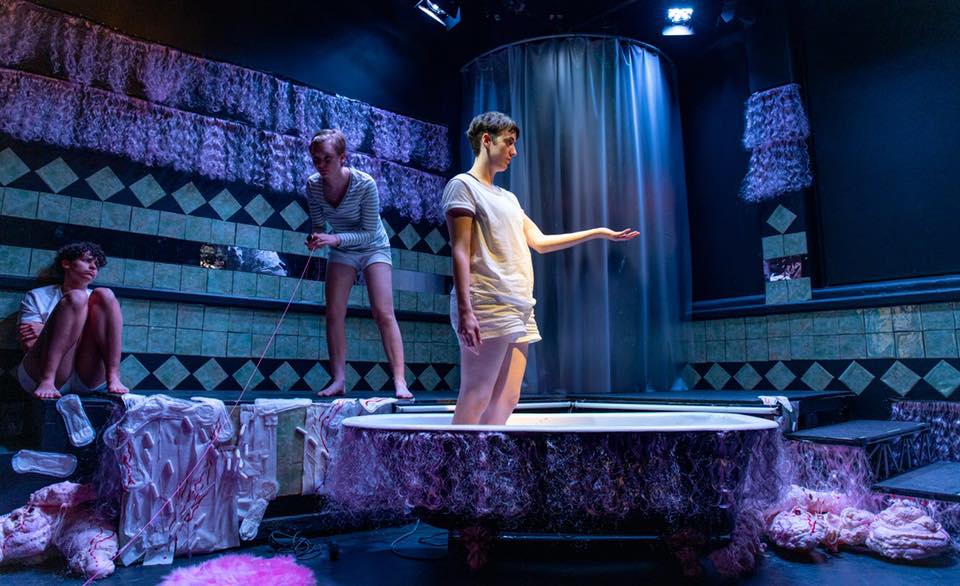 I was more than a tad nervous going into this show. I take great pride in selecting the most appropriate plus one available to match the show. On this occasion, I had an inkling the subject matter and potentially the way it was presented might not be for hubby. The truth is… with hubby home from interstate, I was craving a catch-up, so my regular pool of plus ones that would be all over this like a rash didn’t stand a chance. Other truth, I sent hubby in blind not giving him an inkling of what was to come because I strongly suspect had he read the blurb for the show he would have passed. He would agree with me here.

There will be blood. Menstrual blood.

Inspired by true tales of body horror and the prom scene from Carrie, Unrule is a spooky-scary and comedic premiere that teases apart our complicated relationships with female bodies.

From light bladder leakage to serious accounts of medical mistreatment, they attempt to live with the monsters within by bringing them to life in grotesque, glorious, and moist forms.

Be the first to strap into this cabaret meets surreal spectacle that can turn from hilarious to horrifying on a dime.

I’m honestly not sure where to start or finish for that matter, with Unrule. Running the gauntlet myself, with an ongoing and relentless chronic illness, there were parts of the show that touched a raw nerve. The dismissive doctor element, the long-winded road to one wrong diagnosis after another, the continued band-aid approach and waiting game which impacts your ability to live a normal life. There’s also the isolation and mental health aspects that come with that. Yes, the comic elements and theatrics help to make the subject matter a little more palatable but even still, this show isn’t going to be for everyone.

To me, the production much like the subject matter was a little raw. I suspect the male element in the audience, as well as the teens approaching or new to womanhood, would have felt like they were witnessing an unbelievable story of horrors.

Much like childbirth and child-rearing, where you can’t really tell anyone what to expect and be believed, so much goes unspoken, I think the same rings true for women’s issues like that time of the month. Which is just one of a handful of delicacies being thrown at you from centre stage, no holds barred… although I find myself wanting to say… no holes barred here. Of course, speaking figuratively not literally.

YES, there is a nudity warning but I failed to see any nudity. I’m not sure if there was a last-minute change in order, I completely missed something or the blurb factor managed to get it wrong. Other warnings include strobe lighting, adult concepts and running water which should have you avoiding drinks at the bar, as well as emptying your bladder prior to the show.

There were several impressive elements at play here and while you could question some of the almost amateurish aspects in terms of delivery, I believe what transpired will seem more relevant to some than others. For example, the first muffled audio playback and the parts of the show that are performed in the dark. The chaotic and questionable format with cabaret-style tables and chairs in the front row, together with the use of GST laden women’s products for props. It all ties in. I think you just need to have personally been on the receiving end, to some extent, to appreciate just how much. That feeling of being left in the dark, not being heard and struggling your way through alone was not lost on me.

The stage does end up looking like a crime scene by the end of proceedings and the snacks offered up at the end of the show is an interesting and disarming touch, especially when rain ponchos come into play and you are sitting front row. The show tackles some serious issues with more than a hint of comedy at times. The comical element rather than make light of the situation adds a lightness. In the end, crime scene and all, it’s our need for a voice that shines through. More important than that, our need for that voice to be heard and taken seriously!

It should be said, this show doesn’t offer any real solutions, although I know from experience laughter really is a great medicine and you get more than a dose with this production. You come away with a strong sense of solidarity and hopefully, in turn, some relief or reprieve knowing you are not alone.