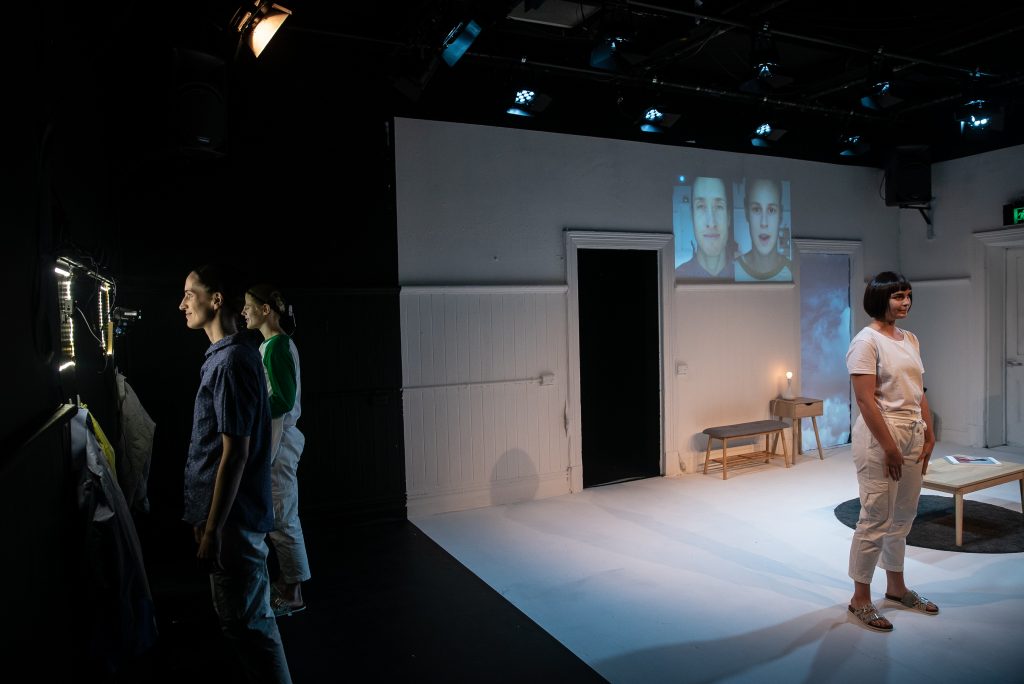 Opening the Blue Room Theatre Season for 2019 is The Double. Written and directed by Clare Testoni, this latest play from Bow & Dagger (Medusa) is a modern age Faustian nightmare that will have you more than questioning your ongoing relationship with technology.

As a struggling actress sells her likeness to a tech giant, her tech double takes a larger than life shape and the actress recognises herself less and less in it. The deal with the devil is sealed, and soon her double appears on every phone, every computer, every screen, everywhere.

The Double came from spending time in Germany in shadow puppetry training; spending time with shadows surrounded by stories of Faust, doppelgangers, and Peter Schlemihl. The idea of meeting yourself of your of double has always intrigued me, as an actress my sense of self has always been rocky and as a woman, I am always made to feel aware that there is a disconnect between the way I am seen and the way I see myself.

We live in an age of the image. In a world where self is curated, and reality is altered to be hyper-real. It seemed to me that those old stories of self, souls and shadows had new meaning in a world of catfishing, Instagram fame and upskirting.  CLARE TESTONI

I know for me, who has been struggling of late living in a fairly digital, social media, selling your soul kind of world where I’m often pigeonholed into my supposed and assumed online persona offline, I found the production nauseatingly captivating. I came away wishing I had one of my fellow online influencer plus one buddies by my side for a debrief over stiff drinks, rather than my hubby for date night, who despite his IT background doesn’t partake in the soul-selling online practices of social media and probably had a different kind of debrief in mind.

The entire play using just three live actors together with two video cameras to one side of the stage, as well as the technology that then gives you an assembly of real and relatable characters is mind-blowing. It’s hard to articulate the full scale of what is served up without spoiling things too much but let me try to set the scene for you.

This is billed as a cyber-gothic nightmare and you’re asked to turn your phones off or set them to flight mode in order for this high-tech production to take flight, hitch free. Even in doing so, I believe the production wasn’t without issue.

You have Victoria the central character centre stage, interacting with her tech double Vici together with a number of people from her ‘real’ life via FaceTime-esque calls. Victoria is played by three actors (Michelle Aitken, Phoebe Sullivan and Amanda Watson) who as well as all taking turns playing Victoria, take on other characters via video – using overlapped or borrowed faces from other actors. The technology, despite time-lapse issues with the live feed, is cleverly done and practically seamless.

I must confess, I initially found the time-lapse issues more than a tad distracting, unsure if this was how the feed was supposed to be or the technology feeding it wasn’t fine-tuned enough. I’ve seen similar live feed technology onstage with another production earlier in the year without the lapse and I believe if these issues could be rectified this would be a 5-star production. In the long run, you’re transfixed by the performance centre stage and the more than believable selling your soul story unfolding before your eyes, which makes the Skype session merely a background prop and far less distracting once you’re completely engrossed in this cyber gothic nightmare.

If time-lapse issues could be rectified this would be a 5-star show. Definitely worth casing before it closes on May 11!