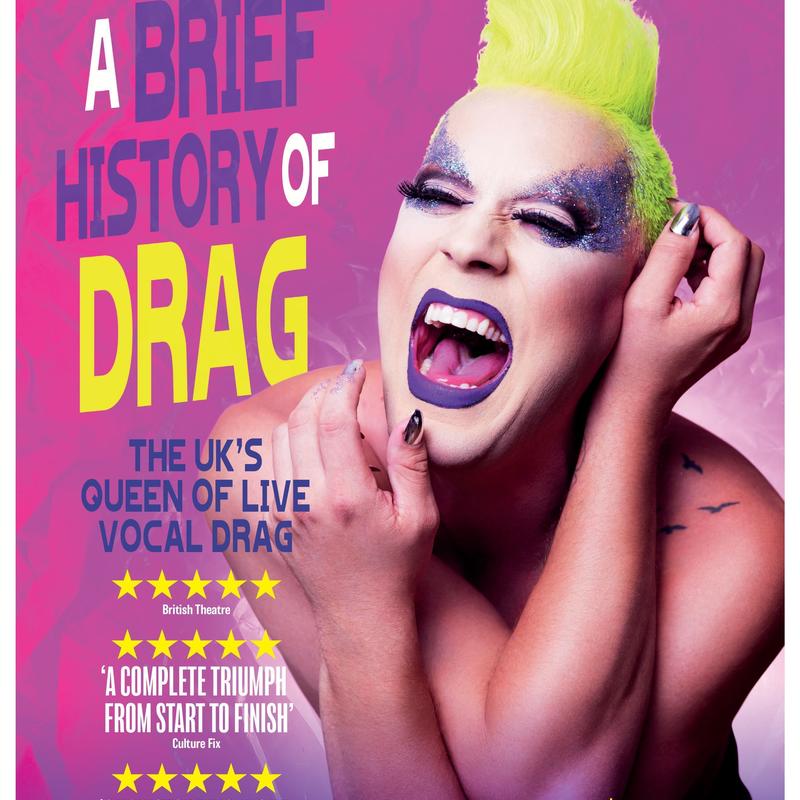 Following a successful UK tour and a smash hit run at the Edinburgh Festival Fringe, Uk’s queen of live vocal drag, Velma Celli is back in Perth for Fringe World 2019 with her showstopping cabaret, A Brief History of Drag.

To bring you up to speed, Velma is the alter-ego of West End star Ian Stroughair. Stroughair has appeared in hit musicals such as Cats and Fame and most recently, received critical acclaim for his portrayal of Angel in Rent.

My absolute favourite show and performer at Fringe World last year, I wasn’t convinced this show would be as good the second time around. Oh boy… even knowing what may or may not be coming… this serving was even more delicious!! AND… (yes it’s a BIG “AND”) that’s despite a couple of rather enthusiastic possibly heavily intoxicated audience members who did their best to laugh (inappropriately), talk and heckle their way through the show. Velma the true professional, handled the over-enthusiastic audience participation element splendidly. Almost making it seem like part of the performance when I know it must have been a real distraction. And what a performance.

Velma takes us on a passionate pilgrimage through some of the best moments in drag history including music, pop culture, film and theatre with songs from The Rocky Horror Picture Show, Hedwig and the Angry Inch, Kinky Boots, David Bowie, RuPaul and more. So much more. Interlocked impressively with stories from drag history, that help to shine a light on some of the political decisions that affected gay culture and historical moments like the infamous Stonewall riots.

Velma’s journey to drag is just as impressive. Having played almost every venue in London including a two-year residency at the Hippodrome Casino in Leicester Square, as well as the legendary Birdland and 54 Below in New York City. Also performing with pop icon Anastasia and musical theatre legends including Ruthie Henshall, Kerry Ellis and Francis Ruffelle, and a recent appearance in the Olivier award-winning circus show, La Soiree.

Highlights of the night? Basically, the whole set. From start to finish.  A Brief History of Drag is such a high energy show that it’s hard not to be dragged (pun intended) along for the wild and wonderful ride. The live band that also feed off Velma’s energy deserve more than a mention especially given the smoke machine that went into overdrive in their direction towards the end but Velma owns the show, the stage and the audience, even the unruly element of the crowd. We were all under Velma’s spell by the end of the night. Truth be told Velma had me the moment she took to the stage. Possibly before.

If I had to play favourites… there was Velma’s powerful rendition of Bowie’s ‘Under Pressure’, the hilarious Diva vocal impersonations (everyone from Cher to Britney) and of course the encore performance which I’m not about to go into specifics because… spoilers.

Thankfully there is no photo or video evidence of me kicking up my heels, doing my best impersonation of Elaine’s questionable dancing moves from Seinfeld, at the end of the show. If there is any evidence, may it self destruct, quickly.

My only gripe, apart from the audience members who needed to learn a little etiquette when it comes to audience participation… the 60-minute show, even running over for a deliciously homegrown encore, just wasn’t long enough. I for one wanted more, more, more and I know for a fact I wasn’t alone in this regard. I could easily front up night after night for this show. If only my Fringe schedule had some wriggle room. With 13 more shows to go for me, it doesn’t.

Thankfully Velma Celli is dishing up a second more intimate and slightly longer show, Equinox, from Monday and it’s on my Fringe list. You can bet your bottom dollar, I’ll be there sitting front and centre with a truckload of glitter on pretending I’m the only one in the audience. Quietly, you should join me!

6 worth casing stars out of 5. YES… that bloody good. Our cringe to fringe meter doesn’t even come into play for this one. GO GRAB YOUR TICKETS NOW!