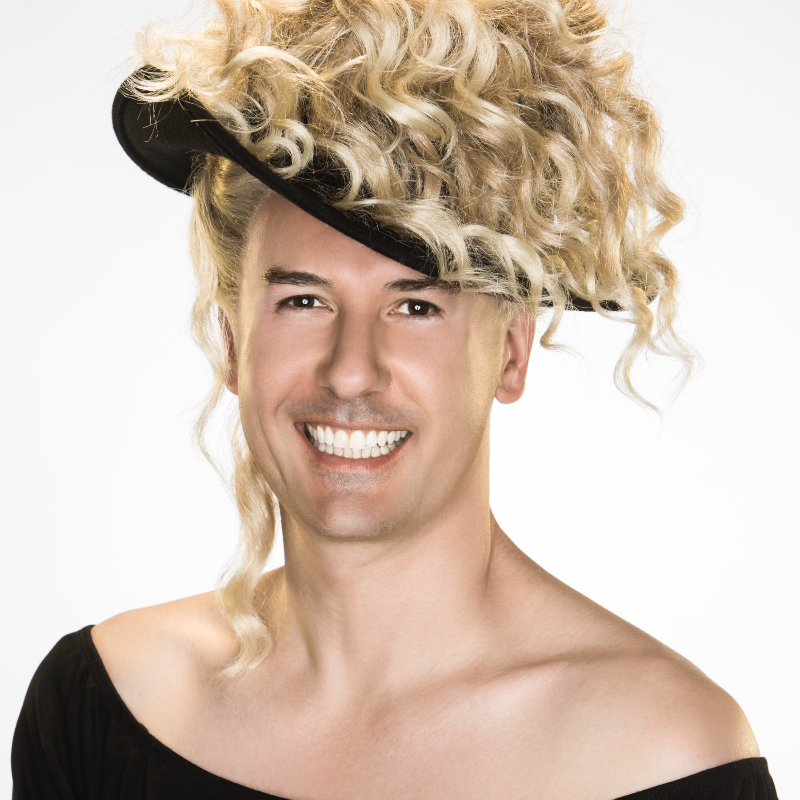 I’m spinning around… Move outta my way… because Michael Griffiths is back in town with his latest show… MICHAEL GRIFFITHS: SONGS BY KYLIE and I was lucky, lucky, lucky to be in the audience on opening night.

More than a tribute show, Michael glides you through the soundtrack of Kylie’s life and loves. It’s a real step back in time and Michael brings a certain charm to the table as well as a wicked sense of humour. You don’t even need to be a Kylie fan but from one Kylie fan to another, it’s going to be a whole lot more fun and relevant if you are. I laughed as much as I loved this show.

I first glimpsed the talents of Michael on piano when he accompanied Amelia Ryan on stage for the hilarious The Breast Is Yet To Come last year at Downstairs at the Maj. This show MICHAEL GRIFFITHS: SONGS BY KYLIE toured shortly after but I was air tripping with Club Jetstar and sadly missed it, so I was super excited to see Michael and this show pop up on my Fringe list.

Michael graduated from the Western Australian Academy of Performing Arts (WAAPA) with a Bachelor in Music Theatre in 1999 and has a Diploma in Music Composition. He won the Helpmann Award for Best Cabaret Performer in 2016 for his Cole Porter tribute and was nominated for a Green Room Award for Best Supporting Actor for his performance as Bob Crewe in Jersey Boys. He has also appeared in Priscilla Queen of the Desert, We Will Rock You! and Shout!

His acclaimed one-man cabaret shows including tributes to Madonna, Annie Lennox and Peter Allen have delighted critics and audiences across every cabaret festival in Australia and beyond to New York, Los Angeles, San Francisco, London, Hong Kong, Christchurch, Auckland and Edinburgh Fringe where he received five-star reviews and standing ovations. I’m not sure if the standing ovation for opening night here in Perth for Fringe World 2019, actually qualifies, given everyone in the room was already up out of their seats singing and dancing. It’s that kind of fun and fabulous show.

Leaving his 4-piece band, that usually accompanies Michael for this show, back in Adelaide and bringing them, so to speak, by way of a backing track enables Michael to keep this Fringe show affordable but still fabulous.

Yes, I’m assuming the show is far more impressive with a live band but Michael’s energy and stage presence are more than enough to justify all the lovers in the room.  His renditions of Can’t get you out of my head and Breathe were heartbreakingly beautiful.  Another two of my favourites saw a little INXS and ABBA come into play briefly adding to the mix.  And what a mix with a disco medley that will have you dancing in your seats.

I could have sung and danced my way through the entire set and would have eagerly taken on the role of Jason Donavan if asked. So yes, there is an element of audience participation and you are encouraged to sing throughout, as well as dance at the end. My Kylie loving, stage shy, plus one for the night (my easily embarrassed middle daughter) had us sitting in the back row and wasn’t so keen for me to be singing, even though it was encouraged. Having said that… my daughter was the first person to stand up and start dancing and singing (really loudly for her) at the end of the night with the rest of the room.

I’d love to say… I wouldn’t change a single thing but there was one thing that would have made this night better for me… removing the uncomfortable fold-up theatre chairs and transforming the entire space into a dance floor and leaving the booths open for anyone (aka us oldies) needing a breather… but then who knows if that might have encouraged things to get a little messy, even for Fringe.

If like me your taste for Kylie songs have evolved over the years and you like to take things a little slow but you’re still inclined to think along the lines of it’s better the devil you know, you will love the CD as much as the show itself. It’s available especially for you to purchase with a quick meet and greet with the star himself at the end of the night.

Now Michael… what do I have to do to get the message through, how can I prove I really love you, love you? Seriously though, if you are prone to taking requests, I’d love, love, love to see you bring a Rick Astley show to life. I’ll be sitting front and centre for that show. A full commitment’s what I’m thinking of.