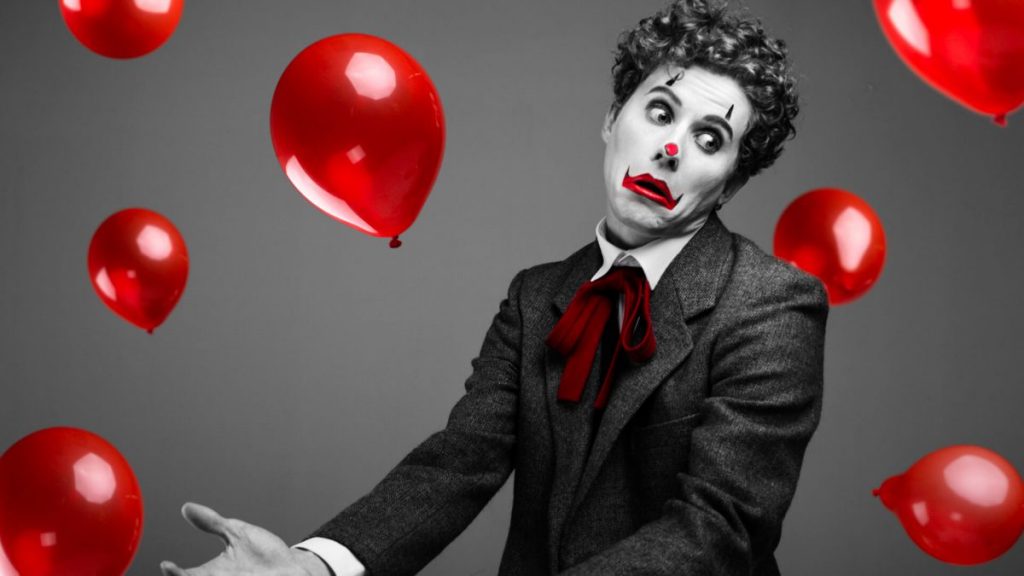 I feel like I’ve hit a hat trick in the Fringe department this year. With three fab shows from three over two nights. No mean feat when there are 700ish shows to choose from over 30 days.  Last night’s two shows were FEMINAH and THE BIG CITY that are part of The Blue Room Theatre Summer Nights.

Every once in a while, you come away from a performance wanting to (as a reviewer) more than write home about it. Last year it was Morgan Owen playing the umpire in COURT MY CROTCH. Who incidentally was also in attendance at both shows. Last night it was very much FEMINAH and Charlotte Otton (you can read my review HERE). Then there was THE BIG CITY…

Joe the Clown has left the safe confines of his small hometown to go to the big city; he’s finally chasing his dream of being a world-famous entertainer! However, Joe runs into some hurdles along the way. Perhaps uniting with his long-lost friend will help him? He just needs to find them first…

Created by Louis Spencer and Kylie Bywaters, THE BIG CITY combines clowning, cabaret, comedy and puppetry into a Pixar-esque bundle of wide-eyed wonder. A whimsical coming of age story for adventurers both big and small, THE BIG CITY examines what it really means to achieve your goals. Spencer takes the audience on an adorable journey with Joe the Clown and all of his loveable shortcomings as we all learn an important lesson about friendship and disappointment.

It’s been a little while between mime-ish shows for me. That’s not to say they aren’t my thing. I rather crave a night of silence and non-verbal communication in the thick of school holiday chaos on the home front (take that as you will). This wasn’t a completely mime or silent show though. No dialogue, so to speak, unless you count the songs. The majority of the storytelling is achieved through not only a great performance on Spencer’s part but also the music, sound effects, visuals and simple props together with Bywaters who brings the magical puppetry to life and plays several cameo parts along the way.

The puppetry aspect of the show (when I could see it) was absolutely mesmerising but I really did have a couple issues with this production as a whole. With so much preparation and process having gone into the show, I was disappointed that more thought didn’t go into the audience perspective, especially anyone not sitting in the front two rows, given the space.

Both the puppetry and performances low to the ground were near impossible to see at times, even with one craning their neck and shifting so far forward in the seat. When the puppetry took to higher ground by way of the props (chair/suitcase) later in the show, it became clear the magical performance we’d missed earlier on. Thankfully though, this limited view was only within a small part of the show and the audience like myself were fairly forgiving, given Spencer’s moving performance and the round of applause at the end of the night.

On that note, I didn’t laugh as hard as a lot of the audience. That isn’t to say this show didn’t tickle my fancy. Far from it. I suspect on opening night friends and family were in attendance and their overly amused state of play came from another perspective than mine.

To me, the show was equally sad and touching, as it was funny. It’s another show that is definitely worth casing at Fringe World this year but if you do end up going, I’d recommend sitting front and centre.