MEDUSA is an immersive, theatrical experience that says time’s up on sexual assault through this bold re-telling of the Medusa tale from Greek mythology. 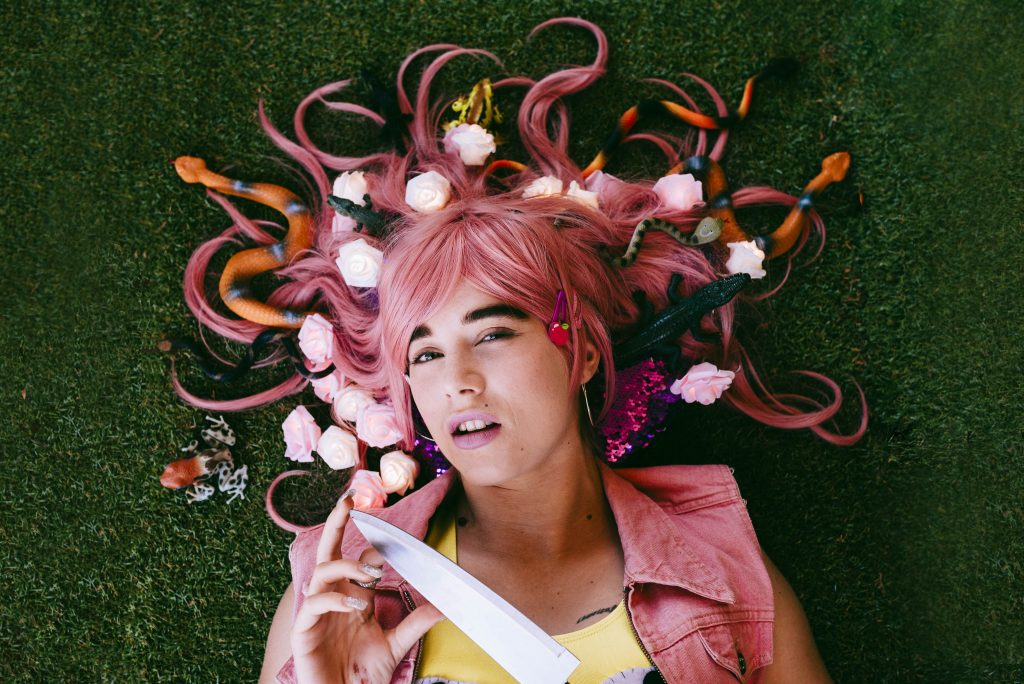 With no seating, The Blue Room Theatre is transformed into a pumping, sweaty nightclub as the story of Medusa is retold to reflect the modern horror that women face when it comes to gaslighting, sexual harassment, and sexual assault.

“After the public and private purging that occurred as part of the #metoo movement, I wanted to make something that continues the conversation and carries it towards a place of solidarity and empowerment,” O’Branagáin says.

“I’m sick of feeling unsafe as I walk down the street at night. I want to feel strong and powerful.

I want women of all ages and backgrounds to feel this way. I wanted to make a movement that would support this in a way that is radical and unifying and fun and fierce.”

Featuring a cast of fierce warrior women, MEDUSA is an immersive experience of ritual, togetherness, sacrifice, and empowerment – not a play but a provocation for women to take to the streets and reclaim their spaces.

SACRIFICE YOUR INHIBITIONS AND JOIN US?

I must confess, I was a little anxious when the reminder for this show arrived in my inbox with a list of warnings.

Some very important notes on the performance.

I didn’t give much thought to leaving my inhibitions at the door for this show. Out of all the things that could have made me anxious in terms of warnings, it was the ‘don’t dress fancy’ that did me in. Having just donated and thrown 80% of my wardrobe, there wasn’t much left apart from designer wear and I wasn’t exactly prepared to put any of my Jessica Bratich bags or my Jonte Designs coats on the line. Potentially naked paint gods or not.

I briefly contemplated a crime scene suit or a trip to Bunnings for protective clothing. In the end, I opted for a couple of pieces I picked up in the sales for my birthday from Rivers. Worst case, I could toss them and hope they were still in stock and on sale or I could find something similar to replace them.

Ironically, all the time and energy I spent stressing in the outfit department were unfounded and my time would have been better spent brushing up on my Greek mythology. Yes, there was paint and nudity in close proximity. There was also a point where the entire audience was asked to sit on the floor. I, like everyone else in the audience, surprisingly came away squeaky clean considering… well as far as my outfit was concerned.

There were times during the performance where I felt like we were part of a crime scene and having the audience in crime scene suits might have actually led to a different more interactive experience. I suppose it depends on the audience on the night and how receptive they are. There were other times, where I wanted to sacrifice my outfit to the paint gods, join in on the ritual and get a little, fully clothed, dirty myself.

The audience is encouraged before entering to respectfully immerse themselves in the performance by moving and shouting. While there was audience movement throughout last night’s show, it was generally prompted by the performers when they required a space to be cleared for the safety of the audience and their performance. As it was, the audience members were generally glued to the walls playing witness to what was unfolding before them, much like wallflowers.

How do you solve a problem like… Medusa? Before you even question if Medusa is actually a problem, you give Medusa her head back! Which is exactly what writer Finn O’Branagáin, has done with this powerful and poignant work of art!

The work had its genesis through simultaneously reading Ovid’s Metamorphosis (realising Medusa was a sexual assault victim) and a number of articles that revealed women over 50 are most at risk of homelessness. Although disparate, they collided in my head in a unifying thought that both women who are homeless and women who have been victims of sexual assault have something that turns people to stone and you have to turn your heart to stone to keep walking by them, or to say they are liars. Both groups have something in their situation that makes people want to say “they must have done something to deserve this” Also, the dichotomy of women having hyper visibility when young and invisibility when old.

The original idea for the work was a one-woman show of Medusa as an elderly homeless woman, however this changed when my research found many representations of Medusa and her severed head. She was demoted from a goddess and a queen to a monster, she has been a symbol of the dangers of being too good looking, male castrations, the hypnotism of beauty, degraded beauty, the dangers of a powerful woman, and how monstrous women are in general. I wanted to give her back to women as a goddess. To give Medusa her head back.  Finn O’Branagáin

For me, eyes wide shut springs to mind here and I’m tempted to return for seconds for this thought-provoking show. There’s so much to take in across two rooms. So much going on, so much noise, so many messages… I wonder if I’ve missed something. I wonder if a second helping, that’s followed by a Q&A with the cast (Oct 24), might be even more inciteful, opening my eyes and mind a little wider in the process.

I suspect my take away from this work will be different from most. I guess I’m of that invisible older generation (but thankfully not homeless) that walks away from this wondering if the level of nudity was necessary and how flashing our boobs and/or getting naked in public actually empowers women.

At the end of the day though, that level of exposure does send a powerful message. Is it actually empowering? Can we not send the same message fully or even modestly dressed? Can we ever expect to feel safe walking naked down the road? Can we ever expect to feel safe fully clothed? Do men have these same issues? Is my generation and way of thinking part of the problem?

What if like the lack of clothing in this performance, we removed all the pre-conceived narratives, notions and rules that have been layered upon us over the years? You only have to look at the anxiety attached to my outfit prep for this show (and most events if I’m completely honest) to appreciate I really need a new narrative and way of looking at life.

If you can leave your inhibitions at the stage door, you don’t mind a bit of nudity and you love performance art, you will love this show. I know for me, I was still digesting the narrative the morning after and I’m keen to head back for seconds. Although, perhaps with a comfy floor cushion and a crime scene suit this time around.