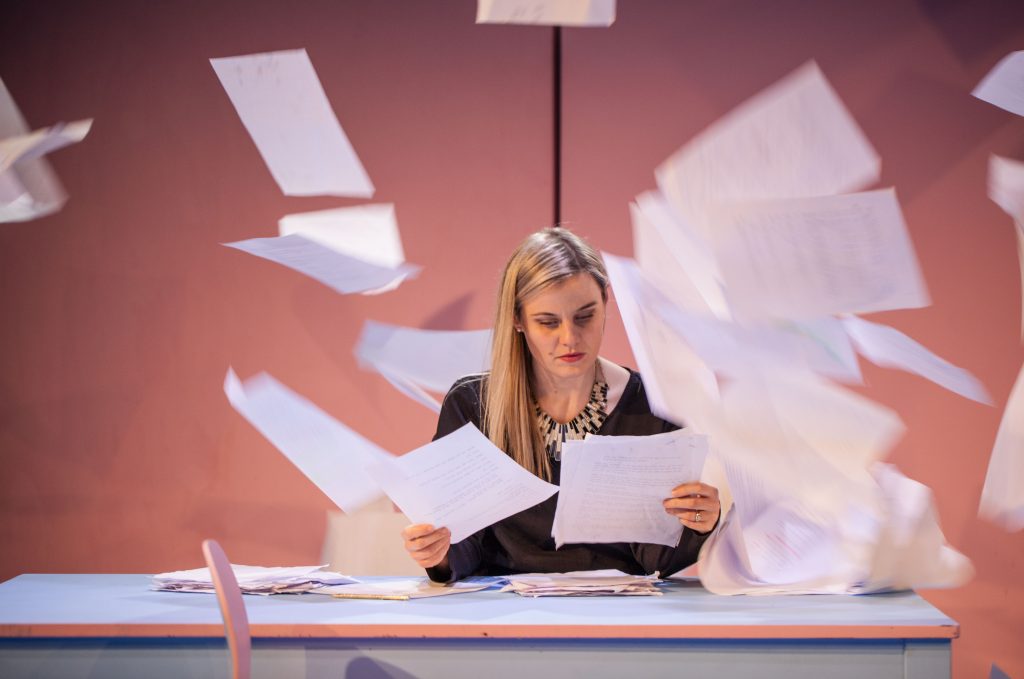 Corruption, power and control with a huge amount of time relevant influence thrown into the mix. Threshold is a politically charged play now showing nightly at The Blue Room Theatre until August 25.

Written by James Palm (Pay Attention, Boy Story) and directed by Bridget Le May (Alone Outside, EDGE, Sudden Skies), this fast-paced drama, set in Sydney in 2016 when journalists have been banned from Nauru detention centre for three years, shines the spotlight on the dark side of politics, journalism and power.

Filled with humour and often ugly truths Threshold throws open the curtains on corruption, cover-ups and the harsh game of politics. We get a ringside glimpse of who is pulling the strings and the corruptive relationship between politics and media, highlighting why the public isn’t always privy to the real story.

“Threshold asks a lot of uncomfortable questions; not just of the political system but also its audience. How accountable are we for the state of our discourse? The immigration debate is a microcosm of the division within Australia, and ahead of a looming federal election, I think audiences are ready to have the discussion.” – James Palm, Writer

While the play is unnerving in part, it’s a case of subject matter. There is no audience participation, it’s more than safe to sit front and centre. Although given the intimate set, where you enter and cross the stage to your seat, it’s hard not to feel part of the play, even in the back row.

Within minutes of everyone being seated, the door you just walked through becomes part of the show. Which means there’s no chance of escape, a quick toilet break or entry if you are late for that matter. Not that you want to escape. The scene is set and your interest in the four characters unfolds from the moment they walk on set, wine glasses in hand. Given audience members are allowed to bring their drinks with them into the theatre, it would be easy to think at first the four actors were well-dressed latecomers.

The nature of the dialogue between the characters and the fast pace of the show, even between set changes, means you’re completely engaged. The set itself is simplistic in design but cleverly effective evolving from an event space with free-flowing bar to an office, then a bedroom (or two) and back again, all in the blink of an eye.

The only real negative in my eyes… isn’t to do with the production at all, more a theatre policy with regards to bringing drinks into the theatre. While I don’t have an issue with enjoying a glass of wine while watching the show, in all my years of theatre-going, apart from cabaret-style where you are seated at a table, I’ve never witnessed audience members with wine bottles, pouring themselves rather loud and awkward top ups throughout the show. It was a slight distraction at times if you were sitting in close proximity, in a 65ish minute show where you don’t want to be distracted. At other times it almost seemed to fit in with the play.

Due to the political nature of the production, this play isn’t going to be for everyone but even if the subject matter isn’t your cup of tea, you can’t fault the quality performances from all four actors, the clever set design and the powerful indictment that has us questioning how we look at journalism and politics in today’s influencer led social-media landscape.

This production was definitely for me though and I’ve given Threshold 4.5 worth casing stars out of 5.

PRESENTED BY THE BLUE ROOM THEATRE & THE BOSTON CURSE

Managing Editor at Agent Mystery Case
Follow Raychael aka Mystery Case on her mystery adventures 'casing' people, products and places to bring you her worth casing favourites.
We were gifted tickets for review for this show. As you would know by now gifted tickets or sponsored posts don’t impact my ability to tell it like it really is. There’s no one pulling my strings around here… just the way it should be!