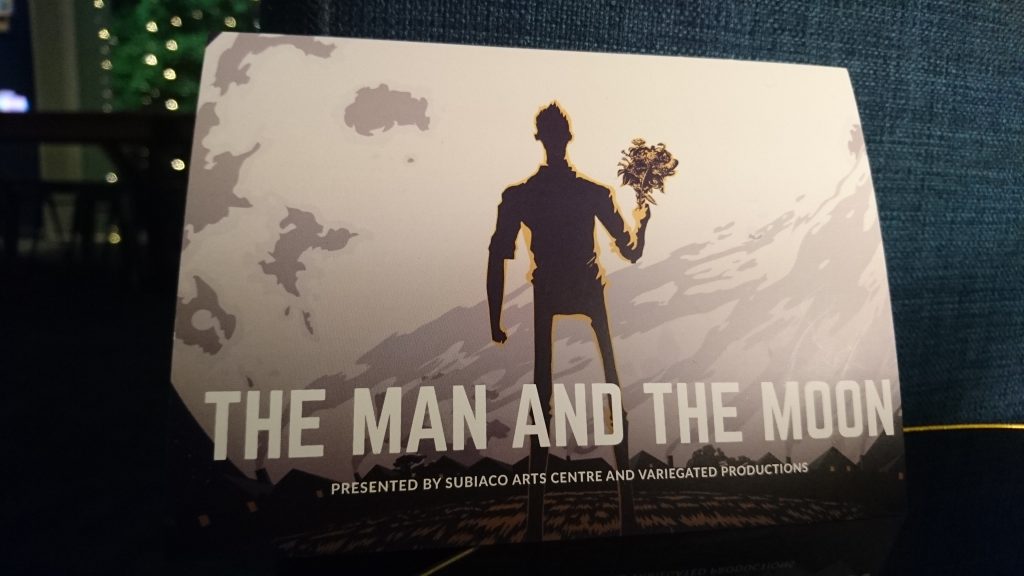 THE MAN AND THE MOON

Following a successful sold out season, The Man and The Moon landed on stage this month as part of the annual Subiaco Theatre Festival at Subiaco Arts Centre. Back apparently bigger and better than ever with a newly released soundtrack to boot.

I completely missed the show when it was nominated for a Martin Sims Award for Best New West Australian Show at Fringe World (2016). I almost missed it this time as well because I’ve been busy playing a game of catch up with back to back gigs following our mystery adventures in Singapore and while I would have liked to have been in the audience for opening night Wednesday, Friday (the second last night of this particular show in the festival) was our one and only chance to see for ourselves what everyone else was raving about.

The Man and The Moon is one man’s journey of self-discovery through earth-bending unrequited love, with live and original jazz, evocative lyrics and an interesting mix of humour that had most of the audience (including myself) laughing and nodding along for the entire show.

Starring the talented St John Cowcher (Laika, My Robot, The Adventures of Alvin Sputnik), who returns to play The Man after touring and featuring music by Brett Smith (Elephants, Venus in Fur), this is an innovative one-man band (accompanied by a 3-piece live jazz band) style of cabaret theatre. 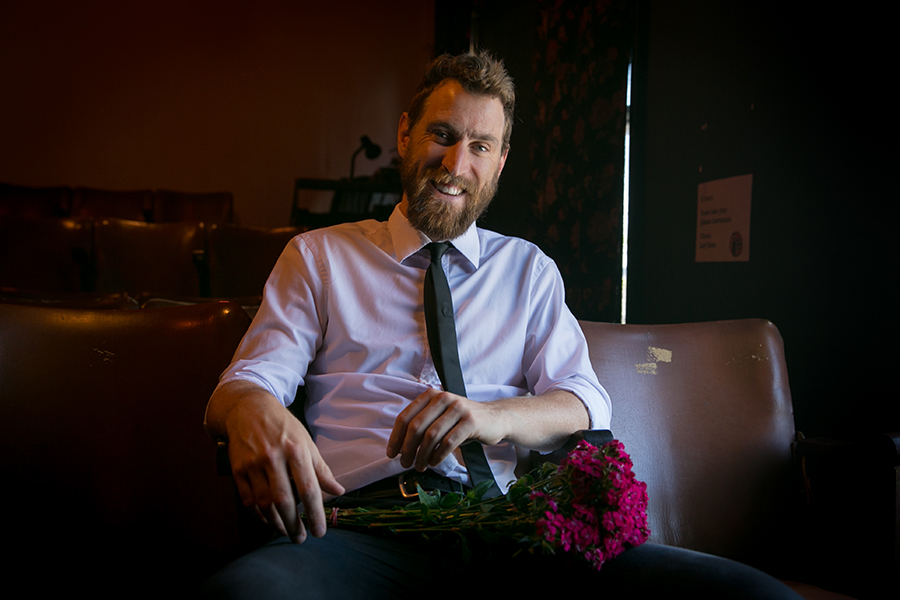 You’re welcomed into the studio and to your seat via the stage, with the live band in full smoky, New York jazz bar, swing. With Cowcher the star of the show sitting waiting in the wings with his back to the audience. Even with his back turned, Cowcher has an interesting stage presence about him. A presence that doesn’t let up from start to finish throughout his flawless performance. Just how it should be.

It’s this style of performance and stage presence that means there isn’t a lull or dull moment. Although, I found myself on more than one occasion wishing for a momentary lull, so I could fully drink in the jazz performers visually, who do in many ways form a big part of painting the whole picture for this production, even if they are merely props of the production blending for the most part into the background.

“It’ll make you smile and break your heart in equal measure and leave you whistling the tunes on the way out. Plus, the moon!” said St John Cowcher, writer and performer.

I’m not sure my heart was broken in equal measures here compared to how much I smiled (and laughed) throughout this show but I must confess, I’m a huge jazz fan and I’ve been married to the love of my life for 22 years (feels like 50 – see below), which probably has some bearing on my ability to resonate with unrequited love.

I was however, rather annoyed when  hubby, my chosen plus one for the evening, decided to race out the door after Cowcher left the stage, dragging me with him (so we could get to another engagement) rather than hang back and continue to listen to the tunes and soak up the atmosphere. I honestly could have stayed all night!

COMPLETE LUNACY OR TOTAL ECLIPSE OF THE HEART?

I’m giving the show 4.9 worth casing stars out of 5. YES… that good! Go grab tickets NOW for closing night… tonight because I’m not sure when or if this show will be back in town.

If you are a jazz fan, like myself, I would suggest you cash up and purchase the soundtrack on your way out for $10!

So… what would have made me hand over that last .1? A different more cabaret or piano bar style setting, one where you sit at tables and sip expensive red wine while you watch the show. Then once finished, you continue sitting and sipping while continuing to inhale the dulcet tones of the 3-piece jazz band, as you fully digest the witty lunacy of the production. Having said all that though, I absolutely love the set up and vibe at Subiaco Arts Centre.

I’m relatively new to this festival but fast becoming a regular fan of anything that comes out of the Subiaco Arts Centre and brings independent art and its fans out in Winter in Perth. There’s generally always something on the SAC menu that will make for an interesting date night with or without hubby.

The venue and quality calibre of shows on offer, have this way of transporting us back to the 90s. A time when we were first dating in Sydney and thanks to my work at the time, hitting the theatre every other week. Innovating shows like, Andrew Bovell’s Speaking in Tongues at the Stables Theatre in the Cross and Table for One at the Ensemble Theatre starring Sonia Todd.

Everything we’ve seen to date out of the Subiaco Arts Centre, including Masterclass with Amanda Muggleton and The Man and The Moon last night, compares with that calibre of show and performance. Innovating, exciting, definitely worth casing and writing home about!

During the festival it’s worth heading in early to case the pre-show cocktail specials for $12 or the antipasto share platter that arrives on its own for $16 or with two cocktails for just $35. Go the cocktails. Always case the cocktails! 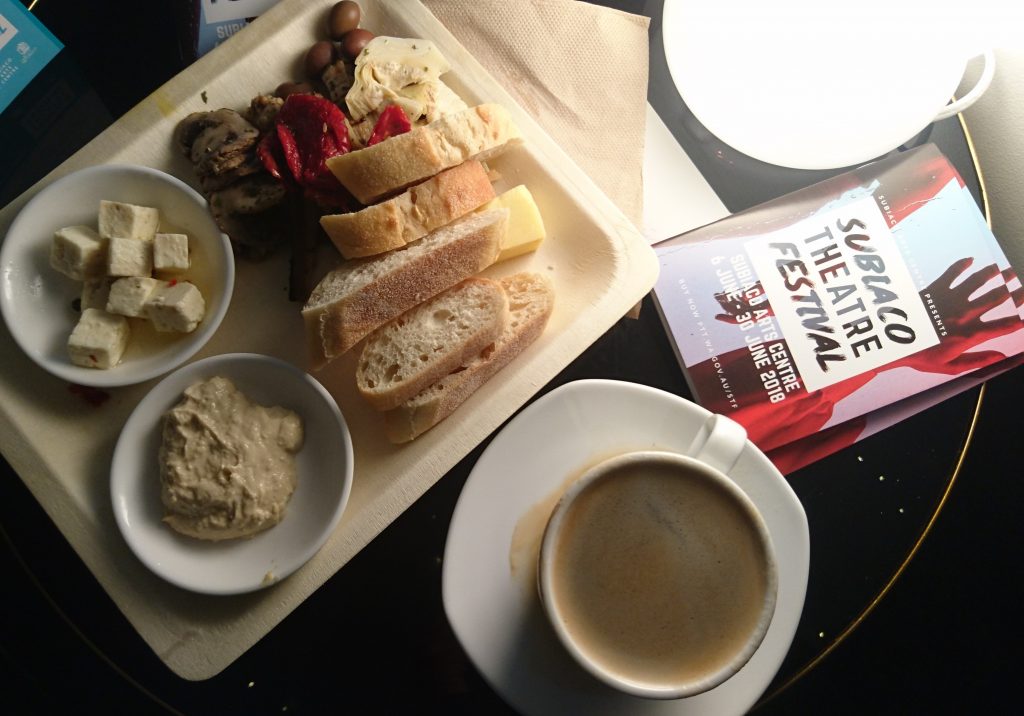 We were gifted tickets for review purposes. As you well know by now, gifted tickets and sponsored posts have no influence on my ability to tell it like it really is or hide the fact I have a chronic and what I believe is an inherited condition known as foot-in-mouth disease.

Which brings me to the matter of my coffee that was served with a generous splashing on the saucer (even before hubby splashed it some more) and didn’t come close to my favourite Karvan Coffee. Not that I should or would hold a coffee brand against anyone apart from my in-laws who have a thing for instant, International Roast.