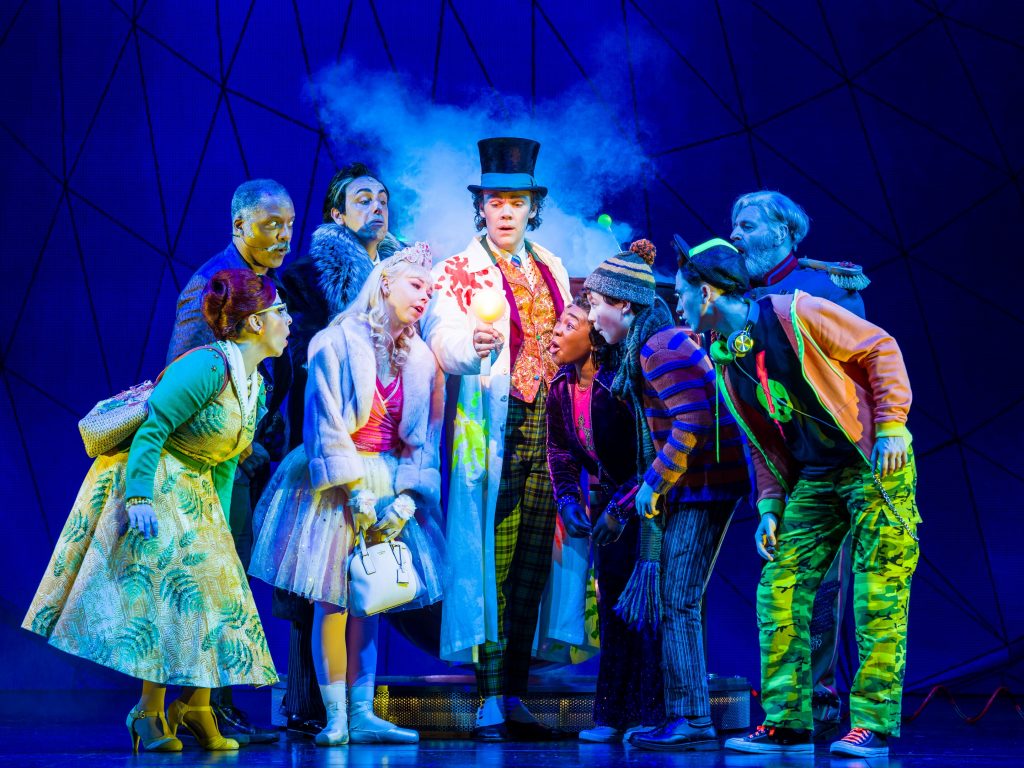 Your Golden Ticket to a Good Time!

Having grown up loving the children’s book by the same name, it’s hard to imagine anyone not familiar with this classic tale. In a nutshell for those bad nuts not in the know, the story follows Charlie Bucket, a poor boy who lives with his mother and four ailing grandparents and their daily struggles getting by on next to nothing. Charlie loves to invent, is obsessed with Wonka chocolate and dreams of a better life for his family.

From his dark and dreary everyday existence we follow Charlie’s dream of a lifetime adventure when the Wonka factory reopens after a decade long closure with a Golden Ticket giveaway. With Charlie winning the last remaining golden ticket he joins four other lucky children who embark on a magical tour of the Wonka Chocolate Factory and we get to step inside a world of pure imagination.

In a modern day reality TV world, this would see Celebrity Apprentice dropped onto Survivor Island with an MKR influencer posing as a chef serving up a suspicious looking mushroom dish, with camera in hand, waiting for the magic to organically happen.With the team from The Block throwing any rules straight out the window, all the while building something ahead of its time, with almost no one living to tell the tale. Yes, pure and utter madness from start to finish.

In terms of musicals and live theatre, Charlie and the Chocolate Factory is everything you’d expect and more. So much more. Opening night, for me, was like being a kid in the biggest and best candy store in all the land.

The Candy Man Can…

Leading us into the wild and wonderful is the deliciously engaging Stephen Anderson as the candy man aka Willy Wonka. Playing the role to absolute perfection, on opening night there were a couple of moments where Anderson cuts a glimpse to the audience, who are in hysterics, appearing to find it hard not to laugh along. He recovers well. The audience keep laughing. There’s a whole lot of laughs with this musical.

While this production is ultimately based on a children’s tale and in keeping with the best-selling book, the musical does push the comic limits on stage. It makes for one hell of a mad and magical ride for young and old. Having said that, what might be hilarious to read on a page for some could be more confronting, as an in your face visual, for little ones who might not realise the body swaps for dummies elements at play.

All the golden ticket winners and their parents pull off their larger than life characters impeccably with Augustus Gloop (Jaxon Graham Wilson) and his sausage totting uproarious mother (Octavia Barron Martin) leading the charge. As to be expected certain characters meet their demise in hilarious form with the more modern (still gum popping) Insta pop princess Violet Beauregard (Tarisai Vushe) actually blowing up after eating one of Wonka’s blueberry confectionery inventions and the larger than life evil looking squirrels pulling bad nut Russian ballerina Veruca Salt (Karina Russell) to pieces. Even more convincing is when they shrink Mike Teavee (Taylor Scanlan) inside a television set.

Which brings me to the last golden ticket winner Charlie played brilliantly by Flynn Nowlan on opening night with the role shared with Charlie Dunn, Phineaus Knickerbocker and Cooper Matthews during this run. One of my favourite performances from the night was Nowlan and Anderson in the elevator scene towards the end.

I was completely captivated by Lucy Maunder’s exceptional performance as Charlie’s mother, Mrs. Bucket. I may have had mixed emotions with Maunder’s Aussie accent but her vocals were sublime, reminding me of Rachael Beck at times. It’s easy to see why Maunder was nominated for a 2019 Helpmann Award for Best Supporting Actress for the same role.

The ensemble play multiple roles throughout including the most impressive line-up of Oompa Loompas. All helping to serve up this timeless tale in such a fun and fabulous way that you could easily leave the theatre feeling like you’d won the golden ticket.

For those of us sitting in close proximity to the front of the stage, it’s also possible you took home more than you bargained for with confetti cannons going off with an almighty bang at the end of proceedings.

In the end, covered head to toe in gloriously oversized confetti (secretly wishing it was raining chocolate bars) I didn’t want this show to end. Charlie and the Chocolate Factory had me wanting to dive right into a vat of chocolate or heading straight to an old fashioned corner candy store, as well as booking tickets for a return visit before the show closes at the end of the month.

CHARLIE AND THE CHOCOLATE FACTORY

Managing Editor at Agent Mystery Case
Follow Raychael aka Mystery Case on her mystery adventures 'casing' people, products and places to bring you her worth casing favourites.
Just a quick reminder that I’m only doing limited outings while I continue time out to focus on health issues and a kick ass bucket list. During this time we are taking a break from socials and limiting our editorials.

Our Worth Casing Newsletter will continue to hit your inbox monthly packed full of our picks for local events, live shows, films and more. This month, we’ve found Perth’s best value high tea. With free flowing tea/coffee, incredibly friendly service and under $20 per person… what more could you want?