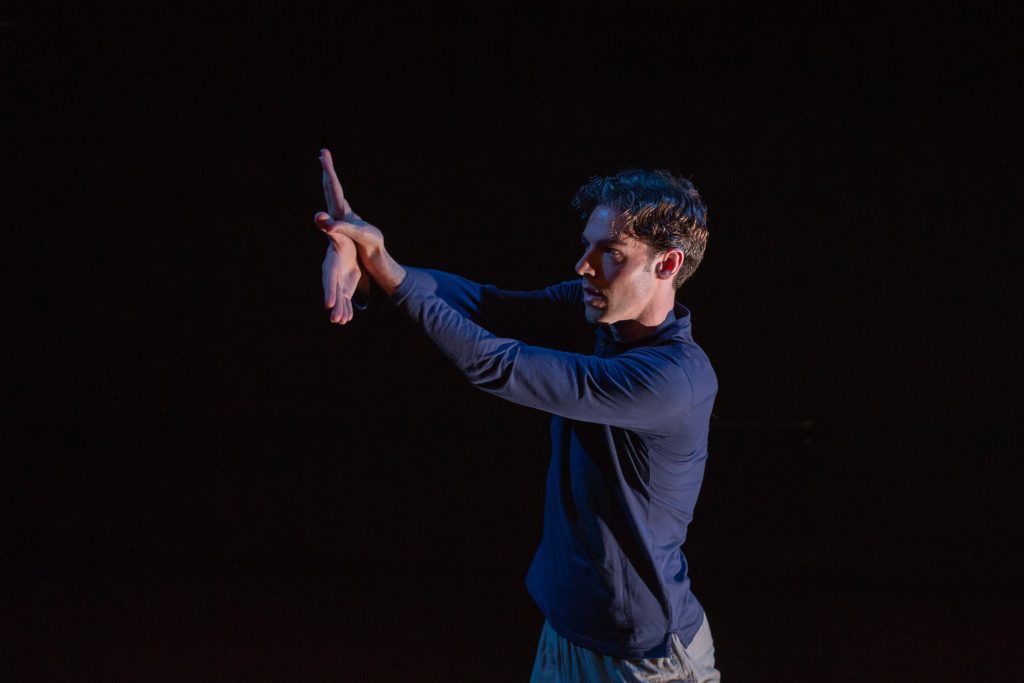 Mime is as old as the hills and generally, when thrown around, conjures up a stereotype that includes clowns and painted white faces but last night at The Blue Room Theatre, it was a whole lot more with ICARUS, the latest offering from Christopher Samuel Carroll.

Drawing from the hundreds of reported cases of those who have taken the ultimate leap of faith, stowing away in the landing gear of planes in a desperate attempt to escape intolerable conditions of conflict, disaster and oppression.  ICARUS is a dark, mesmerising and almost hypnotising one-man physical odyssey that follows a refugee’s epic journey to search for safety. There’s not a clown or a painted face in sight.

There aren’t many times you can tell someone ‘You say it best when you say nothing at all’ without potentially serving it up as a back-handed compliment but last night was one of those times. Carroll takes mime to another level completely and I for one was completely transfixed.

Given I wasn’t privy to Carroll’s earlier more wordy solo-performances, this being his fourth solo show, I’m not in a position to compare what has gone before but if last night’s ICARUS was anything to go by, I’m wishing I could jump back in time.

Impressively the only props were Carroll himself together with a dynamic soundscape of sound effects by award-winning sound designer Kimmo Vennonen.

A solo show can be the ultimate challenge for an actor, striving to hold an audience’s attention for an hour or longer by any means – so why make it more difficult for yourself by stripping away the right to speak? For physical-theatre virtuoso, Carroll, who brings his whimsical modernisation of the Icarus myth to The Blue Room Theatre this week, less is most definitely more:

“Icarus will be my fourth one-man show, and believe it or not, the previous three were actually very wordy! For this story though, I wanted the main character to be an ‘everyman’ who could be from any country or any background, depending on the audience’s own points of reference. I also wanted to invite the audience into a very intimate relationship with the character, and experience this epic journey along with him. Some of the most profound moments in life are when the emotions are so huge, there are no words that can be said – and yet, seeing someone experiencing that, we instinctively understand what they’re going through.”

When you look at the mythical, where Icarus and his father attempt to escape from Crete by means of wings and then at the Icarus dished up so brilliantly here, with Carroll’s performance impressively interlocking the myth with a contemporary modernism through the journey and struggles of the refugee, it’s hard not to be moved and somewhat emotionally exhausted by the end of this show. A true testament to Carroll’s performance given the lack of dialogue.

An impressive piece of performance art that literally, figuratively and mythically takes flight and pretty much takes you with it for the entire 55 minutes. 4 worth casing stars out of 5… although we are doing our cringe to fringe meter for all of Fringe (see below).

Icarus premieres at The Blue Room Theatre Summer Nights as part of FRINGE WORLD 2019 from now until February 2, before a season at The Street Theatre in Canberra.

Now showing at The Blue Room Theatre until February 2nd