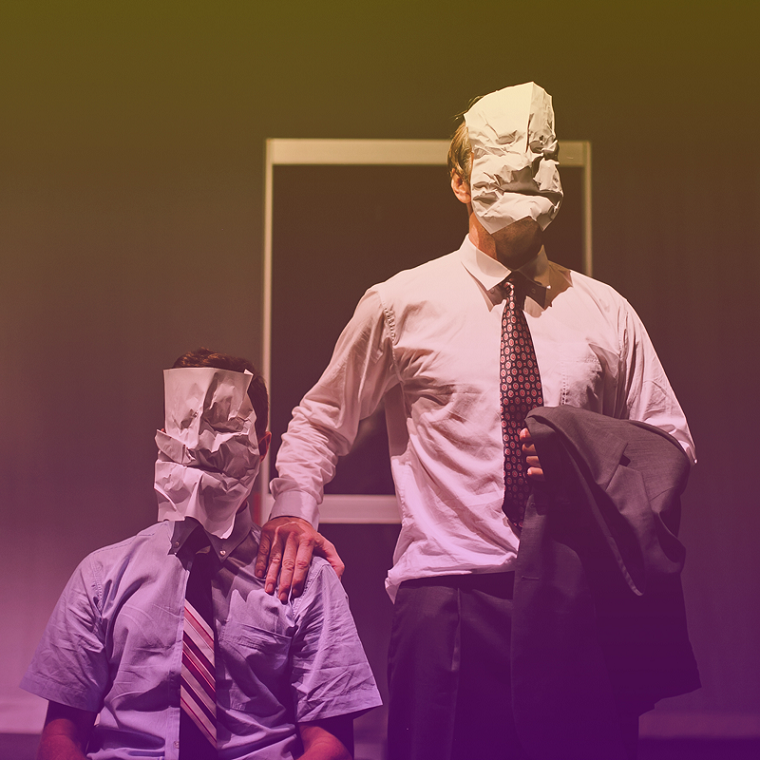 Two blokes in an office: one older, one younger. A cross between The Office and a cage fight, Cockfight is a game of comical one-upmanship that builds to moments of emotive impact, where generational truths are exposed and unpacked.

A flash of bared teeth, territorial pissing contests, the desperation of needing to prove yourself versus the need to hold on to what you’ve got.  Cockfight explores the power play between men, the frailty of the ageing body and questions our culture’s desperate struggle for achievement.

Being on the wrong side of the generational ‘office’ divide myself and living in a social media world where the young and neatly packaged seem to be rewarded the most, I found the performance and the underlying message that came with it, depressingly beautiful. The dark humour that came out to play stung like an open wound or a slap to the face and I didn’t find myself laughing out loud as much as the truly invested younger audience members.

The choreography, especially during the slo-mo fight scenes, was exceptional. Slowing the pace a little, so us oldies in the audience had time to digest the harsh reality that was unfolding in front of us. I may have left the theatre feeling a little more frail and a whole lot older than when I first walked in.

Much like the two performers, I felt like I’d gone a few rounds and some, both physically and mentally after the show. Rather than race out of the theatre and hit the bar to discuss the show over a stiff drink, I found myself craving an empty theatre and time on my hands to debrief.

I’m awarding Cockfight 4 out of 5 worth casing stars. It’s not often a performance unsettles and impresses me in equal measures.

Cockfight is part of the MoveMe Festival now in its second week and running until 22 September.  MoveMe Festival 2018 offers opportunities to dip your toe in, take a paddle, or dive into dance that is everything from captivating and thoughtful to unashamedly hilarious and exhilarating.

You can take full advantage of the great splash of contemporary dance on offer with MoveThree – a 10% discount offer when you purchase tickets to three or more festival shows. Also look out for the fabulous program of free events during the festival. There’s a little something for just about everyone. Even us oldies it would seem… having said that, I’m really not that old. Promise.

Managing Editor at Agent Mystery Case
Follow Raychael aka Mystery Case on her mystery adventures 'casing' people, products and places to bring you her worth casing favourites.
We were gifted tickets for opening night for review purposes. As you would know by now, gifted tickets and sponsored posts do not impact my ability to tell it like it really is or my inability to laugh out loud when everyone else is.