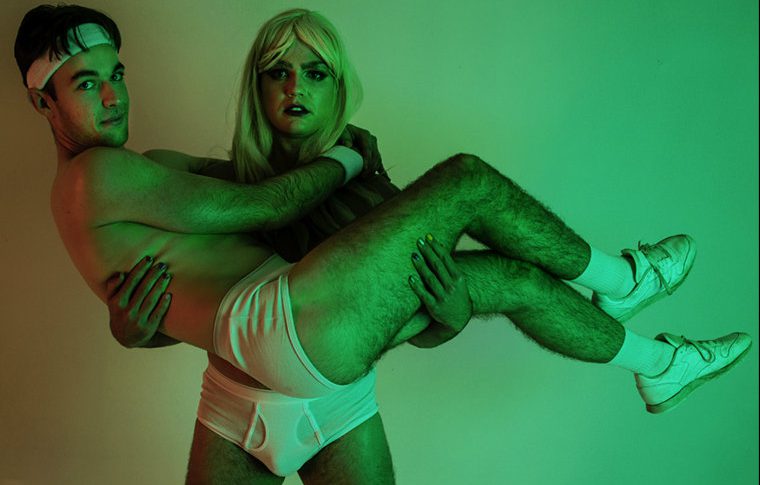 Tennis meets drag in this high octane, high spectacle performance investigating the toxicity of sporting and drag culture. Two elite bodies compete under the strict gaze of an umpire. Each presents a facade, each pushes against prejudice. Who can flaunt their way to victory first?!

From FUGUE, the company that brought you Arteries by Ancestry comes a new competition of fierce backhands and ferocious song and dance. Born directly from Australian stories and interviews, Court My Crotch is an uncompromising look at our society’s current relationship towards gender and sexuality.

Court My Crotch was literally reeking of testosterone as we sat courtside on Saturday night. So much so, that at some points, especially when two super white Y-front packages were in full flight and basically eye level, I struggled to know where to look and questioned my decision to sit front row for a better view.

By the time the show finished, I was that invested, my fenced front row seat wasn’t nearly close enough. Let me paint a picture for you… 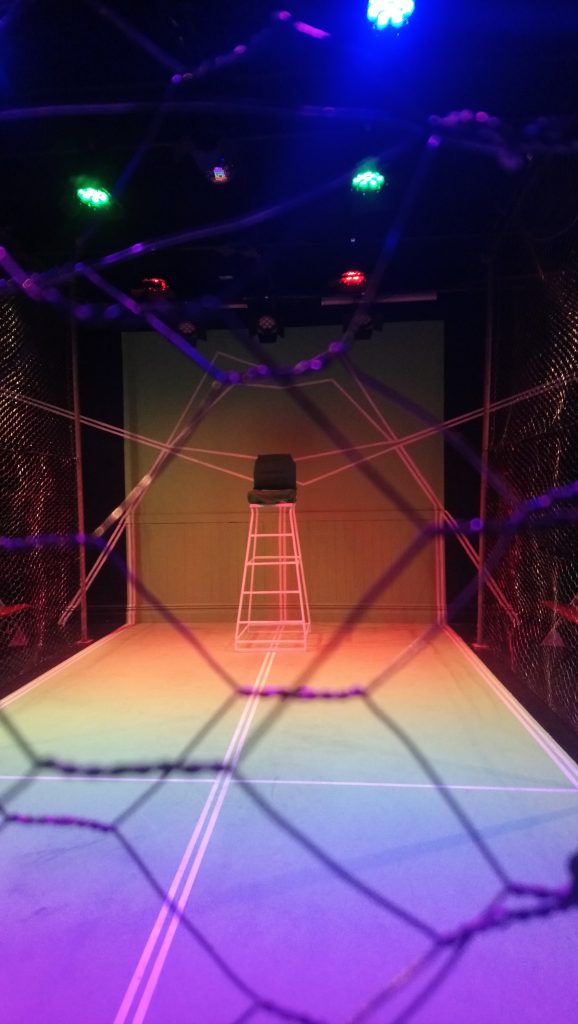 The stage is basically a scaled-down tennis court, that includes an impressive wire fence/cage with a single umpire chair (with umpire already in place) and two rows of spectator aka audience seats on each side of the court.

You arrive on stage, taking your seat courtside and the door you entered through becomes part of the set. There’s no escape at this point with the show starting almost instantaneously. Well if you do manage to escape, there’s no way back in. Not that anyone on Saturday evening wanted to escape.

This thought-provoking, evocative production now showing at The Blue Room Theatre in Perth until Oct 6, isn’t going to be for everyone but in all my 30ish years* of theatre going, I can honestly say Court My Crotch is so cleverly written and executed, it’s without a doubt one of the most interesting shows I’ve ever seen.

And I’ve seen a lot over the years… especially in Sydney when we first started dating in the 90s, with my work at the time sponsoring the arts in a big way. We were in the thick of the Sydney art and theatre scene every other week and privy to some incredible productions during this time. We witnessed a lot of talented actors perform on stage before they went on to become big stars. You just knew at the time going on that one impressive performance, they were destined for greatness.

I believe that’s what we’ve witnessed here, with Morgan Owen who plays the role of umpire. That’s not to say that the umpire takes away from the other performers or that anyone is a stand-out performer. All three performers play their parts exceptionally well, their combined chemistry and the intimate stage layout works to make you feel part of the performance without any real audience participation required.

I just found Owen’s performance truly intoxicating. So much so, that I’m seriously considering clearing my full schedule and leaving my review cap at home to head back for seconds with this one. Giving me a chance to perhaps inhale less of the testosterone flying around and more of the umpire, now that I know what’s coming.

Speaking testosterone… Ash Traylia and David Mitchell both serve up dynamic, high energy and completely convincing performances. Ash Traylia’s performance so convincing, I wasn’t surprised to learn after the fact of her drag queen history.

No, there was no literal debriefing aka nudity in this production. Yes, there was a brief moment where the Y-front briefs came out to play. The real debriefing (speaking figuratively now) happened over a few drinks, directly after the show.

Hubby was my plus one on this occasion and probably didn’t come away loving the show as much as I did but he was more than impressed, to say the least. We both walked away with different takes on the show and I’m not sure if either of us are completely right or wrong. Who am I kidding… of course my take is right, I’m always right… right?!

While I probably should open the ‘take’ debate up here, I’m not really willing to share our differing takes with you at this point for fear of sowing a seed and spoiling your own take. If you do manage to see the show before it closes at The Blue Room Theatre on Oct 6 (and for the record, I think you should), I would love to have a debriefing session with you.

What I will say for now… if my take on the show is remotely on track, I would have to question the armpit hair of the umpire. Was it a purposeful choice by the powers that be (aka the director) and therefore sending a message, or simply an actor’s prerogative and I’m completely overthinking things? I’m guessing, I’m the only person that would question armpit hair (not that I have an issue with it). I’m certain given the amount of thought that has gone into every detail of this production, you’ll walk away from this thought-provoking show with more than a few questions and start a few conversations of your own.

What happens when two people from seemingly opposite worlds collide and are forced to question their own identity and beliefs? What rules do we abide by, both subconsciously and consciously, due to sexuality and gender?

I should add, this show runs for 85 minutes without an interval and comes with a few warnings…

Most definitely one of my favourite productions since moving to Perth almost a decade ago and the most interesting show I’ve ever seen. I’m looking forward to seeing what comes next from not only the director/writer James McMillan but all three performers as well.

4 worth casing stars out of 5!

Managing Editor at Agent Mystery Case
Follow Raychael aka Mystery Case on her mystery adventures 'casing' people, products and places to bring you her worth casing favourites.
*I started really young! We were gifted tickets for review purposes. As you would know by now, gifted tickets and sponsorship have no bearing on my ability to over-share tell it like it really is. Tickets are only $20-30 through The Blue Room Theatre. More than worth it, in my eyes!