A sweeping story of love and ambition from England to the Manhattan of the 1920s and 1940s by the author of A KISS FROM MR FITZGERALD.

1918, England. Armistice Day should bring peace into Leonora's life. Rather than secretly making cosmetics in her father's chemist shop to sell to army nurses such as Joan, her adventurous Australian friend, Leo hopes to now display her wares openly. Instead, Spanish flu arrives in the village, claiming her father's life. Determined to start over, she boards a ship to New York City. On the way she meets debonair department store heir Everett Forsyth . . . In Manhattan, Leo works hard to make her cosmetics dream come true, but she's a woman alone with a small salary and a society that deems make-up scandalous.

1939, New York City. Everett's daughter, Alice, a promising ballerina, receives a mysterious letter inviting her to star in a series of advertisements for a cosmetics line. If she accepts she will be immortalized like dancers such as Zelda Fitzgerald, Josephine Baker and Ginger Rogers. Why, then, are her parents so quick to forbid it?

HER MOTHER'S SECRET is the story of a brave young woman chasing a dream in the face of society's disapproval.

Natasha Lester worked as a marketing executive for cosmetic company L’Oreal, managing the Maybelline brand, before returning to university to study creative writing. She completed a Master of Creative Arts as well as her first novel, What Is Left Over, After, which won the T.A.G. Hungerford Award for Fiction. Her second novel, If I Should Lose You, was published in 2012, followed by A Kiss From Mr Fitzgerald in 2016. The Age described Natasha as “a remarkable Australian talent” and her work been published in numerous anthologies and journals.

In her spare time Natasha loves to teach writing, is a sought after public speaker and can often be found playing dress-ups with her three children. She lives in Perth. For all the latest news from Natasha, visit www.natashalester.com.au, follow her on Twitter @Natasha_Lester, or Instagram (natashalesterauthor), or join the readers who have become Natasha’s friends on Facebook.

WHAT OTHERS ARE SAYING:

‘Had me at page one. This book should come with a ‘Do Not Disturb’ sign.’ VANESSA CARNEVALE

ON THE BOOKCASE REVIEW

I was gifted an uncorrected proof edition. As far as I could tell, there were only a handful of noticeable mistakes, the story and style of writing meant I wasn’t focusing on finding mistakes, more enthralled with the period (1920s to 1940s), the people, the story and of course the secret. A secret that keeps you guessing to almost the last minute.

I actually read Her Mother’s Secret in two sessions, just prior to catching up with the author at one of her talks promoting the book at my local library. It took me two sessions because my days of pulling an all-nighter and pushing all my other responsibilities to one side to finish a book, even one I’m really into, are well and truly over.

I’m going to be brutally honest here and say I wish I hadn’t started back with book reading after a seriously long break, with this particular book. There are a couple of reason why.

Make no mistake, I was really into this book!

On finishing, I found myself wanting to delve straight back in or even better, somehow discover a sequel was just around the corner.  That’s not to say that the story leaves you on a cliff hanger. Far from it. I just really connected with the characters, the descriptive fashion, the love story but especially Natasha’s style of writing. As a result, I found it really hard to pick up another book and dive straight in after this one. I needed something to cleanse the palate before I could move on to my next book and the attending Natasha’s author talk at my local library almost helped.

Natasha’s descriptive nature when it came to articulating the fashion throughout the book intrigued me. I’m more of a visual person though, which had me secretly hoping to find a drawing or two throughout the book. There wasn’t but my disappointment wasn’t long lived and I was delighted to discover that Natasha commissioned one my favourite Perth illustrators Michelle Pike to bring two of the designs to life in the way of postcards and the designs were just as I imagined. 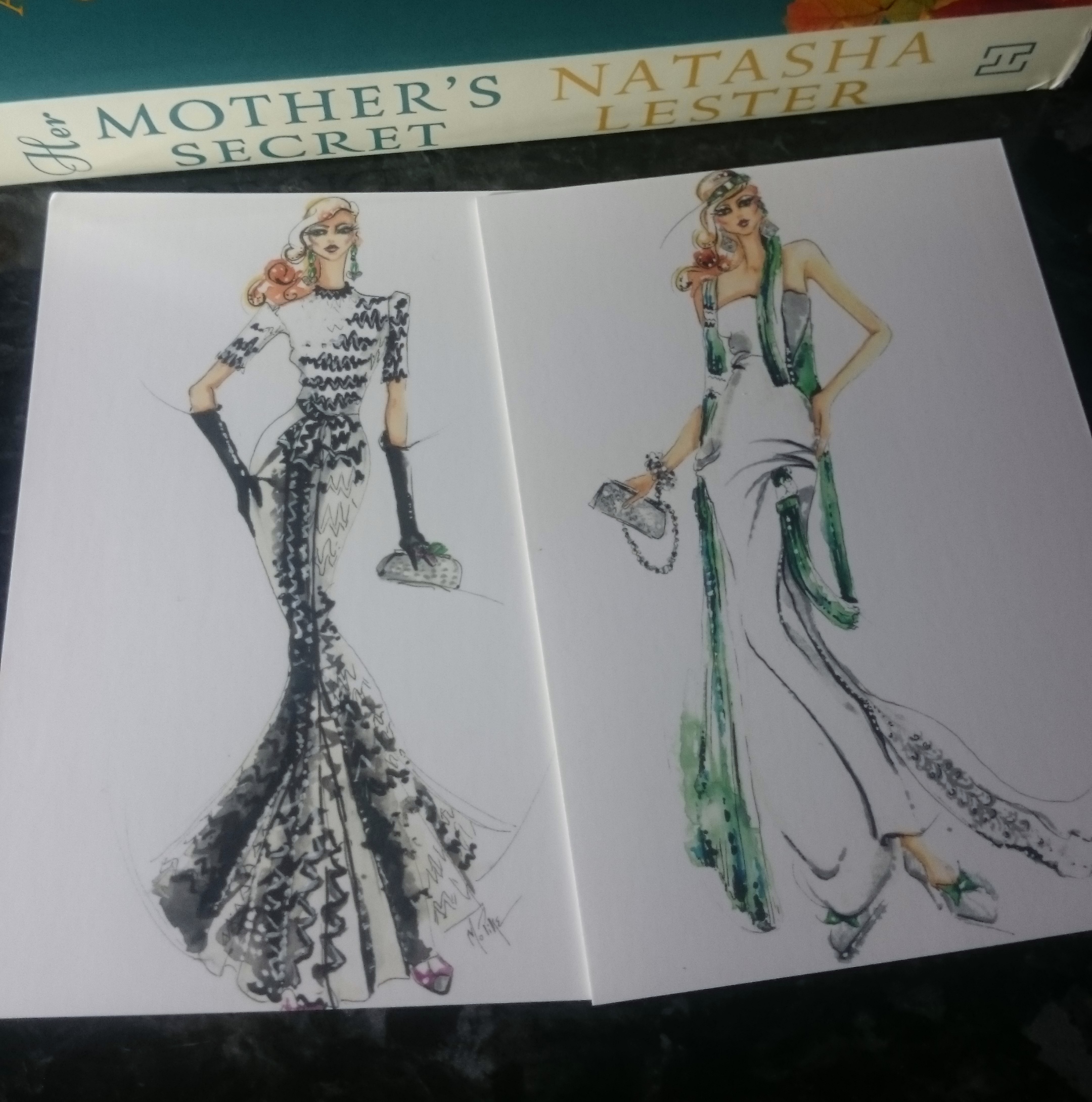 Which started me thinking… wouldn’t it be wonderful if after falling hard for a book, you could jump online to meet the characters, catch a glimpse of the fashion they were wearing or the places they were living. The next best thing of course is meeting the author and hearing all about her writing process and the inspiration behind the book. It is in fact a story in itself.

I loved Her Mother’s Secret so much, I gifted a copy to Cathy O’Brien (Life Through the Haze) to keep her suitably distracted following her recent surgery and I quickly put my hand up to review A Kiss From Mr Fitzgerald. It arrived this week and I can’t clear my schedule fast enough.

You can find out more about what’s currently On the Bookcase at AMC {HERE}!