Perth friends, if you have been umming and ahhing about seeing the latest Cirque Du Soleil show KOOZA, now playing at Belmont Racecourse under the Grand Chapiteau, you had better get your skates on. KOOZA is in its final days here in Perth (ends June 11) before heading to Singapore for a July 12 opening.

Your first experience with Cirque Du Soleil is a lot like giving birth for the first time. You can read all there is on the subject in the lead up but nothing quite prepares you for the sheer pain and exhilaration you’ll encounter. Mystery Case

KOOZA? The back story…

Cirque du Soleil is an awe-inspiring production presented in the intimate setting of the blue and yellow Big Top (the Grand Chapiteau) at Belmont Racecourse in Perth. Already seen by over 7 million people around the world, KOOZA pays homage to Cirque du Soleil’s roots by combining thrilling, heart stopping acrobatic performance with the hilarious art of clowning around.

The name KOOZA is inspired by the Sanskrit word “Koza” which means “box”, “chest”, or “treasure” and emerging from this magical box is an international cast of 50 acrobats, musicians, singers and actors from 19 different countries performing physically astonishing feats and laugh-out-loud antics to a live soundtrack fusion of jazz, funk and Bollywood beats.

The KOOZA story follows “The Innocent” who represents the child within us all, as he takes a journey of self-discovery through a kingdom of eccentric characters, electrifying thrills and out-of-the-box surprises. Presented in a colourful medley of costumes and characters, KOOZA springs open like a bejewelled toy box to capture the audience’s imagination and set pulses racing.

UNDER THE BIG TOP | UNDER REVIEW

I must confess, I found the start of the show a little chaotic and all over the place. All part of the master plan I suspect to distract and delight the audience, keeping us on our toes in the process. There’s a moment a few minutes in, when a court jester jumps out of the bejewelled toy box, like a Jack in the box, that the show really comes to life, grabbing you by the short and curlies and from this point in, it doesn’t let you go.

I’m not sure I can comfortably say I didn’t know what to expect for this show. I’d read the hype. Who hasn’t?! With promises of death defying acts and heart stopping moments, there’s a certain element of anticipation. The truth is, I honestly had no idea what to expect but the show delivers on its promises and it is safe to say, KOOZA exceeded all my expectations.

For most of the show, I honestly didn’t know where to look. It’s not that there was so much going on, although the entire stage was always visually inspiring. It was more a case of my heart in my mouth during most of the performances. On one hand, I found it hard to keep watching, painful even. On the other hand, it was hard to look away. I may have inadvertently exclaimed “Oh my goodness” several hundred times throughout the show. My broken ribs were probably the only reason I wasn’t literally on the edge of my seat the entire show.

KOOZA really is a colourful mix of magic, humour and death defying acts that showcase the strength and sheer talent of the performers. This is a circus on a whole different level. That level occasionally including performances suspended high in the air and a lot of the time without a safety net or harness.

I’m not sure I could choose a favourite act from the show. If I was going to rate the acts, it would probably be in terms of how many “OMGs” escaped from my mouth or how many gasps came from the audience during each performance. There was, on this occasion, a particularly hair-raising moment where one of the duo on the Wheel of Death appeared to trip on his skipping rope while suspended high in the air on a fast moving, what I referred to as an oversized spinning hamster wheel. 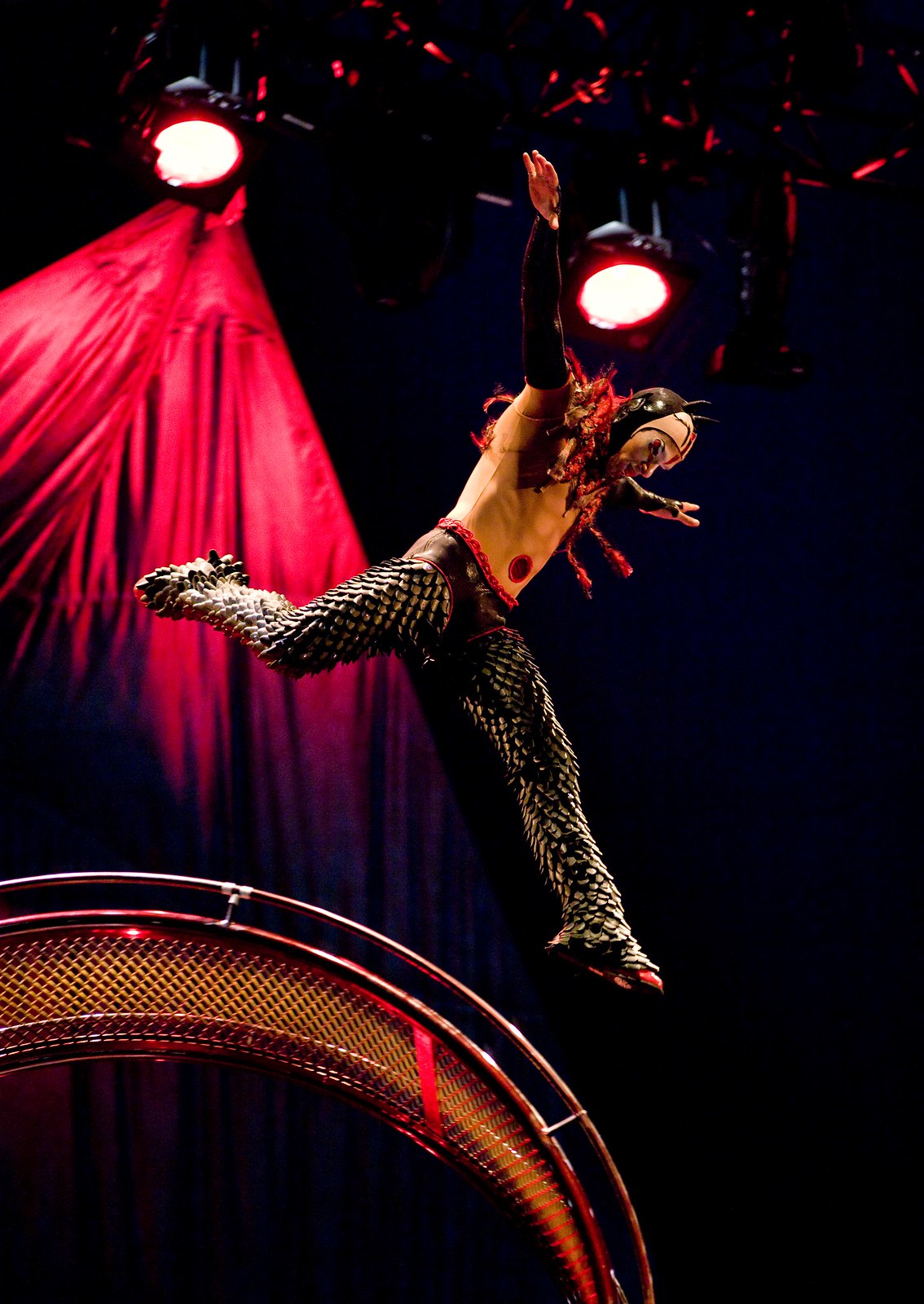 The fact the contraption is referred to as the Wheel of Death, kind of makes me question if the slip up wasn’t actually part of the act. Either way, the performer’s quick recovery was as impressive as the entire act itself and the duo were a real crowd favourite. As were the high wire quartet, where twin high wires hang at 15 and 25 feet above the stage. 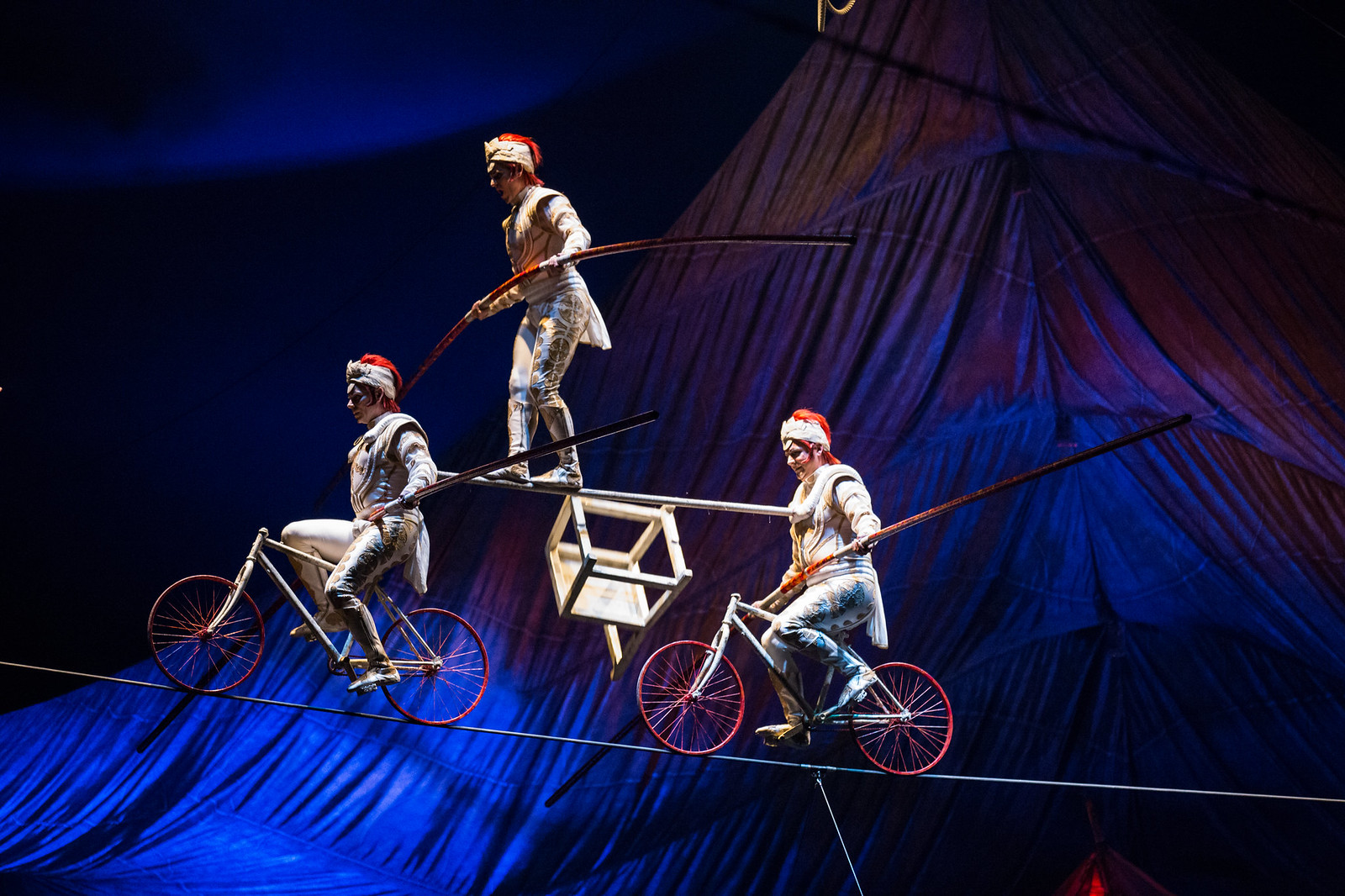 For me, it was also the detailed costumes and the live music that added to the entire experience. It’s a theatrical masterpiece from start to finish. I found myself mesmerised by the three contortionists and was left wondering on several occasions just how the performers managed to pull certain aspects of the show off and baffled by the shows little use of safety harnesses and nets. 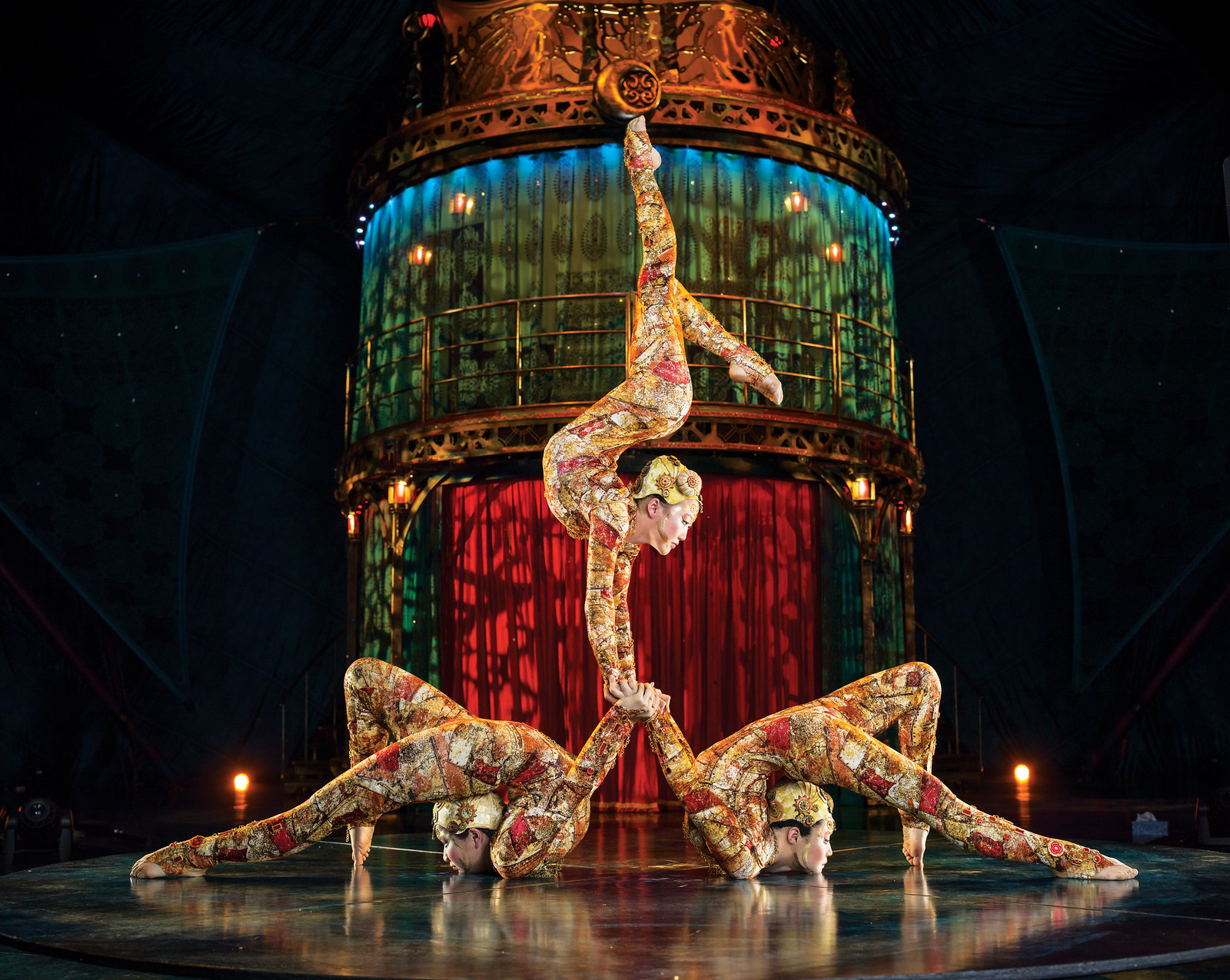 The entertainment aka distraction in between acts while the stage was set for the next ‘stunt’ was hilarious in part, as well as captivating and chaotic. The occasional audience participation and bringing the performers into the audience worked well and like I said, kept us suitably distracted while props and equipment were moved on and off the stage, helping the acts to appear seamless rather than disjointed.

Clowns, a ballerina, a policeman, a thief and a dog that cocks his leg and actually pees at one point, narrowly missing the audience, all adds to the hilarity getting your heart rate down before the next death-defying act. BUT… I’ve already said too much. Like all my reviews, I prefer not to include too many spoilers or go into too many specifics and spoil the show for you. Where’s the fun in that?!

What I will say… this show is enthralling and a whole lot of fun. My entire family were captivated and loved every single heart racing moment. A rarity, given our different tastes. If you’ve been thinking about seeing this show before it departs Perth for Singapore, you have until June 11!

KOOZA gets 5 out of 5 worth casing stars from me. YES, it is that spectacular!