We sent one of our Melbourne reviewers into the thick of it for opening night for The Play That Goes Wrong this week. Thankfully, Jody (Six Little Hearts) made it out in one piece to report back.

The Play That Goes Wrong 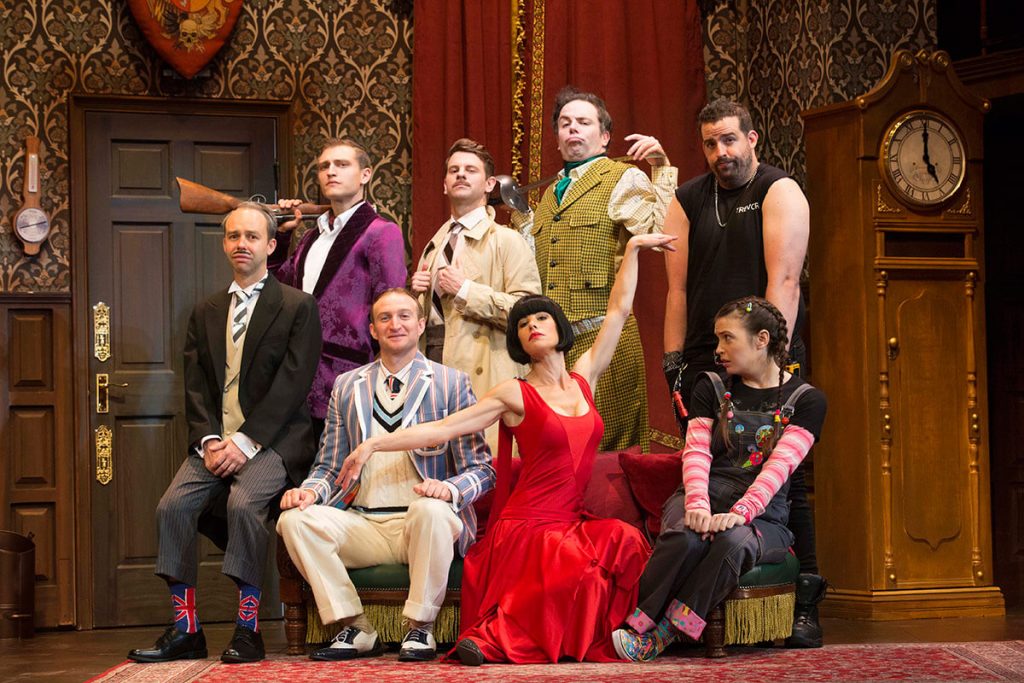 UK’s Olivier Award-winning theatre company Mischief Theatre has brought its masterpiece comedy The Play That Goes Wrong to Australian audiences for the first time ever, and this is one live show you simply must schedule the time to see.

We caught a glimpse of all the star-studded glamour and hilarity at the recent Gala opening at the Comedy Theatre in Melbourne, where this critically acclaimed play’s Australian tour kicked-off with a jovial bang.

The Friday night red carpet line-up was a who’s who of Melbourne A-listers with many celebrities in attendance; from Stefan Dennis of Neighbours fame, to Frankie J. Holden and Michelle Pettigrove, as well as meteorologist and weather presenter Jane Bunn of Seven News in Melbourne. (Plus many more.) 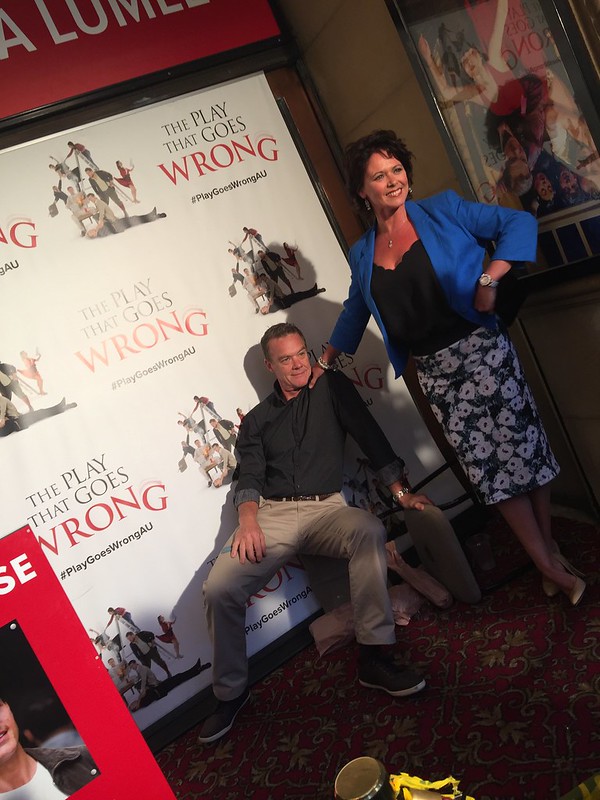 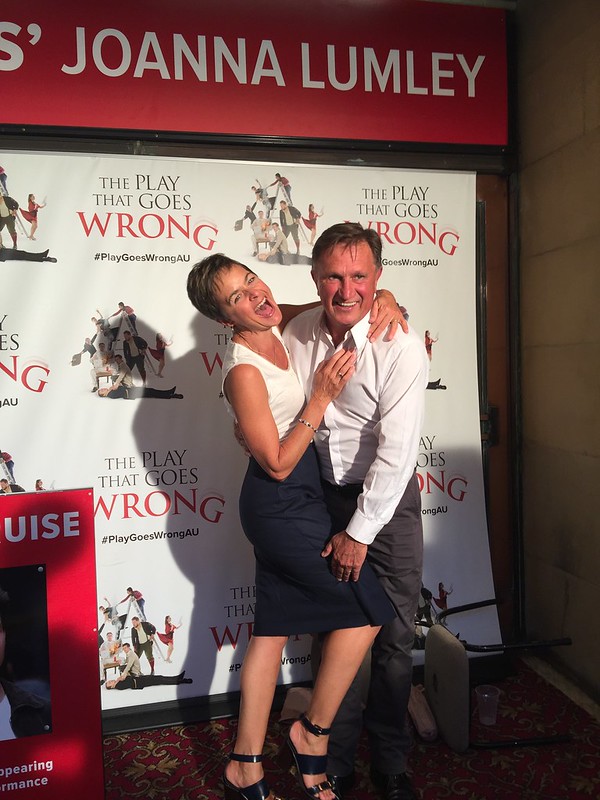 As the title suggests, The Play That Goes Wrong is a theatre production that is fatally and spectacularly doomed from the outset. Essentially this production is a slapstick, humour-filled melodramatic masterpiece, taking place within a theatrical production itself. Sounds confusing yes, but it’s so clever!

The play within the comedy of The Play That Goes Wrong unfolds as a stuffy 1920’s English-styled, pompous theatre production of The Murder at Haversham Manor, enacted by the stoically proud, yet pathetically incompetent players of the Cornley Polytechnic Drama Society.

The cast of hammy thespians, (played skillfully by Brooke Satchwell as the glamorous Sandra, Adam Dunn as Trevor and Tammy Weller as the youthful, inexperienced and unsure-of-herself stage manager Annie Twilloil), make an earnest attempt to deliver their performances in The Murder at Haversham Manor flawlessly, but are invariably met with a series of hilarious ineptitudes and catastrophic events that bring about the uproarious chaos and mayhem that ensues. (Hence the working title – The Play That Goes Wrong.) 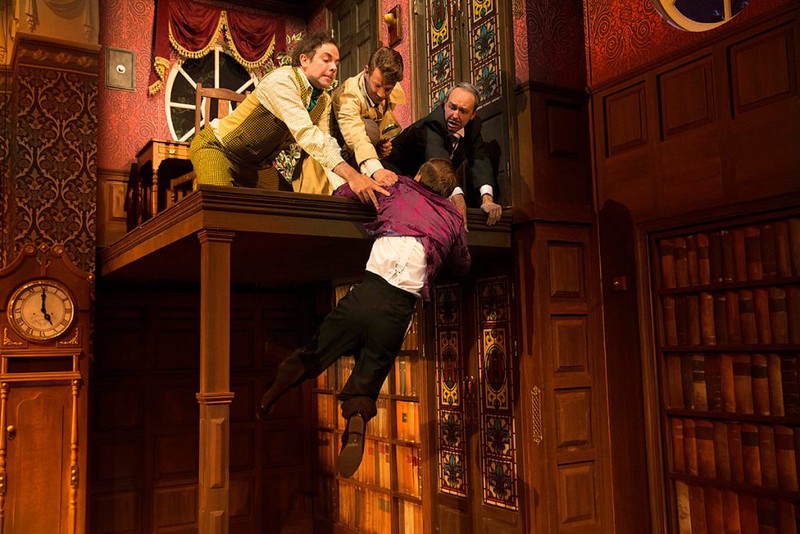 From a constant stream of errors and mishaps both large and small, the fatally flawed play of The Murder at Haversham Manor stubbornly propels itself forward with a very British ‘the show must go on’ attitude, amidst this whopping side-serve of pandemonium that eventually consumes the production itself.

The characters in this show provide only half the fun though. Couple these bumbling inadequacies of the struggling cast and crew, with a physically uncooperative stage set that frequently collapses upon itself and ‘misbehaves’ in delightfully artful ways during key plot moments, and the should-be-background (and props), manage to add a polished level of humour all on their own. It’s the successful amalgamation of all of these elements combined, that provide the gut-busting source of amusement for which The Play That Goes Wrong garners its acclaim.

There are innumerable clever and laughable undercurrents operating throughout this play, such as ill-timed cast entries, a missing yet crucial (to the play) dog, and an evolving stream of jealousies that peak between cast and crew. As the plot unfolds (and in more ways than one!), it barrels along until it becomes irrevocably undone.

The slapstick tempo increases to such a degree, that eventually the who, what and why of The Murder at Haversham Manor become of little relevance at all to the audience, and it all culminates spectacularly, until you simply won’t believe what you are seeing. This is a play that will leave you crying with laughter! 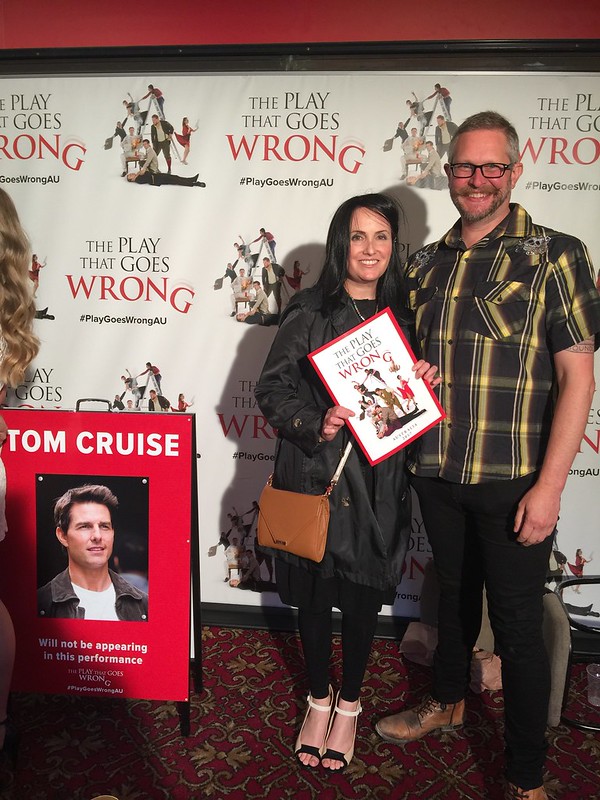 We absolutely loved this and urge you not to miss it! 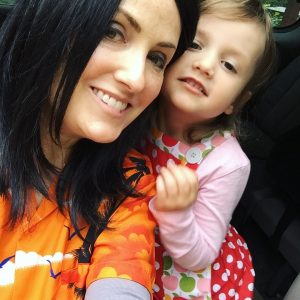 Melbourne Reviewer
Jody is the creator behind the popular parenting website Six Little Hearts. Based in Melbourne, Jody is an experienced mum to six young kids. Jody's website covers everything from parenting topics and food, as well as reviews of all things of interest to families including events and regular giveaways too!

** We were gifted tickets to this show ** As is the case with all our reviews, opinions are our own and not influenced by gifted tickets, red carpet shenanigans or the fact it may have been the reviewer’s first child free date night this year.

About Jody Scott-Greer 1 Article
Jody is the creator behind the popular parenting website Six Little Hearts. Based in Melbourne, Jody is an experienced mum to six young kids. Jody's website covers everything from parenting topics and food, as well as reviews of all things of interest to families including events and regular giveaways too!
Website