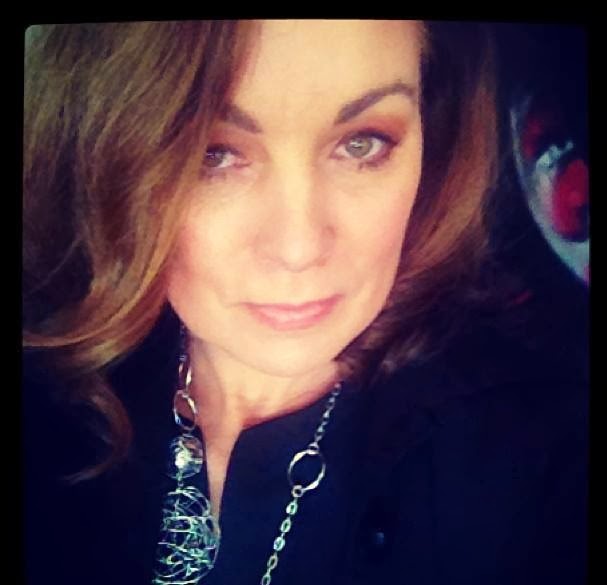 Why our latest date day didn’t quite go to plan….

and how we ended up getting our sexy balls on!!

A couple of weeks ago now, Mr C surprised me with tickets to an advanced screening at the cinema and what a surprise that turned out to be!

I must confess, we spent the previous day at the movies for a film that was just a few minutes shy of being three hours long. After hearing the hype surrounding the film Boyhood, I found myself thoroughly intrigued by the concept and really looking forward to our date day at the cinema. 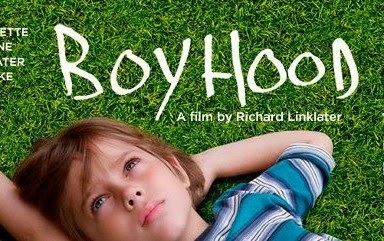 “Filmed over 12 years with the same cast, Richard Linklater’s Boyhood is a groundbreaking story of growing up as seen through the eyes of a child named Mason (Ellar Coltrane), who literally grows up on screen before our eyes. Starring Ethan Hawke and Patricia Arquette as Mason’s parents and newcomer Lorelei Linklater as his sister Samantha, Boyhood charts the rocky terrain of childhood like no other film has before and is both a nostalgic time capsule of the recent past and an ode to growing up and parenting.”

I’m a huge fan of both Richard Linklater and Ethan Hawke, so I had huge expectations for this film. I assumed it would be somewhat compelling and hold a degree of substance to warrant filming over 12 years using the same actors.

The film started off slow and didn’t really gain much momentum the entire film. There were elements of charm, a degree of insightfulness and you couldn’t fault the acting. The concept itself was intriguing but honestly I found the film twelve years of bland as did Mr C. I should add the film has been described as ground breaking and epic by others and this isn’t a review, just my thoughts after seeing the film and wanting my three hours back. It just wasn’t for me.

So when Mr C sprung another movie on me the following day I wasn’t sure what to think and I almost wanted to run in the opposite direction. Arriving at Luna Leederville with two minutes to spare, with the cinema empty, we discovered we were in fact an entire week early. Having just paid for two hours parking and appreciating the quirkiness that is Oxford Street Leederville, which was just starting to come alive around us at 11 am on a Saturday, we decided to make the most of our time and went exploring.

I’d been keen to check out a new addition just off Oxford Street, The Meatball Bar and ‘case’ the menu at the very least. However, the doors sprung open on our approach and we took that as a sign and dived in empty stomachs first.  We were also lucky enough to find Giovanni Pezzano one of the owners in when we arrived. 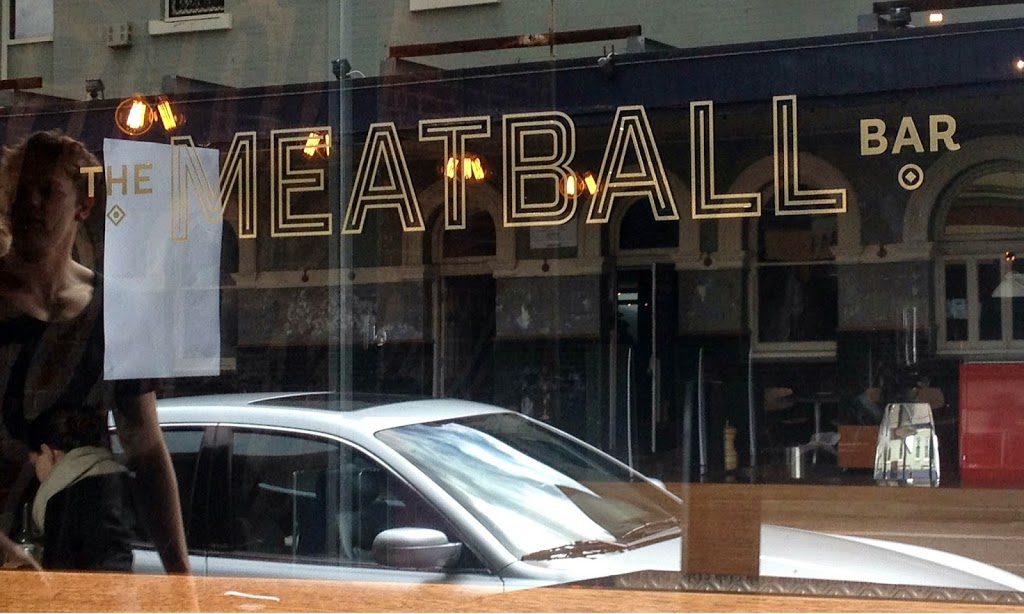 Even on opening at 11.30 am (Saturday), the place quickly filled up. With a number of clientele popping in for a quick coffee and others like ourselves keen for a great balls of fire adventure. Not entirely sure where to start and completely overwhelmed with the choices, we put caution to the wind or in this case left our menu choices up to Giovanni and we weren’t disappointed. In fact quite the opposite.

We didn’t need any convincing to get the ball rolling with the bocconcini fritters with pesto. We are huge bocconcini fans and tend to buy ours in 1 kg bulk buckets, which means we are always looking to ‘case’ different recipes. These divine balls are best devoured straight away while the cheese is at the perfect melt in your mouth consistency, so it’s possibly a good thing I only had my iPhone on me to snap the odd rather quick photo. 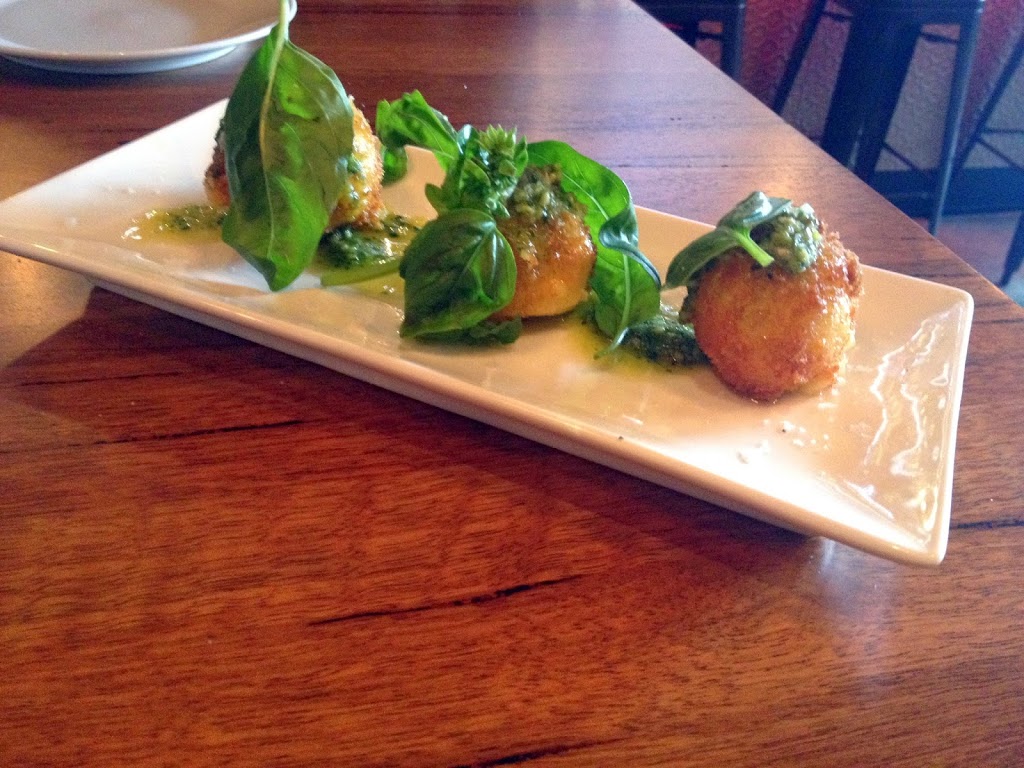 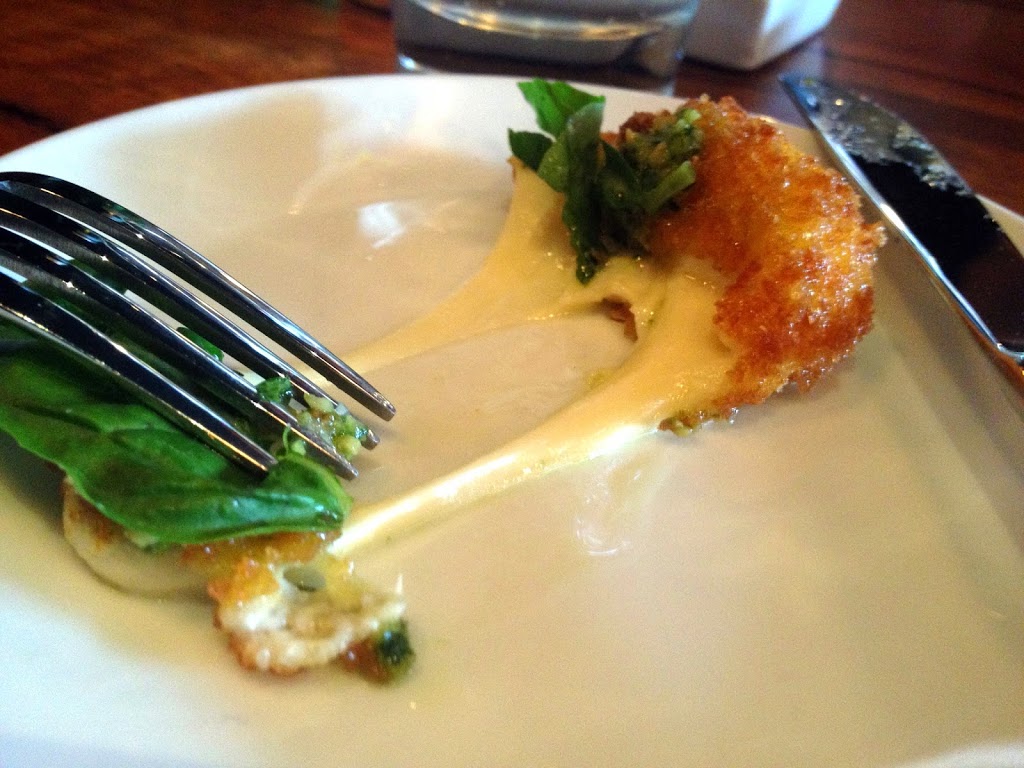 Next we moved on to The Ballbreaker, which we shared. A taster plate with three different balls selected by the chef, served on this occasion with onion rings, aioli and a middle side serving of fries. If like us, you find yourself drooling at most of the menu and are having trouble deciding then this really is a great option. Personally, I could have done without the fries because in hindsight there would have been room for dessert but the chips, like the rest of the food was super fresh and Mr C didn’t have any issues polishing them off. 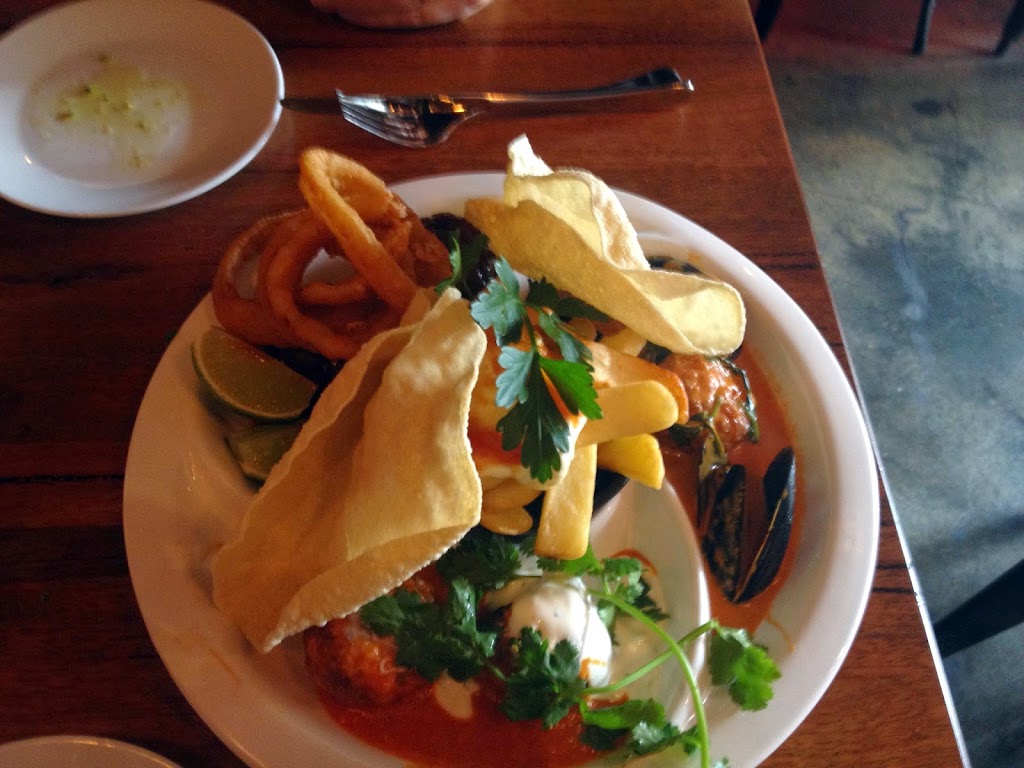 The chef selections for The Ballbreaker platter ended up being Pure Pork with BBQ house sauce and two dishes from the Sexy Balls menu (Butter Chicken, Raita & Garlic Prawn, Mussels with Lobster Cream).

The garlic prawn sexy balls were definitely my favourite on this occasion, a little something to do with the texture and a whole lot to do with the lobster cream. Now the lobster cream isn’t going to be for everyone. It really has that strong authentic seafood flavour that I’ve come to expect with top quality lobster dishes. If I had to sum the flavour up in one word it would be ‘Inhale-able‘. It was that GOOD! The butter chicken is cooked in-house from scratch and a house specialty given that one of the owners Badri Gosavi also has a hand in the 2 Fat Indians, a local and rather well regarded Indian Restaurant. While I loved the butter chicken, we tend to have a lot of butter chicken in our household as it’s a dish the entire family likes, so I probably wouldn’t have selected it from the menu. 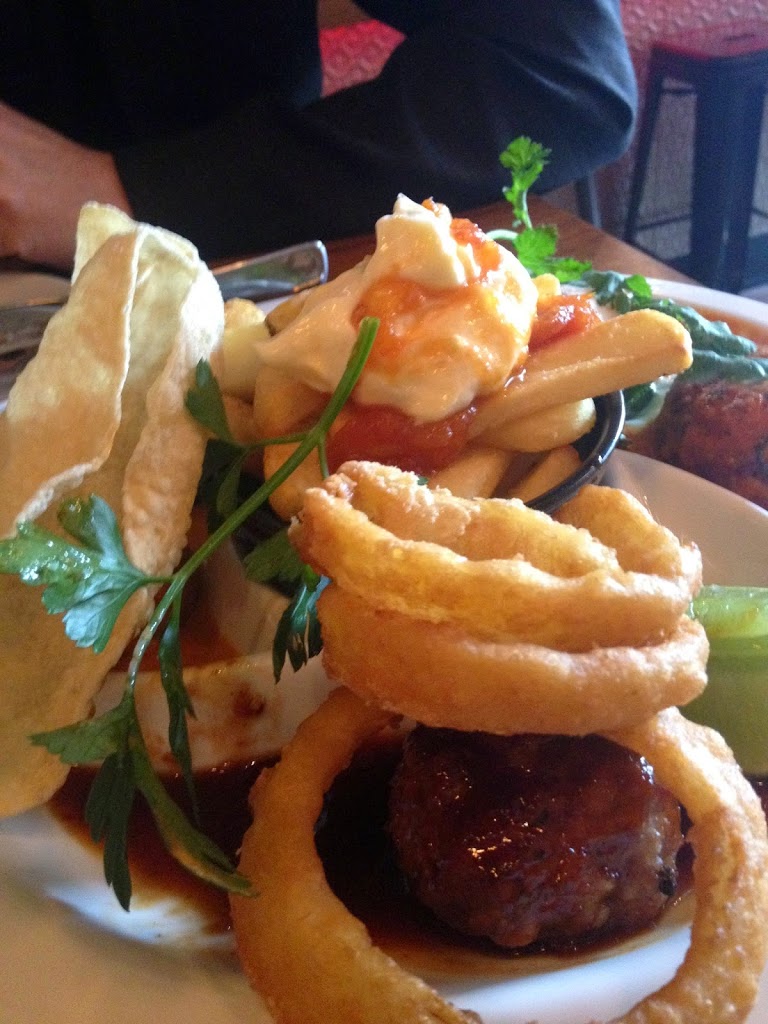 The flavours in the pure pork were insane (that’s a good thing as far as my tastes buds are concerned), mainly down to the house sauce which I believe has an espresso base. 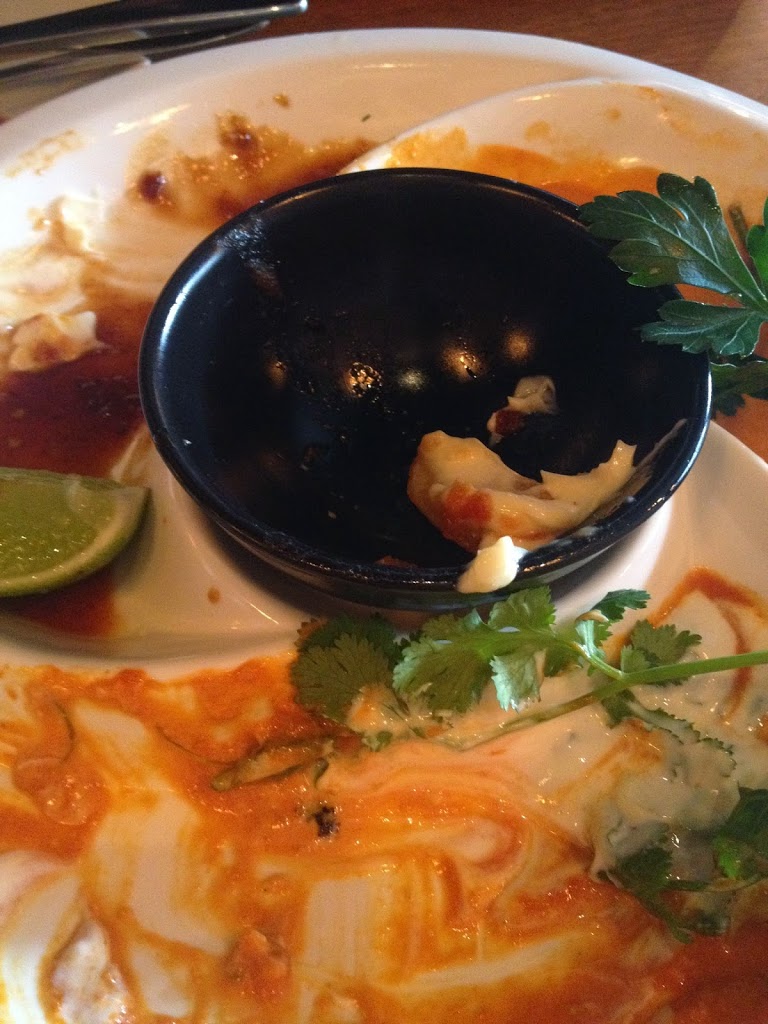 There honestly was no room for dessert but with homemade Tiramisu on the menu, Mr C couldn’t resist when Giovanni placed a little sampler in front of him.  Mr C is a bit of a Tiramisu critic and this was one of the best if not the best he has ever tasted and that’s saying something because in the twenty years I’ve known him he has sampled more than a few. 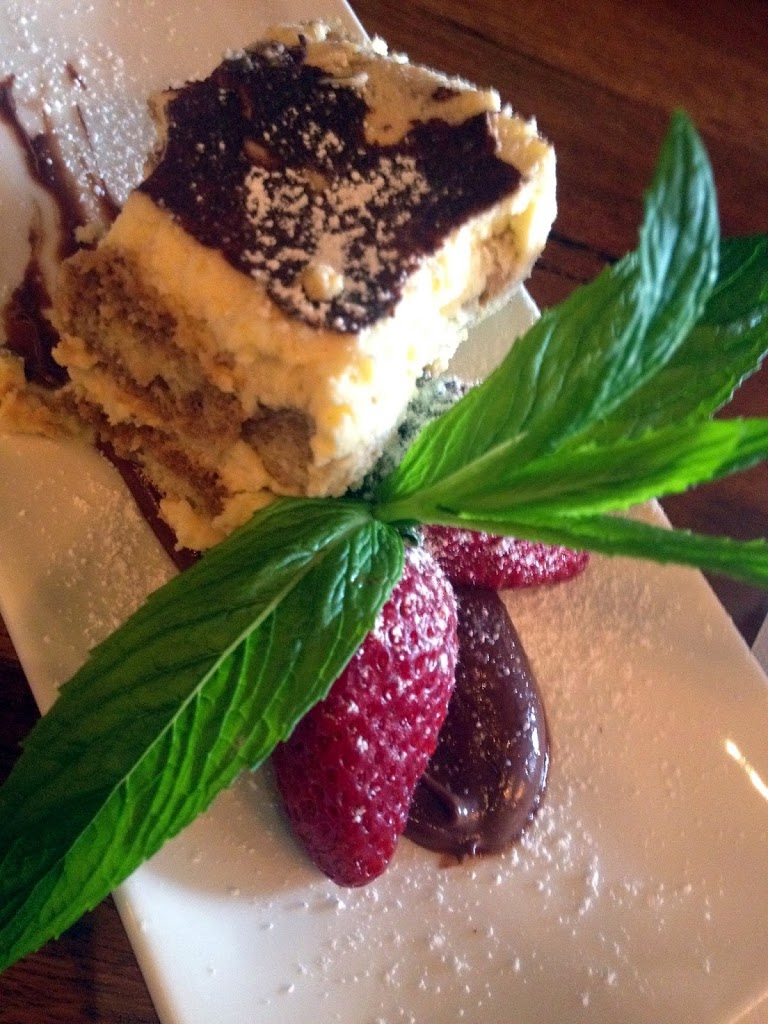 We will be back, not just for the amazing food on offer but also the top rate service. Next time round we plan on starting with the dessert menu and I don’t mind the sound of Ive’s HUMONGOUS BBQ chilli nachos balls with salsa, sour cream, cheese and jalapeno guacamole!!

When was the last time your plans didn’t quite go to plan and you ended up doing something more amazing?